What will become of the retired detective and his nemesis, Big Ger Cafferty. Will they fall into friendship or kill each other? Not even their creator, Ian Rankin, knows 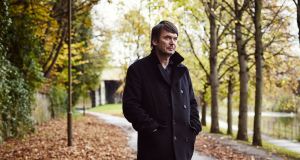 Ian Rankin: “Rebus and Cafferty are a couple of dinosaurs, aren’t they? The last of their kind”

He’s one of the best-loved characters in crime fiction. Ask any reader of detective novels about DI John Rebus, and they’ll tell you about his love of a wee dram, his distrust of authority and his habit of falling asleep in his armchair looking out the window over Edinburgh. His bizarre conversations with barmen. How, despite having two different actors – John Hannah and Ken Stott – playing him on the telly, they’ve never quite nailed him.

And then there’s his staying power. Rebus shouldn’t even be in Ian Rankin’s new novel, Even Dogs in the Wild: he retired three books ago. He can’t keep his nose out of the murderous business of the Lothian and Borders Police, which is good news for readers.

But there’s a moment near the beginning of the new book that stopped this reader in her tracks. Rebus has just walked in to the house of his nemesis, the gangster Big Ger Cafferty, who is the Moriarty to Rebus’s Sherlock. “They were old men now, similar build, similar background,” Rankin writes. What? Rebus and Cafferty – old men? Surely not?

Rankin chuckles. “Well,” he says, “65ish. They are a couple of dinosaurs, aren’t they? The last of their kind. And the world is moving ever faster around them. Both of them are wondering if they’ve got one good fight left in them. So far there’s always been one good fight in them.”

He stops, shakes his head, chuckles again. “I’m never very sure with those two if they’re gonnae end up best friends or killing one another.”

Neither is the reader, which is partly why, after all these years, the Rebus series remains so engrossing. The opening sections of Dogs in the Wild, for example, show us an unexpected side of the once all-powerful Cafferty: the vulnerable elderly man. “All the time I’m writing the book, I don’t really know what game Cafferty’s playing,” Rankin says. “I’m never 100 per cent sure. Is he leading people along? Does he know more than he’s saying? He’s playing a very long game, I think.”

Master of the long game

Rankin, too, is a master of the long game. His first Rebus novel, Knots and Crosses, was published nearly three decades ago, in 1987. What has kept him writing the series? “I’m interested in themes and questions, and the crime novel is an attempt to look at big moral themes, I suppose. Why do we keep doing bad things to each other? Getting beneath the psyche of Edinburgh, trying to dig a little bit further below the surface of the city, and using that as a microcosm for Scotland as a whole.

For readers, one of the many delights of the series as a whole has been its excavation of what might be called Edinburgh’s psycho-geography. There’s a wonderful scene in Let it Bleed that finds Rebus laid out in a dentist’s chair, studying a map of the city spread out on the ceiling – a network, as he sees it, of catastrophic interconnected crime scenes.

Rankin begins each book by getting his stories and his characters lined up. “First I get a theme I want to discuss, and then I get a plot that allows me to do that, and then I think, Which character or characters do I need for this?” At the heart of Even Dogs in the Wild is the theme of fathers and sons. The book assembles a visiting father-and-son gangster team from Glasgow, the very dapper local criminal Darryl Christie, who may or may not accept the role of Cafferty’s surrogate son; and Rebus’s colleague Malcolm Fox, whose father is dying, prompting some serious heart-searching on Fox’s part.

“So I thought, Well, who’s in the garden? Why are they doing it? And what would Cafferty do about it? He couldn’t go to the police because that would be a sign of weakness, but Rebus is no longer a cop. So maybe he could ask Rebus for help. Or maybe Rebus would inveigle his way in. So suddenly I’ve got three plots and three things, something for each of the characters to be focused on. Then the fun part is trying to see if I can connect them. When I start the book I never know if they’re gonnae connect. I never know the endings of the books when I start them.”

It’s the sort of thing only a supremely confident crime writer could say. He may not know how he’ll do it, but on some level he knows he can. Rankin has been honing his craft for a long time, although he insists that he got into crime-writing by accident, while researching a PhD on the novels of Muriel Spark. The Prime of Miss Jean Brodie led him to the real-life criminal William Brodie, who is thought to have been the inspiration for Robert Louis Stevenson’s novel The Strange Case of Dr Jekyll and Mr Hyde.

“That figure of the doppelganger is important in Scottish fiction: the idea of the good person who is also an evil person,” Rankin says. “The first Rebus novel was meant to be an updated version of Jekyll and Hyde. Rebus was meant to be a potential suspect; that was how I was thinking of it. He might be the killer. He keeps having memory blackouts, and there’s a locked room in his flat and all the rest of it.

“Anyway, that didn’t happen, but the book was published as a crime novel because he was a detective. When it came to the second Rebus novel, I thought, Right, this time I’m going to try and do Jekyll and Hyde again.”

Hide and Seek featured a private members’ club called Hyde’s, where rich and powerful men went at night to watch illegal boxing. “And still nobody got it,” Rankin says. “It was published as a crime novel and reviewed as a crime novel. So I thought, Oh, okay, I’m a crime writer. That was it. The die was cast.”

The literary crime scene in the late 1980s, when the Rebus series began, was very different to today’s, not least in the sheer number of books being published now.

Which is one thing Ian Rankin can be sure of. His last two Rebus titles both hit the No 1 spot in the UK publishing charts, and early indications are that Even Dogs in the Wild will do the same.

But what does the future hold for John Rebus? He might be retired, but it’s hard to see him taking up golf. Rankin laughs. “No. Opening a B&B? No. Driving a cab? No.” Working as a barman, maybe? “Hmm. Yeah. Maybe not. I wouldn’t trust him with a tap,” he says.

But we haven’t seen the last of him. Have we? “I think . . . I hope . . . I mean, I don’t know. There’s never been a long-term plan. I would hope there’s at least one more book that I’ll write early next year. I’ve got nothing at the moment. I’ve not got a title or a theme or a plot. But it feels like it might be a Rebus book. I think I can get one more book. That’s all you need, right? As long as you think you’ve got one more book in you, you’re all right.”

The Rebus novels may vary greatly in tone and subject matter, but music is a strong unifying theme throughout the series. The current title, Even Dogs in the Wild, refers to a 1980 song by the Scottish band the Associates.

While Rebus’s musical tastes are on the Stone Age side of conservative – he sticks with The Steve Miller Band, Muddy Waters and mid-period Stones – his creator is well up to speed on the latest Scottish sounds. So what’s on Ian Rankin’s personal playlist at the moment?

“There’s a guy called Joe McAlinden, calls himself Linden – he’s got a great album Rest and Be Thankful, with beautiful artwork by the visual artist Jim Lambie. There’s C Duncan, who was just shortlisted for the Mercury Prize: a young guy who works as a waiter in Glasgow. Did it all in his bedroom. Beautiful singer-songwriter; very laid-back, very quiet, very introspective.

“Who else have I been listening to recently? There’s a guy called Blanck Mass. He’s a DJ, hardcore electronica, puts on a great show. He’s not Scottish, but he has moved up and I’ve got to know him a bit because he’s friends with Mogwai. I know the guys from Mogwai, so they put us in touch.”