I Was Jack Mortimer, by Alexander Lernet-Holenia

Set in Vienna, this fast-moving thriller, first published in 1933, reads as if it was written yesterday 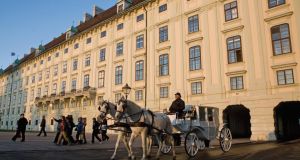 A horse-drawn carriage at the Imperial Palace in Vienna. Photograph: Scott Barbour/Getty Images

Book Title:
I Was Jack Mortimer

Several clues to the strangeness that governs human nature are to be found in this astute thriller by a writer who came to maturity just as the sun was about to set on the Austro-Hungarian Empire. Alexander Lernet-Holenia was born in Vienna in 1897 and served in the Great War. He was a traditionalist, yet I Was Jack Mortimer reads as if it was written yesterday. Very few novels published in recent years match its daunting panache. The fast-moving, cleverly convoluted plot is brilliantly served by the sustained irony of Ignat Avsey’s witty translation.

So what happens? Without revealing too much, the narrative revolves around a disgruntled cab driver, earning his living driving around Vienna. Ferdinand Sponer is good looking and bored. He has a devoted girlfriend who is as aware as he is that the romance is gone from their tired relationship. “And they thought how long they had already known each other – the text reads ‘another’ – Or rather, they didn’t think. They simply felt how unhappy they were.” Unsurprisingly, it does not take very much for him to decide that he has fallen in love with a beautiful female passenger who barely notices him.

Vienna shimmers throughout as Sponer drives his taxi, badly, through the streets. This is a novel of street scenes, traffic, chaos, snappy dialogue and exasperation – mainly Sponer’s exasperation. First published in 1933, the narrative evokes a beaten city still very much aware of its glorious past thanks to the memories of the previous generation: “In the café Zu den Zwei Schimmeln [Sponer] had a bite to eat with the commissionaire, who also had a few beers and regaled him and the other clients with tales of the former imperial court. In Vienna there were still quite a few of these old commissionaires, minor officials, former servants and the like, who sported side whiskers and waxed nostalgically about the Court, the Arcieren Life Guards, the huge tips dispensed by the foreign potentates, the Emperor’s house guests . . . Sponer, who was 29 and knew hardly anything about such things, listened without paying much attention . . .”

His pursuit of his passenger brings him to a fine building that merely reminds him of his poverty. The girl rejects Sponer’s attentions, and he finally gives up and wanders about until something happens. It takes him by surprise. Having waited his turn at the taxi rank at the train station, Sponer is engaged by a passenger who has just arrived on the Paris express. The man has luggage and is distracted. There are some sharp sounds, and a flurry of movement, and Sponer realises that his passenger has been shot dead.

Getting the attention of the police proves far more difficult than he imagined, as they are dealing with a drunk who appears to have the strength of three men. Sponer sets off, intent on ridding himself of the victim. He decides to throw the body into the Danube: “He filled the dead man’s pockets as far as he could with the stones, including those of the overcoat. Finally, he also stuffed stones down the trouser legs. Which he then tied fast at the bottom with his own coat belt to prevent the stones falling out, ands looped the ends of the belt round both legs.” His struggle to get the corpse into the water is very funny, as he is shocked by the unexpected weight of the dead man. The river itself acquires menace as Sponer strains to pull the body off the riverbank: “with a slight gurgle” it disappears.

As he drives away he wonders about the blood and is initially confident that the victim’s clothes must have absorbed it. Sponer, without having killed the man, has become a criminal. His mind is dominated by imagined conversations and a growing fear. Yet instead of collapsing he brings the cab back to the garage in preparation for going on duty and then discovers the large amount of blood inside the car.

Without giving much thought as to the identity of the dead man, Sponer then goes to the hotel into which he had been booked and discovers that the victim was an American named Jack Mortimer. Sponer assumes his name along with his belongings and clothes. Lernet-Holenia injects a psychological dimension that intensifies the narrative. It is curiously symbolic: the cab driver who has become so weary of his own existence proceeds to steal the life of a man who had died. It raises the question of what defines an individual personality.

Sponer ponders this as he knots the dead man’s red tie under his own face, reflects in the mirror into which he is staring: “The dead man who had lain in his car was being swept along by the river, attacked by fish, ground to pulp by rocks and boulders; he was floating downstream to Hungary; soon he would be less than a stain in the water or a rustle in the reeds. He was gone. . . The real Mortimer was not dead at all. He continued to live.”

Sponer is a bizarrely credible mix of calculation and panic. Doubts begin to heighten his paranoia. This novel has been filmed twice. It is not surprising.

The sequence in the hotel room is possibly the highlight of a terrific book, one to read and then urge everyone else to follow suit. As Sponer hovers on the fringes of a breakdown, there is a further complication; a woman arrives to see the dead man. She knows that Sponer is not Mortimer, but then she has her own problems and is intent on solving them.

Ambivalence is the element that often elevates a good book to a higher sphere, and it does so here. Sponer is a cad and, without any fear for her safety, involves in his crazy plight the one person who would help him: his hapless girlfriend. Instead of the standard car chase, which would certainly have a place in this narrative of street life and traffic, there is a manhunt focusing on the girlfriend, who emerges as daringly resourceful. It is a clever twist. But then this is a truly clever, rather wonderful book that both plays with and defies genre.

Lernet-Holenia, who died in 1976, aged 78, began his career as a protege of Rainer Maria Rilke, and did in time became a grand old man of Austrian literature. He was prolific. The lightness of touch evident throughout this dark and zany human comedy and his inspired play on exactly what may be lost in translation – Sponer confesses everything and then realises that the woman does not understand German – suggest that Lernet-Holenia was well aware that no one is all that interested in playing by the rules; survival is what counts and that sometimes true love can win out.