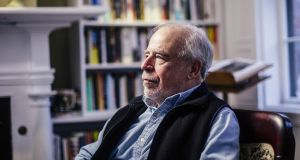 Pulitzer prize winning author Richard Russo has found himself in a curious position of late. After 30 years of writing darkly comic novels about small town America, he is suddenly considered a political writer.

“The day after the election I was asked on National Public Radio here in US. [They] seemed to think because I’d been writing about hardworking white blue-collar people all my life, that I would have some sort of special insight into why this was happening.” He is bemused at the notion. “I’ve never felt that I’ve ever been looked at a particularly political writer. I think all great writing is political writing if you tell the truth.”

Russo grew up in Gloversville, a small town in upstate New York that has influenced almost every novel he has ever written. “They’re all [set in] versions of the same town . . . I’ve told so many glorious lies about the place and I’ve made them so real in my own mind that I no longer have the ability to distinguish what’s truth and what’s fiction.”

His most recent novel, published last year, is Everybody’s Fool, a sequel to the successful 1993 novel, Nobody’s Fool, set in a working-class town called North Bath.

“My books have dealt with these people who have been marginalised from the mainstream of American society, who have been kind of betrayed in a way. Both of my parents thought that after the second World War, America was going to be a different kind of place.

“The GI Joe thing certainly helped people to become first generation college graduates like I was. But they had won a war and suddenly it was like they expected to be welcomed into the country club. It seemed a big shock to them that opportunities were going to decrease.”

Russo’s return to the town of North Bath in his new novel had a lot to do with his father, on whom Nobody’s Fool’s lovable central character Sully was based.

“I didn’t get enough of him in real life. My parents split up when I was young. I only got to know him when I was old enough to drink with him. It wasn’t that long after that that he became ill.

“He was an enormously entertaining man and when I found myself telling stories about him, it’s been like having his company back again, the way he careened around the world the way Sully does, never stopping to take stock. My books take me four or five years to write, so it was like having my father back again for four or five years.”

While his father was the charming star of Russo’s fiction, it was his mother Jean who raised him. “Her dream for me was that I would become educated and live in some finer place and put this town behind me. She felt like in sweat and tears she had paid for my passport to the kind of place that she wanted to live. The idea that I would return there book after book, I don’t think it ever made sense to her.”

Nobody’s Fool was made into a successful film in 1995 with a formidable cast: Paul Newman (nominated for an Oscar) as Sully, Jessica Tandy as Ms Beryl, Bruce Willis, Melanie Griffith and Philip Seymour Hoffman. So when Russo sat down to write the sequel, did he have all those actors in his mind’s eye?

“It was really Newman’s performance of Sully that made people so excited for a new book to come out. Some of them remember the book, but probably many more remember his performance.”

Philip Seymour Hoffman’s character in the movie has a much larger role in the new book. “I’d written probably 250 pages of Everybody’s Fool before we found out that Phillip had died, so I was very much thinking about the possibility of it being a vehicle for him.”

The absence of old friends was sadly fitting. “The book is nostalgic. It’s about memory. Writing this book after 23 years allowed me to indulge in conversations with people that are still in the back of my mind.”

Death certainly casts a shadow over the novel, albeit with Russo’s comic touch. One woman falls down the stairs to her doom “like a slinky”, coffins in the local graveyard bubble to the surface, there’s even a spot of grave-robbing.

“I don’t think of myself of being terribly afraid of death. Life has been too good to me. But that said, I am 67 years old which means that I am an awful lot closer to it than I was back when I wrote Nobody’s Fool, and we do whistle when we go past graveyards, don’t we?”

Destiny is another big preoccupation of Russo’s novel. “I guess the fact that something did happen, doesn’t mean that it had to.” He mentions Kate Atkinson’s novel Life After Life, which he loves. “Many people, especially when they become successful for some reason, they like to think of themselves as in control of their lives. They think it’s because ‘I made it happen’. It’s bullshit.” He laughs.

Russo recently wrote about his mother Jean in a memoir, On Helwig Street. Why did she require a different writing approach to his father?

“They always say ‘write what you know’ and certainly I’ve done a lot of that but often the impetus behind writing is not what you know, but what you don’t know.”

His father “lived in the next town over and I would see him on the street and then go nine months without seeing him. I write more about my father in fiction because there are so many unanswered questions.”

His mother, he says, was an open book. “There wasn’t much I had to wonder about with her.” But a year after she died, “I found that she was really haunting me . . . I thought, there’s clearly something that isn’t going to let me alone until I understand it.”

He discovered it was the similarities between himself and his mother that had caused their relationship so much difficulty. “We suffered from the same anxieties. Her steep descent into mental illness in the last few years of her life, I think that I was probably fearful of the exact same thing happening. I had a lot of the same habits. It would’ve given her a certain measure of comfort to know that I understood . . . ” Here, he exhales.

How did Russo’s mother feel about her ex-husband being written about with such affection by the son who saw him so rarely as a boy? “She said, ‘you know I like him an awful lot better on the page than I did in real life’. . . she understood there was a yearning involved. Then to see her favourite actor cast as her ex-husband and become kind of iconic . . . If you’re imaginative at all, you have to see this from my mother’s perspective, ‘So this is the way it plays out: I was always there, I was the one who made all the sacrifices . . . and look who becomes the hero here?’ She had to feel at least a little bit betrayed by that.”

There are elements of the mental illness that Russo witnessed in his mother in some of the women of Everybody’s Fool. Other women are in chronically unhappy marriages, are victims of brutal domestic violence. But Russo refutes the suggestion that women don’t fare well in his novels.

“There has been an evolution in my work. My first three novels tended to be much more about rogue males on the loose. . . But I woke up one day and I looked around and realised that all the important people in my life were women. My mother, my wife to whom I’ve been married for 44 years, our daughters . . . ” Now if he heard someone say “Richard Russo just writes about males”, “the hair on the back of my neck would go up”.

Russo may have had the title of political writer foisted upon him but he hopes “my own experience in life and my writing life allows me to see both sides of the political divide”.

He talks about the blue collar white Americans who are “doing the work that allows us all to function every day, these are important people and I think many of them feel looked down upon . . . something black people and Latinos in America have understood for a long time. I think liberals in America have some soul searching to do. I have managed to become one of those elites that Trump voters despise.”

Is he surprised to find himself in that position, so far from Gloversville? “I’m dumbstruck. Every day I wake up and look in the mirror and think how the hell did this happen?”