How to get away with murder, 19th-century style 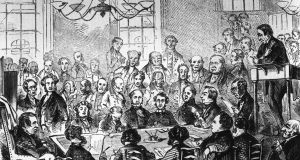 A coroner, left, police and legal staff at a murder inquest in Staffordshire in 1856. Photograph: by Hulton Archive/Getty Images

As a writer of historical crime fiction, a pleasant and productive way to spend an evening is to peruse the grisly coroner reports of 19th-century newspapers, and all in the name of research.

Inspiration can be found in the language, the mysteries, the characters. This was especially true for my new novel, The Coroner’s Daughter, all about a young lady sleuth in 1816 Dublin called Abigail Lawless.

Each inquest was its own mini-drama – the description of the victim, particulars of the crime, the testimony of witnesses, often people from the poorest backgrounds whose voices would otherwise have gone unrecorded. But while reading the reports, I was struck by the strange reluctance of coroners to declare verdicts of “wilful murder”, even in the most suspicious circumstances.

Examples of successful prosecutions based on early forensic science are rare, but they can be found

Take the death of Mrs Montgomery in 1810, a gentlewoman in the town of Eyrecourt, Co Galway. She was heavily pregnant when she received a kick to the stomach during an argument with her husband.

The altercation was witnessed by their child, and Mr Montgomery admitted to the assault, but since it happened on the morning before the night the lady died, he felt that it was inconsequential.

An inquest was held, and an incredulous reporter from the Freeman’s Journal wrote, “The jury, after having deliberated the entire of that day, returned the silly and unmeaning verdict of ‘Sudden Death.’!!” The exclamation marks were his own.

In 1827, the same paper noted the mysterious discovery of a corpse in the locked basement of a publican.

Again the emphasis is the writer’s: “The City Coroner was made acquainted with the circumstances, but, with the usual discrimination by which the Coroners of this country are distinguished, he did not consider it a case that required the holding of an inquest.”

It highlights the fact that in 19th-century Britain and Ireland cases of homicide were under-reported and misidentified. This was partly due to cost. Magistrates had to pay for inquests from the purse of their county or borough, and often withheld the coroner’s fee if they felt a hearing was unnecessary.

However, it was also true that coroners themselves lacked the medical or forensic skill to decipher marks of violence or foul play.

Until 1926, the only qualification needed for the office was possession of property. Lawyers and members of the gentry were most likely to be elected, which meant that the significance of medical testimony was routinely overlooked.

Forensic techniques were available to investigators; they were just not routinely employed

In 1803, a London mother pleaded at inquest that she had mistakenly given her three-month-old baby a whole phial of laudanum instead of a dose of buckthorn syrup.

Mary Emmerichs wrote, “The coroner did not ask if the bottles were identical, did not ask her if she could read, nor did he ask why she would have given such a young baby an entire vial of syrup of buckthorn – a violent purgative – in the first place.” The jury’s verdict was “accidentally poisoned”.

Forensic techniques were available to investigators; they were just not routinely employed. In 1816, the year that The Coroner’s Daughter is set, George Male MD published An Epitome of Forensic Medicine, a clear guide outlining the procedures for inspecting a body, the marks associated with violent deaths, the scientific tests to establish poisons, and so on.

In his preface, Male said he had been induced to publish by an “indignation which had been excited by the perusal of the medical evidence adduced in some recent trials”. He espoused admirably enlightened principles. “A medical man,” he wrote, “should found his evidence solely on demonstrative proof; for his declaration, whether founded on experiment or not, is assumed by the jury as fact, merely on his authority as a professional man.”

Examples of successful prosecutions based on early forensic science are rare, but they can be found. The most famous is that of Edward Culshaw, a Lancashire man shot through the head by a burglar in 1794. During the autopsy, the ball from the pistol was recovered from the skull, but also the remains of a scrap of paper – the wadding used in the muzzle. Carefully unfolded, it was found to be a strip torn from a song sheet.

Meanwhile, police received a tipoff that identified 18-year-old John Toms as a suspect. Toms was arrested, searched, and a ripped song sheet was discovered in his pocket. The fragment from Culshaw’s head matched perfectly, and Toms was later tried and hanged. It was the first ever murder to be solved by forensic ballistics.

A story that struck me particularly was that of a young nursemaid accused of killing her newborn in the home of her employer, Mr Nesham. The child was discovered with various knife wounds on his body, but the maid insisted that he had been stillborn, that she had inflicted the cuts in a fit of grief and guilt.

A medical examiner tested this claim by submerging the baby’s lungs in water. He found them to be buoyant, which meant, he said, that the child had drawn breath before he died. The jury returned a verdict of “wilful murder”.

A poignant discovery was made afterwards. The Dublin Medical Press reported: “A fellow-servant, in seeking out a change of linen for the prisoner, has found several articles of baby-linen among her clothes, with also a quantity of new flannel and calico, evidently intended for the expected event.”

It begged the question, why had the girl’s intentions towards her child changed so drastically? The details of this case inspired the opening chapter of The Coroner’s Daughter.

There was one more entry in a forensic handbook that caught my notice. A simple case of murder by drowning in the north of England, but the unusual element was that the coroner was a surgeon, and he had conducted his own post-mortem examination.

This was just what I wanted for my fictional Dublin coroner, Mr Lawless: a man skilled enough to perform his own autopsies and eager to apply the rationalist techniques of Male’s Epitome.

Most importantly, it gave his headstrong and resourceful daughter Abigail access to a library of scientific journals, the tools of her father’s grim profession, and a ready supply of cases and cadavers.

Her forensic adventures have only just begun.

The Coroner’s Daughter by Andrew Hughes is published by Doubleday Ireland, £13.99

Juno Temple: ‘Real eroticism is about how somebody’s sweat tastes’
4