How to get ahead in self-publishing: No 1 – you need a lot of hats

Armagh author Byddi Lee on the highs and lows of self-publishing, and on how emigrating to California inspired her to write about home 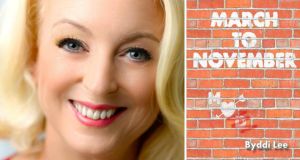 Byddi Lee: “When you self-publish, you do everything that a publishing house does – by yourself. I tapped into an artistic vein I didn’t know I had to design a company logo. It was the first of many hats – the book designer hat, the web designer hat, the blogger hat, the distributor hat, the accountant hat. The biggest, most uncomfortable hat is the marketing hat”

Will I have to emigrate again to write my next book? Sounds drastic, but that’s what made me knuckle down and write March to November. In 2008 my husband was offered a job in San Jose, California. From the perspective of rainy old Belfast, it was an opportunity too good to miss. I would be leaving a job I loved, teaching science in a school I loved, but when the man I loved suggested I focus on writing, I decided to go for it.

I knew nobody, had no job and had plenty of time to write. What did I enjoy writing about most? Ireland. As I wrote in sunny California, rainy old Belfast revealed her charms, and I developed a newfound appreciation for my home country.

Having a book set in Belfast critiqued by Americans held its own challenges. They found it difficult to get to grips with my “Irishisms” and thought craic was an illicit drug we used in Ireland. I had to explain what a “hot press” was. They enjoyed the swearing in the dialogue, questioned the amount of tea the characters drank, and by the third time I’d used a bar as a backdrop to a scene, they thought my characters were alcoholics.

Patience has never been my strong point. After a year of sending the manuscript out to agents and publishers and receiving rejections, a rite of passage to most writers, I decided to self-publish with the intention of selling the book in both the US and Ireland.

When you self-publish, you do everything that a publishing house does – by yourself. Because I was in San Jose, I needed to create my own publishing company with a registered name – Seanchai Books. A nice Irish name, until I realised that most people were mispronouncing it. Undeterred, I tapped into an artistic vein I didn’t know I had to design a company logo. It was the first of many hats – the book designer hat, the web designer hat, the blogger hat, the distributor hat, the accountant hat.

The biggest, most uncomfortable hat is the marketing hat. When March to November first came out, I took a box of books to 12 independent bookstores in San Francisco. I pushed the Irish angle while mentioning that I was now a local author. Three bookstores took a total of nine books between them on consignment. One agreed to an author event on St Patrick’s Day. My biggest accomplishment that day – finding 12 parking spaces in San Francisco in eight hours.

The next day I let my fingers do the walking, and I phoned another dozen shops in a 60-mile radius from my home. Six more bookstores took books on consignment and two more agreed to author events in March.

In three months, no consignment books have sold. Most of my sales are through Amazon, Kindle, and by direct sale through me or one of my operatives – for “operatives” read “family”. My sister is my best bookseller. She carries a book with her all the time, selling to the other mums on the school run. Other “operatives” sell books where and when they can – a newsagents/ice-cream shop, an electric store, a hairdressing salon, and even from their desks at work. Thank goodness for large Irish families.

I’ve tried to get the book reviewed. An Irish book review blogger gave me a lovely review for no charge, but other than that, it’s been a frustrating process and can cost a lot of money. Self-publishers are mostly ignored in this arena, but I haven’t given up on that yet. I’ve also paid to have the book included on mailing lists, Twitter blasts, advertised on social media sites and search engines – so far I haven’t seen a huge increase in sales.

Events are a fun way to promote the book, unless you are the shy, retiring type. Then it’s hell, I’m told, and usually in a whispered voice. A signing event in a bookstore gives you the much-needed kudos that is sorely lacking in self-publishing. The Belfast bookstore loved the local angle, while the US bookstores loved the Irish angle, loved learning about Ireland and many Americans have regaled me with stories of the best vacation they ever had – in Ireland. Others have said they loved the exotic location for the book. Belfast exotic? It probably is, if you’re brought up in the desert.

Book parties introduced me to a whole new demographic. I have some friends, American and Irish, in the San Francisco Bay Area, who held amazing launch parties. In Dublin, an “operative” there has organised a book party for my trip to Ireland. I also asked book clubs to read March to November, and followed up with a visit or a Skype call.

And then I thought a little outside the box. An Irish breakfast in a San Jose bar, just like the one described in March to November, for a Saturday morning signing event. Next month I’m having a reading and book signing at the Irish Immigration Pastoral Center Active Retirement Club Luncheon, in San Francisco. The Lord Mayor of Belfast agreed to meet me because the book is set in Belfast. The Lord Mayor of Armagh organised a big reception for the book. Armagh Library also agreed to do a signing.

Such events were unimaginable before I started on this journey of self-publishing. The support you get from people along the way is also something that takes you by surprise. From the people of Armagh, my home town, this has been especially true.

The next step is radio and television chat shows on both sides of the Atlantic – one podcast interview so far and hopefully more to come. As a self-published author, I discovered that moving to California gave me the opportunity to employ a bi-location approach to marketing. Maybe emigrating again would give me more time to write and more marketing opportunities, but eventually, all roads lead home to Ireland and the county of Armagh.