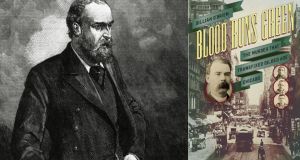 126 years ago this month, a naked corpse was pulled from a sewer in a quiet suburb of Chicago. The dead man had been brutally murdered with an icepick, and his death – and the trial that followed it – captivated Chicago society, dominated the front pages of newspapers from London to Australia, and sent shockwaves right around the world.

The victim’s name was Dr Patrick Henry Cronin. Cronin was an Irishman born in Buttevant, Co Cork. He was well-known in Chicago, where he ran two medical practices, sang in Holy Name Cathedral, and was a member of several charitable and fraternal societies. He was also a member of Clan na Gael.

Clan na Gael was a secret revolutionary society dedicated to freeing Ireland from British control by force. An offshoot of the Fenian movement, it proved enormously popular among Irishmen and Irish Americans in the United States, and by the late 1880s its membership had swelled to 40,000. The Clan excelled at fundraising for the Irish cause, but by the early 1880s, under the leadership of Alexander Sullivan, it had lost patience with its sister organization at “home”, the Irish Republican Brotherhood, and taken matters into its own hands. Sullivan launched the “Dynamite War”, a campaign in which young Irish Americans sailed to the UK and planted bombs in key strategic locations, including the Tower of London, Houses of Parliament and London Bridge.

Cronin opposed the campaign, and not without reason: it was a disaster. Most of the bombs failed to detonate, and those that did succeeded mostly in killing the men who carried them, while those who survived were almost all arrested by the British police. Surprisingly, despite these failures, no one in the Clan suspected the presence of a spy.

The failure of the Dynamite War set Sullivan and Cronin at odds, and this personal feud, which simmered within Clan ranks for years, burst into the open in 1888, when Cronin publicly accused Sullivan of embezzling $100,000 of Clan funds for personal gain. Few members believed this allegation, but nonetheless an internal trial was established in New York to investigate Cronin’s claim. After five months of heated argument, Sullivan was cleared, and while Cronin refused to acknowledge the decision and continued to allege that Sullivan was corrupt and a “professional patriot” chiefly concerned with filling his own pockets, Clan members returned to their homes. One clansman, however, did not.

Major Henri le Caron, a wiry, cigar-smoking Frenchman, was a senior member of the Clan and a Sullivan supporter who had argued vociferously for Cronin’s expulsion. But in the wake of the trial, le Caron did not return to Chicago. Instead, he boarded a ship bound for Europe and soon afterwards appeared in London, where a very different trial was taking place.

In 1887, Charles Stewart Parnell, the leader of the Irish Parliamentary Party, and the leading constitutional nationalist in Ireland, had been the subject of a series of controversial articles, published by The Times of London, entitled “Parnellism and Crime”. These articles implicated Parnell in the Phoenix Park murders carried out in Dublin in 1882, and accused him of close links with the Fenians and with Clan na Gael. Parnell denied the charges and a parliamentary commission was established to investigate the newspaper’s claims. The proceedings ran from September 1888 to November 1889 and attracted enormous attention. The novelist Henry James – who sat in the packed public gallery alongside other fascinated onlookers, including Oscar Wilde – wrote of the “thrilling, throbbing Parnell trial”, where “if one had been once and tasted blood, one was quite hungry to go again, and wanted to give everything up and live there”.

Much of the commission focused on establishing whether Parnell had links with extreme republicanism in the United States and on the morning of February 5th, 1889, Henri le Caron took the stand in Probate Court One at the Royal Courts of Justice. Le Caron was “short and slightish in build; erect like a soldier - imperturbably cool; he has a lofty forehead, and smallish alert eyes… [and] one of the boniest faces … like a death’s head with a tight skin of yellow parchment”.

Astonishingly, he had come to give evidence against Parnell, and he began his testimony with a startling announcement: he was not a Frenchman dedicated to the cause of Irish freedom but an Englishman named Thomas Beach, from Colchester in Essex, and for 25 years he had been a spy for the British government.

As a young man Beach had lived in Paris. When the American civil war began he joined a number of American friends and sailed to the United States in search of adventure (changing his name to le Caron on the way). In August 1861 he enlisted in the Union Army and fought alongside many Irishmen, including Gen John O’Neill. As a result of his friendship with O’Neill, le Caron joined the Fenians, claiming that his mother was Irish. He became a spy in the late 1860s and for a quarter of a century he worked closely with Robert Anderson, one of the Scotland Yard’s first spymasters. It was le Caron’s information that had formed the basis of several of the articles in the Times and his reports that had been partly responsible for the capture of many of the men sent to London to carry out the “Dynamite War”.

Within the Clan few, with the exception of Dr Cronin, had suspected le Caron. He was close to many senior Clansmen and “out-Heroded Herod in his zeal for the cause of Irish liberation”, Giving evidence, le Caron denied that he was either an informer or a traitor, rather he saw himself as “a military spy, serving among the enemies of my country” whose testimony would do “a great public good”. He had met Parnell a number of times, both in the United States and London, and was adamant that Parnell knew of Clan na Gael’s plan to use violence to achieve Irish freedom.

Le Caron’s testimony caused immense damage to the Clan in the United States. Cronin and his allies (including senior Clan figures John Devoy and Luke Dillon) were quick to point out that le Caron had been close to Sullivan while, for his part, Sullivan circulated stories emanating from London which claimed that le Caron had named four other Clansmen who were British spies. This list, he alleged, had been seen by Sir John Russell, counsel for Parnell, and by Michael Davitt who had taken Sullivan’s side in the Clan dispute, but there is no evidence that such a list ever existed. Nevertheless, the allegation took hold, and rumours began to circulate that Cronin was one of the spies named.

Whether true or false (and it was unlikely to be true, since no sensible spy would go out of his way to alienate himself from the head of the organisation he was infiltrating), this was a disaster for Cronin, as those suspected of spying in Irish republican circles tended not to survive for very long. Following the Phoenix Park murders, James Carey famously turned informer on his Invincible colleagues in order to save himself from the hangman’s noose, but he could not escape assassination as he fled to South Africa.

Many Clan members in America were quick to believe that le Caron was not the only spy in their midst. After all, as one argued, “the English Government would not have taken le Caron from America if there were not people to take his place here”, and it was not long before the whispers about Cronin in certain circles became firm statements of “fact”. Cronin was a spy – le Caron had admitted as much – and Davitt had seen the list. What further proof was needed? Isolated in Chicago, far from his most able defenders (Devoy and Dillon were based in New York), Cronin’s days were numbered, and by the spring of 1889 he had become convinced that his life was in danger. Nevertheless, Cronin stayed in Chicago, and on the night of May 4th, when a horse and buggy pulled up outside his house and a man leapt out, begging Cronin to come to the aid of a man who had been badly injured at an isolated ice house several miles away, the doctor should have known that his time as a scourge of corruption had come to an end.

Ironically, though Parnell was acquitted of all charges later that year, there was indeed a link between Parnellism and crime, since his trial led directly to Cronin’s murder; a murder that deepened the split in Clan na Gael, and devastated American support for Irish nationalism for years to come.