How Ireland lost its faith – but not completely

Love’s Betrayal review: Peter Mulholland is at his best in dealing with new religious movements 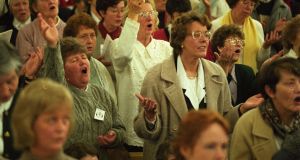 The photograph appeared in The Irish Times on the 18 November 1996 page 4. The caption read: Delegates singing at the Silver Jubilee Charismatic Renewal Conference at the RDS, at the weekend. Photograph: Paddy Whelan

On August 5th 1975 an Irish Times reader wrote to me as this newspaper’s Religious Affairs Correspondent seeking advice on how he might respond to “a young relative, who was an RC but has joined a sect started in the USA”.

The anxious reader had forgotten the sect’s name but remembered that they published “a bi-monthly named Plain Truth and have an institution with a name like Ambassador College in some part of England.” Specifically, he wondered if I was “aware of any critical comments on this sect which may have been published as, say a booklet, leaflet or periodical.”

1 Scientists uncover biological signatures of the worst Covid-19 cases
2 Two men face fraud charges over £1.2bn sale of Nama’s Northern Ireland loan book
3 How a ship abandoned by its owner brought deadly cargo to Beirut
4 When I think it won’t hurt too much, I imagine the children I will not have
5 Covid-19 may spread more easily in schools than thought, US report warns
6 Kathleen Swaine obituary: The ‘coolest, most beautiful cat in town’
7 Dublin City Council begins action against Shelbourne Hotel for removing statues
8 Coronavirus: Community transmission picking up pace as only eight counties see no increase in cases
9 AIB defends ‘incredibly’ high €1.2bn loans charge as 2008 haunts
10 ‘I wandered around Dublin wondering: Is this what they call a capital city?’
11 No time limits and no pre-booking: what the unpublished pub reopening guidelines reveal
12 'There is no way I would go' - Irishman in Malta cancels trip home as two weddings put off
13 Gardaí surrender 13 people to Polish police
14 Simon Coveney: Risk of nuclear catastrophe is unacceptably high
15 Newton Emerson: Stormont was not the centre of John Hume’s vision
16 Teenage boy dies at Powerscourt Waterfall in Co Wicklow
17 TikTok to invest $500m in data centre and create ‘hundreds of jobs’
18 Covid-19 has distracted us from the looming threat of Brexit
19 Wifi problems? Quick tips to get your home internet out of the slow lane
20 Fresh investigation into the murder of Michaela McAreavey in Mauritius
21 Heroin worth €3 million seized in Dublin, two men questioned
22 Students to wear face coverings in lectures where two metre distance not possible
23 UK offers a model for how pubs could reopen
24 O’Rahilly house at risk after being damaged by vandalism
25 ‘Coming home to Ireland felt like a gamble. I felt safe in Korea’
26 Donald Trump’s problem is that he is not authoritarian enough
27 Joels restaurateurs’ US-inspired rooftop home for €950k
28 Italy threatens Ryanair flight ban for alleged Covid-19 violations
29 German investor pays €60m for Dublin 2 office block
30 Family News, a short story by Naoise Dolan
31 Are days numbered for Bank of Ireland’s ‘subscale’ Northern Ireland unit?
32 Andy Farrell raring to rekindle Ireland’s Six Nations title tilt
33 LeBron James: NBA won’t miss Donald Trump as a viewer
34 Coronavirus: Melbourne enters strict lockdown amid second wave
35 John Hume laid to rest by family and friends in town he loved and served so well
36 Bryson DeChambeau trainer insists muscle gain is not down to steroids
37 Garda transformed domestic violence response amid lockdown surge - report
38 Alexis Sánchez joins Inter to save Man United €46.5m in wages
39 Legal definition of media must include social media, says expert
40 Ford Kuga: Impressive plug-in hybrid SUV underlines motor giant’s renaissance
Real news has value SUBSCRIBE