Publisher Harper Collins now has a north American print run for book of over 3.3m

Large crowds gathered overnight as a small book store in Monroeville, Alabama, hometown of author Harper Lee, hosted a midnight release party for her novel “Go Set a Watchman”, the follow-up to her Pulitzer Prize-winning “To Kill a Mockingbird" 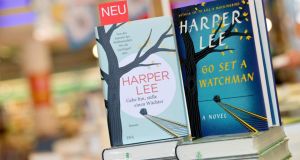 “Watchman,” written in the 1950s, was a first draft of “Mockingbird”. Photograph: EPA

Harper Lee’s unexpected new novel “Go Set A Watchman” has become the fastest selling book in the history of publisher HarperCollins, with more than 1.1 million copies sold in north America in the first week, the company said on Monday.

The novel was released on July 14th, 55 years after the author’s only other published work, “To Kill a Mockingbird,” a classic story of racial injustice in the American South.

“Watchman,” written in the 1950s, was a first draft of “Mockingbird” with many of the same characters. It made headlines with its depiction of noble lawyer Atticus Finch as a racist and bigot, a stark contrast to the idealistic, younger Finch of “Mockingbird” who put his principles on the line to defend a black man wrongly accused of raping a white woman.

HarperCollins, a unit of News Corp, said it had ordered reprints several times and now has a north American print run for the book of more than 3.3 million.

It did not give sales figures or print runs for the rest of the world.

“First week sales of ‘Go Set a Watchman’ have far exceeded our expectations,” said Brian Murray, president and chief executive of HarperCollins Publishers. “We are thrilled to see readers responding to this historic new work from an iconic author like Harper Lee.”

Lee, now 89, withdrew from public life shortly after the success of “Mockingbird” and the 1962 Oscar-winning film version starring Gregory Peck as Atticus Finch.

Dancing With The Stars backstage: ‘I’d love to see Danny Healy Rae out there’
Real news has value SUBSCRIBE