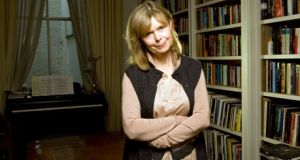 Annalena McAfee: new novel “treads a line between light-hearted satire and a discussion on notions of home and belonging”

“I pick the pockets of the English tyrants who have robbed us of our birthright, take the best of their verse, with all its unique advantages, and by a process that is part linguistic, part alchemical, I reimagine it, offer it to my people and make it Scotland’s own.”

So declares Annalena McAfee’s imaginary poet Grigor McWatt, the “bard of Fascaray”, an imagined island. McWatt is an amalgam of various Scottish writers. Like George Mackay Brown, he celebrates island life; like Hugh MacDiarmid, he writes in Lallans (or Scots) and is a passionate Scottish nationalist; and like Gavin Maxwell, he is a naturalist and keeps otters.

McWatt is “thrawn” or awkward, “a grizzled, kilted figure with fierce blue eyes under a lofty brow”. He rails against A J Cronin for his “abominably lightweight and false image of Scotland” and cites Anglophobia as a hobby.

McWatt seeks acclaim for his poetry, but is primarily famed for his song Hame Tae Fascaray, which we are told has been recorded by the Wolfe Tones, Gerry Rafferty, the Proclaimers, Simple Minds and even Dolly Parton and Bob Dylan. But McWatt is a mystery of a man: there are no photos of him before the age of 30, nobody knows his origins.

Hame is a metatextual monster, weighing in at nearly 600 pages. It’s a book which contains books. There is the primary narrative of Mhairi MacPhail, a Canadian literary researcher of Scottish descent, who has been commissioned to write McWatt’s biography and to establish a local museum celebrating his work. While she feels alienated (“I don’t belong here. I’ve always been a fraud. I don’t belong anywhere”), her daughter Agnes embraces island life, its gossip and rituals.

Then there’s McWatt’s story, which is told through extracts from MacPhail’s biography, A Granite Ballad: The Reimagining of Grigor McWatt, and through the poet’s letters to lover Lilias Hogg, “the Flooer o Rose Street and Muse of Menzies”. Lilias is based on George Mackay Brown’s lover Stella Cartwright.

On top of all this, there are lots of extracts from McWatt’s The Fascaray Compendium, a massive work that explores the island’s landscapes, wildlife, history and folklore: “tales of widows with second sight who foretold storms and predicted death, witches who blighted crops and thwarted romances, water kelpies who spirited away children”.

The compendium is replete with fascinating inventories of Scots terms; one lists words describing “uproar, fight or controversy”, such as “gurryshang” and “hubbleshaw”. If McAfee’s McWatt remains a chimeric character, her creation of an entire body of literature for McWatt is an impressive act of imagination.

No less a feat of imagination is McAfee’s Fascaray, essentially a “Scotland in Miniature”, a “bonsai Scotland, a diminutive Dalriada”. We are told that Cromwell, Bonnie Prince Charlie, Charles Rennie Mackintosh and Dorothy Wordsworth have all visited the island.

There are imagined historical manuscripts, including The Fascaringa Saga, an “inventory of lust, greed, casual brutality, sorcery and power struggles amongst Viking gods at vengeful play”. The island has a Catholic-Protestant sectarian divide, with the first mixed marriage taking place as late as 1957. There are echoes of the Findhorn Foundation in the Balnasaig Centre, “offering bed, board and cosmic enlightenment”.

Land is a central theme. There are English lairds who treat the islanders with contempt and endless struggles over land, from the Clearances to the arrival of the Trump-like bullying billionaire Archie Tupper, who tries to build a golf course on Fascaray.

McWatt denounces one laird in blood-and-soil nationalist terms: “Wha loues the laun, awns the laun, an the laun awns him . . . Montfichett disnae loue the laun. He laithes it – an aw the fowk who bide there.”

Hame treads a line between light-hearted satire and a discussion on notions of home and belonging. Thus McPhail asks herself “which word or phrase belonged at home and which in the wider world”. Her quest to “unlock a hoard of truth-telling treasures” eventually reveals the lie at the heart of McWatt’s life.

Hame is a big, bold novel: it starts shakily, and it takes a while for McAfee’s story to get into its stride, but once it does, the result is a hugely entertaining, roller-coaster of a ride through poetry and language.