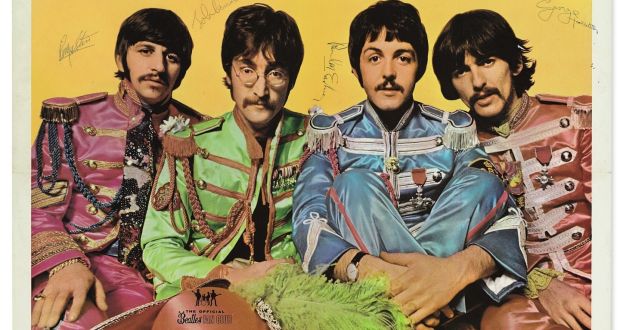 Released to coincide with the 50th anniversary of “Sgt. Pepper’s Lonely Hearts Club Band”, the essays in this collection are ordered chronologically, from 1963’s “She Loves You” to 1970’s “Two Of Us”

In Ulysses, when the character Haines hears that Stephen Dedalus has concocted an elaborate theory about Hamlet, he quips that Shakespeare is “the happy hunting ground of all minds that have lost their balance”. The same might be said of the Bard’s 20th-century artistic interlopers The Beatles. At one end of the spectrum there’s Ian MacDonald, encyclopaedically charting the circumstances behind every Beatles song; at the other end, Mark David Chapman, obsessive fan turned assassin (and I won’t even start on The Beatles Never Existed, surely the web’s weirdest conspiracy site).

More placidly in the centre are the rest of us, at whom this collection is aimed. Released to coincide with the 50th anniversary of Sgt. Pepper’s Lonely Hearts Club Band, In Their Lives presents essays by 28 writers and songwriters on their favourite Beatles song. The essays are ordered chronologically, from 1963’s She Loves You to 1970’s Two Of Us. Their tone ranges from David Duchovny’s whimsical four pages on Dear Prudence (“I’m gonna do this from memory”) to Nicholas Dawidoff’s earnest 20 pages on A Day in the Life (“Who ever loved pop music who loved not at first sight?”). As well as giving a gradual overview of the Fab Four’s career, the essays give a cumulative insight on their enduring popularity.

The most recurring theme in In Their Lives is the role of The Beatles in family life and as an intergenerational glue. Thomas Beller frames Lucy in the Sky with Diamonds in relation to his neighbours’ divorce and his father’s cancer. Elissa Schappell discusses how singing Octopus’s Garden on childhood car journeys spirited her into the realm of fantasy. Francine Prose’s debate with her granddaughter on the relative merits of Here Comes the Sun bring her back to when she first heard the song as a disconsolate dropout in India in 1969. The Beatles are as much a part of Western life as wearing socks and shoes, so it’s fitting that most of the contributors talk about The Beatles’s songs in this intimate way. Like Shakespeare, The Beatles are myriad-minded.

Some essays are intriguingly singular. Joseph O’Neill gives a bizarre, deadpan analysis of McCartney’s ditty Good Day Sunshine (“The lyrics operate in what grammarians call the irrealis moods . . . We find ourselves, we realise, in the realm of courtly love”). Maria Popova, founder of the popular website Brain Pickings, casts a Rilkean eye on how the ostensibly silly Yellow Submarine developed a deep resonance in her family life (“The story of how that seemingly random song had implanted itself in my father’s mind is the archetypal story of how popular music, and perhaps all popular art, is metabolised in the body of culture.”). Jane Smiley notes that “the way that the simplicity of I Want to Hold Your Hand grew into the complexity of Sgt. Pepper echoed and represented to me the very sensation of maturing, of taking in the mysterious and making it your own, or, indeed, yourself”. And Linguist Ben Zimmer persuasively champions the nonsensical lyrics of I Am the Walrus, situating Lennon’s crabalocker fishwife and semolina pilchard in the lineage of Lear, Carroll and Finnegans Wake.

There are plenty of facts and trivia. We learn in detail from Jon Pareles about the musique concrete-inspired sampling techniques used in Tomorrow Never Knows, which anticipate hip-hop and house music. Rebecca Mead tells us about the real-life Eleanor Rigby, buried coincidentally in the graveyard where McCartney and Lennon first met (McCartney says he had no knowledge of this).

Of course, no self-respecting Beatles book is complete without some offbeat titbits. Touré breaks from his analysis of The Ballad of John and Yoko to inform us about Lennon’s purchase of a gorilla costume (“I thought I might need a gorilla suit. I’ve only worn it twice”). And who knew, as Bill Flanagan tells us, that pre-break-up the Fab Four met with Stanley Kubrick to propose adapting and starring in The Lord of The Rings?

In Their Lives isn’t without problems. Editor Andrew Blauner’s selections can feel parochial: most contributors are either New York resident or New Yorker writers, and the collection would have benefited from casting the net further. There are dips in quality: when someone asks what your favourite song is, the temptation can be over-excitedly to tumble out your thoughts in no particular order, and there are a couple of “What I did on my summer holidays” style essays here (such as Roz Chast on She Loves You). Some of the prose could have been more tightly edited (the academic Gerald Early has a longwinded effort on I’m a Loser in the context of Black America, a good topic blandly treated). And at times a hagiographic tone descends (at which times you might yearn for a companion volume entitled Hatred of The Beatles).

Given the received wisdom that pop culture is egregiously ephemeral, this book is a useful way into thinking about what The Beatles’ enduring appeal represents. On a personal level The Beatles give joy and consolation; on an interpersonal level they give social cohesion, the cultural stitching of our collective emotional fabric. “This is what popular art does at its best,” Maria Popova writes. “It provides a screen onto which vastly different people in vastly different circumstances can project the singular meaning of their lives.”

Underneath it all is the fairytale enchantment of The Beatles’ songs, reawakening us to the carefree realm of childhood.