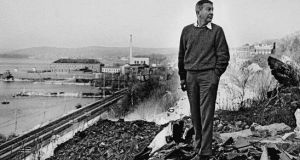 LATE, LATE in this painful exploration of one man’s life, the biographer, Blake Bailey refers to Saul Bellow. Having agreed to deliver a tribute at a service for John Cheever, Bellow remarked that Nathanael West had died on the way to F.Scott Fitzgerald’s funeral. It is a wry aside but then this book, as indeed was Cheever’s life, is sustained by zany cross references, and sad, at times, squalid anecdotes. Biography is a difficult genre, more the job for a forensic scientist than the historian. Bailey has been relentless in his task of gathering information, ably assisted by Cheever’s willing children, two of whom are writers and apparently as fascinated by the horrors of what they lived through, as strangers tend to be in the lives of the famous.

Where to start? The major difficulty facing Bailey must be the fact that Cheever was more than open with the facts of his life. His journals and diaries are there to be read, as is daughter Susan Cheever’s Home Before Dark(1984). How much do we know? How much do we need to know? No one wants to die, but one of the worst things about dying, at least for the famous, is having your sins aired after your death. The tragedy here is that John Cheever is a great writer, a master of the short story whose name gets mentioned alongside Eudora Welty, John Updike, Mavis Gallant and William Trevor. He was a realist and yet his stories in chronicling the difficulty of life often capture the daunting beauty of it. This biography didn’t make me cry, it made me sick. I feel the worse for reading it; to read it is like remaining in the company of many gleeful people engaged in an extended character assassination which had already been carried out by Cheever himself.

With all respect to Blake Bailey, a professional writer and the biographer of Richard Yates, this chatty, gossipy biography has no quality of distance. It is too familiar. It has the feel of a communal work, many people were only too eager to speak. Most of the photographs used belong to the Cheever family, including shots of his coffin being carried out of the church.

The result is that the text has an uncomfortably conversational complacency. Nor is there any sense of the US in which Cheever lived. Yet nothing personal or sexual is spared. Cheever’s marriage, his widow Mary, the mother of his children, is, at time of writing, still alive. Only a politician or a mass murderer would merit the scrutiny; their motives need to be examined. Cheever was an artist, a second son who knew his parents did not want him. His sexuality dominated his sense of self. He was short and tormented by self loathing. The problem is, this is widely known from his journals and letters.

He died at 70 in 1982 and spent most of his life as a writer. Some of the finest short stories ever written have his name on them. Yet it is difficult to find the writer lurking behind the bisexual man who, when famously asked by his daughter Susan, for a Newsweekcover story marking the publication of his masterpiece Falconer(1977), if he had had any homosexual experiences, replied: “I had had many, Susie, all tremendously gratifying, and all between the ages of nine and 11.”

The truth was of course far more extensive and widely documented, even at the time. One casual encounter with a man in Cairo left Cheever very conscious that he could have been stabbed and left to die – but Cheever knew he couldn’t control his sexual urges. Although he did succeed in giving up alcohol several years before his death, he was never able to control this side of his life.

The opening pages look to his ancestors, Yankees, possessed of a sense of history and of their own place in it. “Cheever took pride in his fine old family name, and when he wasn’t making light of the matter, he took pains to impress this on his children. ‘Remember you are a Cheever’, he’d tell his younger son.” Bailey concedes “Cheever was at once the most reticent and candid of men”. His candour took the form of a concerted horror at his own actions. Yet he could be selective, after all, as he once wrote, and Bailey notes, “I have no biography. I came from nowhere and I don’t know where I’m going.” This lack of direction may have been caused by his heavy drinking. There is also the urgent need for love that expressed itself through exhibitionist behaviour.

The earlier sections of the biography are easier to read: “He was badly in need of heroes” writes Bailey. Cheever’s childhood was destroyed by his father’s fall from social acceptability. Having lost his job, Cheever senior took to drinking and sitting on the porch, while his wife opened a gift shop. It is strange but if there is a prevailing theme that runs through this biography it is one of embarrassment. There is little genuine tragedy in it, just a great deal of embarrassment.

Bailey looks at the marriage, an extended stand-off of which his widow would admit that although Cheever was unfaithful, he invariably arrived home for meals. Both he and his wife insulted their daughter about her weight. Later Cheever would also jeer his son Federico for the same reason. The sheer savagery of the daily lives recorded here defies comprehension. There is squalor aplenty, and meanness and spite; the writers are rivals, not really friends. Although there is an image of Cheever and one of his drinking buddies, a young Raymond Carver driving quickly to an off-licence in search of supplies.

Cheever saw the emergence of John Updike, a talent he praised and resented. Their relationship was uncomfortable, the edgy politeness is obvious yet it was Updike who spoke the first eulogy and by cruel irony, the last review John Updike wrote was of this book.

While Cheever and Updike are obvious soulmates, products of similar backgrounds although Cheever lacked Updike’s tremendous application, Cheever’s friendship with Bellow was far more unlikely. Here were opposites who detected something in each other. When Cheever wrote to Bellow, looking for comfort, he got it.

“What I would like to tell you is this” wrote Bellow, “we didn’t spend much time together but there is a significant attachment between us. I suppose it’s in part because we practiced the same self-taught trade. Let me try to say it better, we put our souls to the same kind of schooling…You were engaged, as a writer should be, in transforming yourself. When I read your collected stories I was moved to see the transformation taking place on the printed page.”

There is also Cheever’s association with New Yorkerfiction editor and writer William Maxwell, whose famous sympathy was tested beyond endurance by Cheever. Maxwell simply couldn’t cope with Cheever. Few could, least of all, Cheever himself, a man who decided against leaving a dead marriage because he had just spent a vast amount of money on repairing the porch. Cheever could leave because he was lonely; his life was a battle against loneliness and the demon called John Cheever.

Bailey does not prove particularly textually astute, he is not insightful on Cheever’s work. If this biography which is not a pleasant read achieves anything it should be to draw readers to stories of genius; works such as The Swimmer, The Housebreaker of Shady Hill, Reunion, The Ocean, The Geometry of Love, Goodbye, My Brotherand so many others. The tears are in the stories, and within the pages of his short novel, Falconer, prepare to shed them.

Eileen Battersby is Literary Correspondent of The Irish Timesand author of Second Readings: From Beckett to Black Beauty published by Liberties Press, €14.99