Grace under pressure: the Famine in fiction

In some ways Paul Lynch’s 'Grace' is a typical Famine novel, which are at heart seldom about the Famine as such 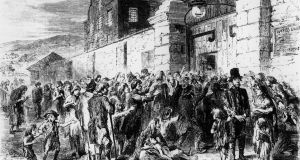 The Irish Famine: Scene at the Gate of the Workhouse, c.1846. Image: Getty Images

The title of Paul Lynch’s award-winning novel about the Famine, Grace, is not only the name of its protagonist. It obviously also refers to the spiritual condition of grace, which the Donegal teenage girl seems to achieve, against all odds, through her numerous trials and tribulations. Lynch’s novel is a coming-of-age story, and the Famine essentially figures as a rite of passage for Grace, who is forced to grow up fast in order to survive and in doing so gains spiritual independence and a new sense of identity.

Interestingly, although the novel is in several ways quite original in its depiction of modern Ireland’s bleakest years, it is far from unique in its use of the Famine as a catalyst for spiritual growth or salvation. This particular dimension features in works of Famine fiction dating back all the way to the period itself. In Margaret Percival’s deeply proselytical The Irish Dove; Or, Faults on Both Sides, published in 1849 as the crisis was still raging, the Famine becomes an instrument to evangelise the Irish peasantry and convince them to forsake what the author considers their Catholic idolatry. As such, Percival suggests, the suffering of the flesh is beneficial for the soul.

The conviction that the devastation of the Famine would actually have a salutary effect was widespread at the time. In his 1848 essay The Irish Crisis, Charles Trevelyan, the Treasury official in charge of the administration of Famine relief and a strict Evangelical, stated cheerfully that “on this, as on many other occasions, Supreme Wisdom has educed permanent good out of transient evil”.

Many later writers harnessed the Famine for similar messages of salvation. In my PhD thesis, I discuss numerous examples from the last decade of the nineteenth century and the first two decades of the twentieth. Glenanaar (1905), by the priest-novelist Patrick Sheehan, features a character who has been ostracised by her community and almost dies during the Famine. However, she is miraculously saved by her former sweetheart, who nurses her back to health and subsequently marries her. The Famine partly erases her social exclusion and she thus experiences not only physical but also spiritual redemption.

In like manner, in Máire Ní Chillín’s obscure and, frankly, rather unreadable story On the Bog Road (1917), the Famine enables the protagonist to demonstrate her bona fides as a good Irish Catholic, because it allows her to resist the lure of the Souper school: “Bad times do not matter [...]if we keep true to the faith that is in us”. The Famine tests her piety, calling on her native reserve of stoicism, and her starvation thus builds character. Seventy years later, the protagonist’s example is an inspiration to her grandchildren. They initially gripe about the effect of the ongoing Great War on their Christmas prospects, but learn from their nan’s story that they mustn’t grumble as long as they have their ancestral faith.

In this type of text, as Chris Morash suggested in 1995, the Famine becomes a “purifying crucible of faith”. Yet such faith is not exclusively religious, but can also be political. In The Next Time by Sinn Féin propagandist Louis J Walsh (1919), the crisis galvanises the nationalist sympathies of the protagonist and opens his eyes to what Walsh considers to be important political truths. If this is what the Union has led to, he asks, how can anyone possibly condone British rule?

Grace, too, uses the Famine as a vehicle for social critique and various forms of salvation. As Lynch states in a promotional video put out by his publishers, the novel is “a story of spiritual regeneration that comes out of Ireland’s darkest hour” and concludes with a sense of “secular grace”. Unlike its precursors, though, Lynch’s version of this well-worn trope is not programmatic, nor is it rooted in dogmatic Christianity. As such, it is mercifully free from the political propaganda and religious sermonising that typifies so many works of Famine fiction.

Indeed, although one of the novel’s chapters initially hints that Grace will find redemption in Christian piety, this is soon shown to be a blind alley. Rescued from being buried alive, Grace is brought to a cult-like Christian mission led by “Father”, who claims that the Famine is God’s punishment for Ireland’s sinners. Yet the cult leader’s self-proclaimed godliness merely cloaks his own prurience and his millenarian moralism is a sham.

For the most part, Grace’s worldview is derived more from her deep faith in Irish folklore than from the teachings of the Catholic Church or Father’s prophesying. Not Providence but the pooka is imagined as a primary agent of Irish misery. The novel’s cosmology, Celtic but devoid of the romanticism of the Twilight, gives the story a timeless dimension lacking in most other works of Famine fiction - notable exceptions being William Barry’s Revivalist work The Wizard’s Knot (1901), and a series of tales by Co. Mayo farmer James Berry which appeared in the Mayo News between 1910 and 1914.

In The Event and Its Terrors (2003), his magisterial anthropological study of the legacy of the crisis, Stuart McLean argues that folk culture has always been a prime locus of Famine memory. In Grace, too, the vestiges of Gaelicism are imbued with great significance, and this makes the novel an original take on the hungry forties.

In terms of style, Grace is mostly unlike nineteenth- and early twentieth-century Famine fiction, even if a lot of its imagery - walking skeletons, corpses by the roadside, bodies left to rot in abandoned cabins - will be familiar to readers of any description of the Famine. Stylistically, the novel imagines the Famine as if written by Cormac McCarthy and William Faulkner, with a dash both of Beckett’s breakdown of language and his virtuosic profanity. Though Lynch’s language is sometimes excessively ornate, more often it is hauntingly beautiful. This capacity to find poetry in desolation, though recognisably influenced by Faulkner, McCarthy, and other writers, has few antecedents in Famine fiction.

Still, if there’s one thing that scholars have learned from exploring the scores of Famine narratives that have been published since the crisis, it’s that such work is actually seldom about the Famine per se. Sure, these narratives are set during the crisis and describe it in often gruesome detail, but at heart they tend to be about other things, such as the Land War, or the Revolution, or the crumbling authority of the Ascendancy. Or sometimes they’re just some identikit love story about a virtuous Irish maiden and her beau, using the Famine to show its characters in a good light.

While the crisis is often used to stage an exploration of the Irish past, just as frequently Famine fiction explores history’s counterpoints with larger human truths. Prejudice, violence, the mendacity of power; but also family, empathy, and love in its myriad guises. The resilience of the human spirit. Lynch also employs Irish history to consider such universal issues. The tale depicts the Famine, but fundamentally, it’s not about the crisis as such. In Grace, as in so many other works about Ireland’s most tragic years, death somehow leads to awakening. And in this sense it is, ultimately, a typical Famine novel - though a graceful and rather good one.

Christopher Cusack was awarded his PhD last February. His thesis focused on Famine fiction published between 1892 and 1921. He lectures at HAN University of Applied Sciences and Radboud University in Nijmegen, the Netherlands.

Grace by Paul Lynch is the Irish Times Book Club’s June 2018 selection. Grace is published in paperback by Oneworld on June 7th. Lynch will be interviewed by Laura Slattery for a podcast at the Irish Writers Centre in Dublin’s Parnell Square on Thursday, June 21st, at 7.30pm. Throughout June, the author, fellow writers, critics and academics will explore the work in articles published in The Irish Times.