‘Go easy on me – this was my first attempt at prose, never mind a short story’

Paul McVeigh describes the strange sensation of rereading his first adult short story and recalls how it evolved into his novel ‘The Good Son’, July’s ‘Irish Times’ Book Club choice 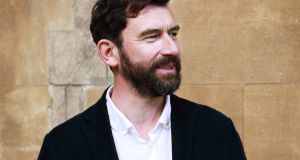 Paul McVeigh: ‘I edited a huge amount of swearing out of the story for publication here.’ Photograph: Roelof Bakker

Reading What I did on my summer holidays again was an unsettling experience. A peeking-through-your-fingers cringe you get looking at early work and the mind-boggling realisation that this was the beginning of a journey that would lead me here 17 years later. I lost this story when a hard drive got corrupted many years back; in fact, I lost the first draft of the novel at the same time. I was so devastated I took a long break from writing and had to begin the novel again, from scratch, years later.

This story being my first attempt at prose, never mind a short story, I now see the gaps and failings. I’d never even read a short story before writing one. Back then, I was writing comedy shows in London, had done a little for TV and was teaching comedy sketch writing at Hampstead Theatre. After seeing one of my shows, author P-P Hartnett got in touch, asking me to submit to a short story anthology he was editing. I hadn’t written prose since my essay What I did on my summer holidays at school – and most of that I’d invented to make me look good.

So when I sat down to have a go at writing a short story, I took the most common advice I’d heard: write what you know. I thought about the last time I’d written, and used that title as a little wink to it. I thought of a moment in my childhood, on a visit to my aunt’s, and used that as the intention.

I had reached the word limit before I’d gotten to the lane leading to my aunt’s house – this was the moment the idea this story could become a novel first occurred to me. None of the action I’d written was autobiographical, though the arena was. I edited down this chunk and added a fictionalised version of the scene I had originally intended at my aunt’s.

Most importantly, it was Mickey’s voice that came out. He’s been here ever since. Though he stays the same age and size in my head, like Bart Simpson, his personality has changed over the years. Mickey got craftier, funnier, dafter, stronger and braver with each draft of The Good Son.

The story got accepted by the editor, and was published. I went on a mini-tour of Waterstones shops in the UK and Ireland. Bizarrely, I read in Waterstones Piccadilly, with whom I would later develop an important working relationship; Brighton, where I would later live and where The Good Son become one of the City Reads; Dublin, where I will come to discuss the book with Martin Doyle as a part of the Irish Times Book Club; and Belfast, where, of course, the book is set. Never thought about that before – it’s like I’ve been reading one of those weird cult books on the power of coincidence.

Mickey is less resilient in this story than he would become for The Good Son. Still a thinker, but of a different kind. In the novel, he has progressed from “see how bad it is?” to “things are bad but I will win”. You can see in this story that although Mickey has flashes of humour, the overall tone is more sombre than in the novel and hints at darker stories underneath. (For those of you who haven’t read The Good Son, the novel turns up the volume on the funny.) Writing comedy for years made me want to write something dark, to swim in that part of me. I explored those darker stories in the first drafts of the novel and it was a very different book from the one that was published.

I left writing comedy not too long after writing this story, and by the time I was doing the major rewrites about four years ago my need to distance myself from the comedy world had gone and I was ready to embrace it again.

I edited a huge amount of swearing out of the story for publication on this website, but there’s still quite a bit. The swearing wasn’t in there to shock but to address what I saw as the omission of swearing children in books. This runs closely with the absence of working-class voices. I contend that Ireland has more working-class writers and themes than the UK.

On the streets of Belfast, in the working-class sectarian ghettoes of my day, swearing punctuated every sentence. Think of the movie portrayals of the Italian ghettoes of New York and you’re getting close. Of course, it’s related to working-class culture. The obvious reason for this would be lack of education, but it’s more complex and more powerful than that. It was a badge of honour – we are happy as we are. There was a relish in it too. Integrating swearing into everyday conversation was a literal “f**k you” to those who have, be that money or intelligence or even talent. And as for those of their community who possessed any of these passports – permission to enter the world beyond, a way out – they needed to be nifty with their tongue.

It’s not called a class war for nothing, and defection is a betrayal. Swearing, harsh words, can be a tool of peer repression, a whip to keep you in line. Perhaps a brutal environment begets a brutal language (also reflected in the harshness of our Belfast accents?) and a brutal socialisation. This is glimpsed in the story and explored in more depth in the novel. If you adapt how you speak – stop the swearing, for example, or speak softly, expand your vocabulary, use correct grammar – then you are rejecting your people, rejecting what your community stands for. You are saying the other world is better, that you aspire to “have”. If you’re in a world where excelling at harshness makes you a winner, then being soft, believing in gentleness and kindness, makes you a loser. You will be eaten up, vilified or mocked.

But it’s not all doom and gloom. Swearing can be fun. The playfulness I’ve seen in the use of the filthiest of words, especially when coming from the unlikeliest mouth, has created some of my best childhood memories. Playing with the power of the profane leads into the role of humour in harsh environments – I know Lisa McInerney is going to talk about this, and I’m looking forward to hearing what she has to say. Playing with the harshness of words can take away its power too. Jostling with your friends and family, the Northern Irish slegging can keep you humble and thicken your skin, but it can be lethal to those unable to spar. Harsher than slagging, it pushes the boundaries, testing just how much mockery and criticism a person can take before cracking, and it often only ends when someone takes the needle and turns violent or is nasty without being funny – fail to make the cruelty funny and you have lost. A sharp wit can give you a place in this kind of world when brawn, connections or the threat of violence are not at your disposal. Mickey has that. He needed it.

As I said, What I did on my summer holidays was my first time. Be retrospectively gentle with me. Or sleg away. But be warned, I’ve had decades of practice and we cut deep up North.

Go to Auschwitz, buy a trinket: Howard Jacobson on how we treat the Holocaust
2

The movie quiz: What mighty age is Olivia De Havilland?
3