George Moore, Zola and their publisher sacrificed on altar of Victorian prudery

The Irish writer played a central role in the Victorian equivalent of the Lady Chatterley trial, which cast a shadow over the literary world but helped inspire his masterpiece 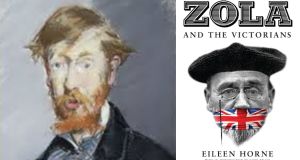 Portrait of George Moore by Manet / Metropolitan Museum of Art, New York: WB Yeats compared the unprepossessing Mayo man’s visage to “an astonished turnip” although this may have been in retaliation for the ever-provocative Moore comparing Yeats in his black cloak, walking in Coole Park, to “a huge umbrella left behind by some picnic party”

If looks alone could immortalise a writer, the Anglo-Irish author, critic, dramatist and autobiographer George Moore (1852-1933) might be a household name today. He was an idiosyncratic figure whose clothes always seemed a size too large – even friends and lovers described his “narrow chest and sloping shoulders”, and his reddish-blond hair that “looked like it was pitchforked on”. His childhood companion Oscar Wilde recalled his “pasty face and vague eyes”, while WB Yeats compared the unprepossessing Mayo man’s visage to “an astonished turnip” – although this may have been in retaliation for the ever-provocative Moore comparing Yeats in his black cloak, walking in Coole Park, to “a huge umbrella left behind by some picnic party”.

Whatever he lacked in physical favours, Moore made up for in character and talent, inspiring devotion from his friends for his wit and passion, and loyalty from his readers for his vivid storytelling. His role as a provocateur and innovator left an indelible mark on the literary culture of his time – and in no case was this more demonstrable than in the tragic story of his friend and publisher Henry Vizetelly.

An eminent journalist and editor turned publisher, Vizetelly established a small family firm in London in the early 1880s, specialising in the publication of European novels in translation as well as works by English and Irish writers. It was to him that Moore turned in 1883 when his first novel, A Modern Lover, struggled to find a home after being banned by the all-powerful circulating libraries which dominated the British cultural scene at that time; if they took against a book (which they did often, on high moral grounds) it was comparable to Amazon refusing to stock a title today.

Vizetelly & Company went on to publish Moore, including his bombastic pamphlet railing against the cultural timidity of the era and the libraries that tried to silence him. In the story of Zola and the Victorians, Moore plays an important role as a supporter to Vizetelly. Almost 30 years his senior, Moore’s editor and mentor was a paternal figure – particularly because Moore had a conflicted rapport with his own father, a strict Catholic MP who never approved of his son’s creative vocation and hoped in vain that he would pursue a military career. In return, Moore encouraged the highly successful French author Émile Zola, to sell the English rights in his novels to Vizetelly, brokering an arrangement between his friends – a generous move but one that would prove fatal.

Vizetelly and Company published mainly translations of European “modern classics” (including works from Flaubert, Maupassant, Tolstoy and Gogol) and selected works by Irish and English authors of the day. The firm embraced Zola with enthusiasm, selling numerous versions of his novels before running into serious trouble in the late 1880s. Zola’s novels and their publisher were singled out and decried in parliament and the popular press, the books likened to pornography, “fit only for swine”. Influential daily paper the Pall Mall Gazette thundered, “Why should England be flooded with foreign filth, and our youth polluted by having the most revolting and hideous descriptions of French vice thrust upon their attention?”

The Gazette’s editor, WT Stead, was a founder member of self-styled “philanthropic group” the National Vigilance Association. In tandem with a Scottish MP, Samuel Smith, Stead targeted Vizetelly and Company and determined to make an example of him in court. Ironically, they did not take issue with the books being published in the original French – it was implicit that educated people (ergo, French speakers) had the moral armour to resist the defiling effects of Zola and his ilk. The problem with publishing these works in affordable English-language editions was that the “common people”, that is, the newly literate working classes, might read and be wrongly influenced by these stories of people like them: farmers, laundresses, miners and shop girls, striving to better themselves in the face of rapid change amidst the turmoil and rampant inequality of the time.

Moore leapt to his publisher’s aid, preparing a bullish defence based on Zola’s literary merit, and pointing out that the prosecutors would have to censor Shakespeare, Byron, indeed much of the Bible and the English literary canon if they insisted on gagging the less offensive Zola. In our post-Chatterley Trial world this seems a wholly logical argument, but it had no impact on the prudish prosecutors. In 1888, Vizetelly was tried at the Old Bailey for publishing “obscene libel”, and was bound over to “keep the peace” and desist from publishing “pernicious literature”. However, his firm’s economic circumstances were so dire he had little choice but to carry on – and unsurprisingly, the public was clamouring to read the contentious books. In an effort to appease the censors, his sons hastily edited several of the novels before re-issuing them.

In 1889, Vizetelly, now nearly 70 years old and in poor health, was fined and sentenced to serve three months in the notorious Holloway Prison. The outraged Moore now attempted to secure his early release, working with Vizetelly’s sons to mobilise more than 150 leading cultural figures of the day (among them Thomas Hardy and Henry James) to sign a petition to the home secretary. Unfortunately, this effort failed, and Vizetelly emerged from gaol a broken man, dying in penury a few years later.

This case cast a long shadow over the publishing and writing community. At the time of the trial, Hardy had just completed Tess of the D’Urbervilles, and was compelled to bowdlerise himself in order to publish it, excising the rape of Tess entirely; he only dared to bring out his next novel five years on. “Hardy the Degenerate” drew many comparisons to his French peer, and the next book had a vitriolic reception, immediately being dubbed “Jude the Obscene” by his critics.

The National Vigilance Association grew in strength and influence, its agents roving throughout Britain and Ireland, confiscating and even burning books that offended their sensibilities. In the face of such prudery, even the ebullient Moore fell silent until 1894 and the publication of his masterpiece, Esther Waters. This portrait of a rebellious, young working-class woman struggling to raise her illegitimate son draws heavily on Zola in both subject and style. Although Henry Vizetelly did not live to see its publication (by one of his rivals), he was obliquely commemorated in the novel in the person of Esther’s hapless suitor William Larch, a man twice prosecuted for moral crimes on the instigation of a vigilante, and fatally broken in health and finances as a result.

Esther Waters was a great success, reprinting in 25 editions and adapted by Moore himself for the West End stage, as well as translated in several languages. It was initially banned by Moore’s old adversaries, the moralistic circulating libraries, but they were eventually forced to stock it by popular demand. This was a small but significant battle won in a war that would rage on for seven decades, until the archaic British obscenity laws were finally changed, and the trial of Lady Chatterley’s Lover ushered in a new era.

‘There’s no justice in this’: Inside the new Netflix series on Jeffrey Epstein
5