From There to Here by Ciaran Carson review: Vividly inked verse

It is impossible to do justice to breadth and depth of Carson’s work, but this is a good stab 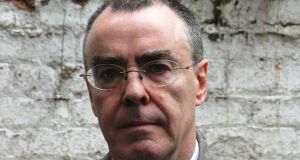 Book Title:
From There to Here: Selected Poems and Translations

Ciaran Carson’s retrospective starts with Colm Cille recited, a delightful translation from the middle Irish. Light and sturdy as a coracle, the poem spurts up from the heart of Carson’s oeuvre, “slender-beaked, my pen jets forth/a stream of beetle-coloured ink”.

“Ink” is a key word for Carson, a metaphor for his highly verbal poetry and his painterly, colour-dazzled eye. Its stain is everywhere, from its olfactory presence in the kangaroo pouch of his father’s postbag to his ink-sozzled memoir The Star Factory. Like Hamlet (the star of tremendous maze-like Belfast noir poem of that title in Belfast Confetti) Carson is father-haunted. Unlike Hamlet, the haunting is positive. Carson’s bilingual father, Liam, filled the conches of Carson’s ears with stories, song and two languages, along with a cinematic vision enhanced by tramping the Dedalus labyrinth of an ever-changing Belfast on his postman’s round. This title closely echoes the title of his father’s memoir, Seo, Siúd, agus Siúd Eile, which Carson translates as, “Here, There, and There again ... Translation seems implicit in the title, not least in the sense of moving a thing from one place to another.” Further on, Carson describes himself as his father’s “macasamhla … meaning copy or type” and “type” brings us back to ink again – one brush with Carson’s ludic poetry and you find yourself waltzing with the dictionary and enjoying it.

Translation is creation too – it is not just a matter of copying, although Carson is no stranger to that monkish task either, having hand-transcribed the entire Northern Ireland Civil Service Code Book as a young clerk. Every word has several meanings in Carson’s world, every reading comes up with something different as he simultaneously burrows down and flies over his native city, a shining example of Calvino’s lightness, quickness and multiplicity. His work embodies the dinnseanchas, which is also translation; translation of each place into a story that keeps changing.

Borges – surely another godfather to Carson – famously said that good readers are rarer than good writers but Carson is a tremendously visual reader too, a conjurer of aerial views and maps. Looking over the pages of this selection, one sees the extraordinary range of his architectonics since his first publication in 1976. From the long line, sometimes attributed to the influence of CK Williams, through sonnets, haiku-like triplets, to the short couplets that invoke William Carlos Williams, especially his rain-washed wheelbarrow in Breath when the helicopter leaves “a clear blue/space/above my head/I feel /rinsed/clean.”

There are conversations between poems and conversations with other poets – also a form of translation – the obvious homage to MacNeice in Snow or the barest hint of MacNeice when “curtains fluttered” in the The Irish for No, where Keats is explicit. Later Keats is implicit, in the poppy-induced trances of The Twelfth of Never. Sometimes Carson haunts other poets as in Cocktails – “ … when someone ordered another drink and we entered/The realm of Jabberwocks and Angels’ Wings, Widows’ Kisses, Corpse Revivers.” – when the world is indeed various, suggesting that Carson might have inspired Muldoon’s abecedarian poem, The Birth. The alphabet, of course, is another organising principle in Carson’s poetry, bringing us back to type and ink again.

Form is related to time, as in keeping time, which comes from the breath. Breath and breathing is a strong presence in many Carson poems, along with those frightening symbols of mortality, clocks, watches and bombs. Time and space converge in Ambition, written when explosions were commonplace, “And if time is a road, then you’re checked again and again/By a mobile checkpoint. One soldier holds a gun to your head/ Another soldier/Asks you questions, and another checks the information/ on the head computer.” And time is still deadly in Night Watch, written during his wife’s illness, “we are what we remember /of each other more than that/the increments by which time/ gains on us/& then retracts/into a darkness that we never /knew till now”.

The final poem is another translation of the emblematic The Blackbird of Belfast Lough, whose ghost whistles through many Carson poems, “The little bird/that whistled shrill/ from the nib of/ its yellow bill…” “Nib” refers to ink again but it is a singing nib, reminding us that Carson, like “Magister Ludi” in The Shadow, “ … is skilled in many disciplines./With a luminous gold stylus he writes a hieroglyph/ on the dark, and so initiates a constellation/from which blossom countless others.”

It is impossible to do justice to the breadth and depth of Carson’s work (which includes fabulous translations of The Táin and Inferno and volumes of wonderful prose) but this fine comprehensive volume is no ordinary selection. The rearrangement or “there to here” of his poems – which have always spoken to each other – calls out clearer and sharper than ever, an interactive treasure chest from one of our greatest living poets.

Martina Evans is a poet and novelist. Her latest book of poems Now We Can Talk Openly About Men is published by Carcanet