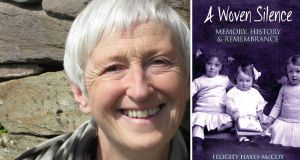 Felicity Hayes-McCoy: rhe silence surrounding the aspirations of the women who took part in the early political life of the Irish state did not come about by accident: though, as the title of my book implies, its genesis was complex

It was not as if I was unaware that Marion Stokes had been a member of Cumann na mBan. But along with that information came an unspoken sense that questions about it would not be welcomed. Marion, my grandmother’s cousin, lived to be 87 and died in 1983, so I could have had an adult relationship with her. But, as it happened, I didn’t. I left Ireland for London in the late 1970s. My mother often came to visit me and once, on a walk by the River Thames, she mentioned that though Marion had grown up in Enniscorthy and died there, she had spent time nursing in England. I remember asking why she left Ireland and my mother shaking her head and saying that she didn’t know. Marion, she said, “didn’t like to talk about the past”. I could well believe it. The Marion I knew in my childhood was not someone who would let her hair down, put her feet up and engage in girly chats. My mother said she had always been like that and I suppose that, when she told me so, I assumed it went with a lifetime of responsibility, starched aprons and hard work.

Most of my teenage years were spent locked in silent conflict with my mother about everything and anything, but I had long conversations with her as an adult. In the years after my father died, she and I took several holidays together and many of the family stories she related come back to me now coloured by the sound of waves slapping against the prow of a Rhine boat or the scent of salt and wildflowers on a high cliff on one of the Scilly Isles. I wish now that I had asked her more questions about Marion. But I doubt that I’d have got more answers.

When I was a child my favourite season was autumn. My mother’s favourite was spring. I once asked her why that was so, and she told me that she loved its sense of expectation. The memory of that conversation still touches me and leaves me faintly angry, because she was one of a generation of Irishwomen whose legitimate expectations for herself and for her children were betrayed.

In the absence of written or oral record I cannot be certain what exactly caused 20-year-old Marion Stokes to go out and fight in 1916. Her primary motivation may have been nationalist, feminist, political or purely cultural. In the absence of memory I am left with inference. But two things I do know. One is that the Proclamation of the Irish Republic issued at the outset of the 1916 Rising “claims the allegiance of every Irishman and Irishwoman” and “guarantees religious and civil liberty, equal rights and equal opportunities to all its citizens”. The second is that a statement issued afterwards by Cumann na mBan asserted that by “taking their place in the firing line and in every other way helping in the establishment of the Irish Republic” its members had “regained for the women of Ireland the rights that belong to them under the old Gaelic civilisation, where sex was no bar to citizenship, and where women were free to devote to the service of their country every talent and capacity with which they were endowed”.

That reference to “old Gaelic civilisation” is questionable: it ignores, for example, the fact that for centuries, if not millennia, native Irish society, like many others, used slaves of both sexes as units of currency. But, setting aside bad history and concentrating on political aspiration, it seems fair to assume that Marion and her companions, male and female, were prepared to sacrifice their own lives to secure a state founded on the principle of equal rights and opportunities regardless of gender. Yet I grew up in a state with a constitution that declared the proper aspiration of women to be marriage, our proper function to be child bearers, and our proper sphere the home.

That constitution, drafted for – and to a large extent by – Éamon de Valera, who had been a leader of the Rising, passed into law in 1937. So in only 25 years the aspirations of 1916 had been eroded to the extent that the rights of half of the State’s citizens were reduced. And that is the terrible part. When one section of society effectively becomes second-class citizens, the balance and health of the community as a whole are affected. Among the visible results in Ireland were levels of state-sanctioned institutional brutality which have only recently begun to emerge. Another was the fact that my mother, along with thousands of women of her generation, was told that marriage should be her highest aspiration, childrearing her only creative outlet, and that economic dependence was her civic duty. That in its turn produced levels of misogyny, emotional sterility and civic immaturity still evident in Ireland today.

Many women protested in public and in private during the drafting of de Valera’s constitution. The Irish Women Workers Union, many of whose members had been involved in the 1916 Rising, expressed outrage; a letter from the secretary to de Valera, quoting the clauses which referred to the position of women, said: “it would hardly be possible to make a more deadly encroachment upon the liberty of the individual”. But by then women no longer held significant positions of influence in Ireland. The constitution was accepted. And a combination of revisionism and isolationism in the years that followed left the majority of Ireland’s citizens ignorant of the legacy we had been denied. And as I write this now, Irish citizens are still protesting about gender inequality, homophobia and the denial of Irishwomen’s basic human rights. Yet, in theory at least, the battle for equal rights was fought and won in Ireland 100 years ago.

That anomaly, the mixed messages of the Ireland in which I grew up in the 1960s and ’70s, and the knowledge that the rights for which my grandmother’s cousin Marion was ready to die were denied to my mother’s generation and my own, all inspired A Woven Silence: Memory, History & Remembrance. The silence surrounding the aspirations of the women who took part in the early political life of the Irish state did not come about by accident: though, as the title of my book implies, its genesis was complex. As the centenary bandwagon lumbers up to the starting line, we should examine that complexity and take steps to counteract its continuing pernicious effect on contemporary Ireland.