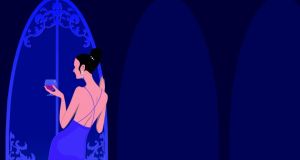 Despite riding most of the way in a hansom cab – naturally, I did not give in to Celia’s wish for one of those cheaper, modern steamcabs – I saw about as much of London through the window as I would have seen had we gone the whole way on foot, and that was quite enough, if not too much. The narrow streets, hemmed in by high, crooked buildings, were rather gloomy, and all seemed to be in the grip of a murky smog, that was relieved not quite regularly enough by misty lamplight. Rusting steamcabs chugged over the cobblestones alongside unsteady coaches and hansom cabs, with space being at such a premium that many vehicles were forced upon the footpaths, which were already thronged with hordes of men, women and children bustling up and down. Several organ-grinders plied their trade with a great screeching. Young boys and girls, their countenances smeared with dirt and smoke, weaved through the crowds, rolling hoops or playing with whips and tops.

Sinister figures stalked the alleyways; fallen women flocked in the shadows; intoxicated, boisterous brutes surged in and out of alehouses and gin mills, to stagger or brawl their way across the street. An assortment of buildings pumped an assortment of fumes into the sky from their chimneys. Silhouettes of airships and aircabs floated slowly past the lunar corona.

An unpleasant smell, some compound of oil and smoke and – dare I say it! – urine, hung over everything. Light but unrelenting rain pattered and plashed down from on high. It was all quite repulsive.

Celia, of course, attempted to persuade the cab driver to stop the cab some distance from the Royal Italian Opera, that we would walk the remainder of the way; I only barely managed to convince the driver to keep going until we had pulled up a few yards from the entrance. There we disembarked, Celia seemingly enjoying the rain, I raising a parapluie above my head to keep it off.

Luckily, my first impression of the Royal Italian Opera was not quite as horrid as that of the rest of London. It had managed to remain cleaner than most other smoke-stained buildings, and had, thus far at least, evaded the plague of cogs, wheels, pipes and excess chimneys with which many other buildings had been, “stylistically”, stricken. As with Celia’s fascination with London, I cannot comprehend how one could consider the addition of such contraptions, to what were originally quite pleasant buildings, an improvement; to me it seems as if buildings appended thusly have been rather defaced, and evokes in me no more awe than if a window had been smashed.

Celia thinks quite the opposite. She positively adores the new trend, and has appealed to Father a number of times to install some gears upon the exterior of the manor, but fortunately nothing has come of it yet.

I hurried in out of the rain, past a staunch little porter whom I thought at first to be a statue, as he and every hair on his body were standing so perfectly still.

“Shall I take your coat, madam?” he asked suddenly, and I turned again to find him almost exactly the same, except for his left eyebrow, which was raised inquiringly.

“No, thank you,” I replied, still unsure if it was he who had spoken. “I’m rather cold from the rain.”

“As you wish, madam,” he said, and only then did I become truly certain that he was a human being. He was rather a funny sort of thing, with his perfectly oiled moustache and hair; the impression that he may have been an odd, not-quite-right waxwork from Madame Tussaud’s had not entirely abated yet.

The entrance hall of the Opera, I must admit, was magnificent. A strip of lavish carpet ran down the centre of the marble floor and up the grand staircase to the double doors into the auditorium, which had simple but strangely beautiful mullions; on pedestals on either side of the staircase there stood bronze sculptures of proud little men clutching scripts to their breasts; and then hordes of actual people, the bourgeois as the French would have it, who stood in their small groups conversing and struggling to hold their wine glasses in an elegant manner with their stubby hands, or paced around with carefully measured steps, pretending to admire the statues. Celia quite adores them, and rather admires how they “make their own way in the world”. I must admit I don’t dislike them, either; but I am cautious, for I know Father’s attitudes to their sort, and would rather avoid socialising with them than provoking his wrath.

Upon my following Celia up to the top of the staircase where she tried to peek through the double doors, I did, however, notice one particular individual whom I could not readily ignore. He was a tall gentleman, dressed all in black, except for a white shirt. I suppose, thinking about it now, there was nothing particularly unusual about his dress. Everyone wears black nowadays, ever since the Prince Consort died; everyone except Celia, that is, who always finds some way to squeeze in a bit of colour.

And yet this man drew my attention. Perhaps it was his aquiline nose, or his prominent cheekbones, or his pale complexion, or his extremely neat black hair; for whatever reason, I was intrigued, and wandered over to him.

The man clasped a wine glass in his spindly hands, but I noticed that none of its contents had yet met his mouth. He stood quite still, but his eyes roved about expeditiously, settling on everything for less than a second and moving on again. I, however, went somehow unnoticed, until I decided – just out of curiosity, of course – to alert him to my presence with a quiet cough. It was one that I barely heard myself, but his eyes immediately snapped down to fix upon me.

“Good evening, milady,” he said, bowing slightly. His voice seemed to suit his appearance perfectly; it rang of wealth but not arrogance, of intellect but not slyness.

“Good evening,” I replied, slightly too late. “Are you here for the opera?” Immediately after speaking I realised that it was an absurd question; there was no other event taking place there, so why else would he be present? However, his response was a little peculiar, which relieved me.

“The opera?” he asked, as if it were the first time he had heard mention of it, before seeming to remember. “Ah, yes . . . The Barber of Seville, is it not?”

His eyes began to move again, looking over both of my shoulders, to the right and to the left, before finally locking on the entrance. Following his gaze was irresistible. But I could not see anything noteworthy; a portly gentleman, accompanied by his portlier wife, were just entering, another couple were moving over to blend into a group on the right, and the waxwork porter was as immobile as ever. I looked back to the man in front of me to inquire about what he had seen, but found he was already looking elsewhere, peering intently at one of the statues. I held my tongue.

It was then that Celia, having abandoned her attempts to peek through the door, came hurrying up alongside me. She was in the middle of saying something along the lines of “don’t you think they should have those glass doors like the French people”, when she noticed the man standing in front of me and stopped instantly.

“G-good morning,” she said after a short while. “I mean good afternoon! Evening!’

‘Good evening to you, too,” the man said, smirking.

“I’m Celia, this is Violet,” Celia continued, and I realised that I had never mentioned my name, nor asked the man for his.

Celia and I both waited expectantly for him to give us his first name, but he did not indicate in any way that he was going to. Celia began, “What about your . . .”

But then someone said from behind us: “Ladies and gentlemen, if you could kindly take your seats” and Hawking made his way down to the doors. Celia and I followed. I found myself, in the midst of a mass of people, buffeted through into the auditorium, separated from them both; but finally I managed to extricate myself, slipping quietly out to the left into what I discerned, from brief glimpses of Celia, was our row. She had already found her seat. I took my place next to her, and shortly afterwards Hawking arrived, taking a seat on my right.

“Quelle surprise,” he remarked, upon noticing that his seat happened to be beside ours.

“Do you speak French?” I asked.

“No,” he said simply, and that was that.