Emmet Dalton: a revolutionary with a second act 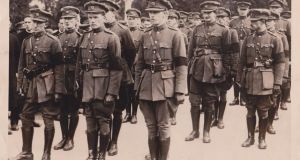 As a boy in Dublin in the late 1950s, I saw a magical sight one Sunday – a film being made on the docks near the Custom House. I joined the excited crowd of onlookers, and watched in fascination as Hollywood legend James Cagney ran along the dock as part of a scene for the movie Shake Hands With The Devil. I was also enthralled by the ancient armoured car being used in the film. I knew from the newspapers that the man who helped to bring such film-making excitement to Ireland was Emmet Dalton, who founded Ardmore film studios near Bray, Co Wicklow. I became fascinated by Dalton, whose biography, Emmet Dalton: Somme Soldier, Irish General, Film Pioneer (Merrion/Irish Academic Press), I have now written.

As the title suggests, there was much more to Dalton than the founder of Ireland’s first film studio. Born in America, he grew up in Drumcondra, Dublin, and attended nearby O’Connell School, where I was educated myself. A couple of the elderly Brothers at O’Connell’s in my era had known him well. As a young officer with the Royal Dublin Fusiliers, Dalton fought at the Battle of the Somme, witnessing the death of his friend, poet Tom Kettle, and winning an award for bravery. Demobilised in Germany in 1919, Capt Dalton returned to Dublin and during the Anglo-Irish War became IRA director of training. He bluffed his way into Mountjoy Prison in a daring but unsuccessful attempt to rescue IRA leader Sean MacEoin.

He advised Michael Collins during the difficult Anglo-Irish Treaty talks in London in 1921, encountering Lady Lavery and Winston Churchill. During the truce, he held the extremely important post of chief liaison officer, dealing on behalf of the IRA with the British. Then he oversaw the takeover of military bases as crown forces left Ireland. Always loyal to Collins whom he idolised, he took the Free State side in the Civil War, became one of the founding fathers of the National Army, and commanded the artillery bombardment of the republican HQ in Dublin’s Four Courts.

A brilliant and brave strategist, Maj Gen Dalton, aged only 24, led crucial seaborne landings in Co Cork that helped turn the tide of war against anti-Treaty forces. Then Dalton was traumatised when he saw Collins shot dead in an ambush at Beal na mBlath, west Cork, on August 22nd, 1922. Dalton propped up a dying Collins against the armoured car Slievenamon, in a desperate attempt to apply a field dressing to the gaping wound at the back of Collins’s head. (This was the same armoured car I saw during filming on the docks in 1958.) Concerned by the introduction of draconian death sentence measures to quell republican insurgency, Dalton left the army in late 1922, became first Clerk of the Senate, but resigned in 1925.

At this stage, many men would have reckoned they had had enough excitement and adventure to last them a lifetime. But there was a “second act” in Dalton’s career, and he would go on to become a film producer and a founding father of the Irish film industry. In the meantime, he sought to support wife and family through a range of business pursuits. He sold insurance, and was an agent for weighing scales and Scotch whiskey. He sold encyclopaedias – one of his customers was the father of writer Tim Pat Coogan. For a period in the 1930s he worked as a private detective from an office on Dame Street although, like his fictional counterpart Philip Marlowe, he did not do divorce cases. At one stage he drank heavily – some believe it was due to the trauma of witnessing the deaths of friends such as Kettle and Collins. Then, with his usual self-discipline, he gave up drink totally.

A great sportsman, Dalton, who had once played soccer for Bohemians, was a member of Hermitage golf club and became one of Ireland’s leading amateur golfers. On business trips to Dublin, Paramount film executive David Rose liked to play golf with Dalton and persuaded him to take up a sales job in war-time England, in 1941. Dalton worked at selling Paramount films to the cinemas in Liverpool, was later sales manager in Leeds, before settling in London. He reportedly declined an offer to join the British commando forces. As a semi-professional punter, Dalton was a regular at the major race meetings and owned, or part-owned, a couple of racehorses in the stables of leading trainer Noel Murless.

After leaving Paramount in 1947, Dalton worked as a film distributor in Britain for legendary Hollywood mogul Sam Goldwyn. The studio boss knew all about Michael Collins, having made a film based loosely on the Big Fellow, Beloved Enemy (1936), and must have been intrigued to meet the man who was with Collins when he died. In the mid-1950s Dalton went into film and TV production himself, working initially with other business partners, and investing in Nettlefold film studio in Surrey. Some of his associates were left-wing Americans who had moved to London because of the “red scare” in the US, such as Carl Foreman, who had scripted the acclaimed High Noon.

Dalton collaborated with another American exile, Hannah Weinstein, who made the highly successful Robin Hood TV series. Eager to develop a film industry in Ireland, with business partner Louis Elliman, he worked out a deal with the Abbey Theatre to make films, some based on Abbey plays, and using Abbey players. He secured financing from an Irish-American business tycoon, Tom O’Neil, who had bought RKO Pictures. Dalton bought Ardmore House, a Georgian mansion set on more than 30 acres near Bray, and with the aid of state finance arranged by innovative minister Sean Lemass, built Ardmore Studios.

One of Dalton’s best-known films was This Other Eden – the female lead was played by his daughter Audrey, who had become a film star in Hollywood. The studio attracted film-makers from abroad, such as the makers of Shake Hands with the Devil. There was labour unrest arising out of inter-union disputes, and sadly Ardmore went into receivership in 1963. The studio ultimately survived under other managements, vindicating Dalton’s vision in the longer term.

With military-style precision, Maj Gen Emmet Dalton died in Dublin on his 80th birthday, March 4thm 1978, and was buried at Glasnevin with full military honours, not far from the grave of Michael Collins.