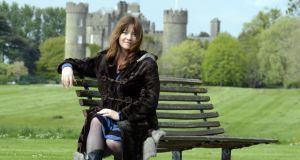 Eimear McBride, pictured in the grounds of Malahide Castle, wrote A Girl is a Half-formed Thing in just six months, but it took nine years to get it published. Photograph: Dave Meehan

Eimear McBride is one of three authors to have been shortlisted today for the Desmond Elliott Prize, the “most prestigious award for first-time novelists” according to Britain’s Daily Telegraph, for her novel A Girl is a Half-formed Thing.

The other nominees are The Letter Bearer by Robert Allison (Granta) and Ballistics by DW Wilson (Bloomsbury). The winner will be named on July 3rd and receive £10,000. The prize is named after the acclaimed publisher and literary agent, who founded his own agency and nurtured authors such as Jilly Cooper and Anthony Horowitz.

McBride, who was born in Liverpool in 1976 to Irish parents, grew up in Sligo and Mayo. She wrote A Girl is a Half-formed Thing in just six months, but it took nine years to get it published. Galley Beggar Press of Norwich, which is where McBride now lives with her husband and daughter, finally picked it up in 2013.

It is a story of sisterly love which has already received much critical acclaim, described as “genius” by author and critic Anne Enright. The author depicts in her own singular language a young woman’s relationship with her brother, and the long shadow cast by his childhood brain tumour. Chris Cleave, chairman of the judging panel, said: “A Girl Is A Half-formed Thing is wild, brave, moving and darkly cryptic.”

The novel has already won the 2013 Goldsmiths Prize and been shortlisted for the 2014 Folio Prize and the 2014 Baileys Women’s Prize for Fiction, the winner of which will be announced on June 4th.

Former theatre director and marketing copy-writer Robert Allison’s second World War novel, The Letter Bearer, is, according to Cleave, “a wholly original allegory of our struggle to find identity.” It follows a nameless motorcyclist left for dead in the Libyan desert. Found by a band of British Army deserters, with no recollection of who he is, the amnesiac rider is forced to confront not only his identity in the absence of rank, class or status but also his relationship to his rescuers. Allison skilfully raises questions about trauma, guilt and man’s instinct for personal survival.

Cleave praised DW Wilson’s Ballistics, as “a combination of supreme elegance of form with hard-bitten wisdom”. The winner of the 2011 BBC National Short Story Competition, Wilson has already received high praise for his work, and refers to his own writing as “sad man fiction”. In Ballistics, we meet Alan West, sent, by his grandfather, on a mission deep into the Canadian Rockies to retrieve his own father, lost to him since infancy. In this narrative, set against a backdrop of burning mountains, Alan unravels his past and the climactic events that led to his parent’s disappearance.