Eimear McBride: ‘I really didn’t want to write about this’

The writer’s exceptional debut novel, about family, emigration and death, echoes her life – but it almost didn’t get published 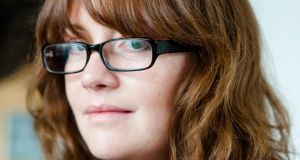 Eimear McBride: ‘The big presses liked it but said they didn’t know what to do with it because anything experimental is deemed something that won’t sell’

Great publishing stories come around once in a while, usually involving multi-publisher fisticuffs and six-figure sum contracts. Eimear McBride’s story is not exactly one of those, but it’s a tale of tenacity and long-overdue recognition.

Her exceptional novel, A Girl Is a Half-Formed Thing, has finally been published after a long struggle to find a home. “Nine years ago, there was a lot of interest in it. The big presses liked it but said they didn’t know what to do with it because anything experimental is deemed something that won’t sell. The most disheartening aspect was how near it got. I received all these lovely responses, saying that it was beautiful and affecting but they couldn’t publish it. If they’d said, ‘This is terrible!” it would have been easier,” she laughs.

We are sitting outside a Dublin cafe the night after McBride’s book was launched at Hodges Figgis. As her name suggests, she is Irish but has lived a peripatetic life. She was born in Liverpool to Irish parents. When she was 14 the family moved to Sligo, and then on to Mayo. At 17, she left for London.

She lives in Norwich now with her husband and daughter, and her Irish accent has a Norfolk tinge. That is also the hometown of Galley Beggar Press, the publisher that took a punt on her.

The book is unlike most you will read this year. It is written in an interior voice that eschews grammar and prepositions. It has lyrical cadences and often rhymes, but its beauty is at odds with its dark themes. “Girl”, the unnamed narrator, guides us through her chaotic life in stream-of-consciousness, and McBride heard the word “experimental” a lot from publishers who were turning her down.

Raised by a violent mother, who has been abandoned by her husband, the girl and her unwell brother find solace in each other. “I wanted to try something different with voice,” says McBride, “and see if there was a way of relating one person’s experience very directly to the reader. I tried to write what I saw in my head. So it was based on images, not words.”

Reading Yeats
There is a musicality to the language. I ask if she writes poetry. “No, but I would say that Yeats is definitely an influence, and a lot of that is to do with growing up in Sligo. The Stolen Child is definitely in there, too.”

She refers to the final chapter in the book, and a crucial metaphor for the story: the girl’s brother is terminally ill. It is poignant as McBride’s brother died in similar circumstances at 28. This, she says, was the hardest thing about writing the book.

“I really didn’t want to write about this, but in some ways it was cathartic. A year after my brother died, I went to Russia for two months because I wanted to be alone. I was in St Petersburg, with the white nights of summer and no darkness. I had insomnia for months so I wandered around, looking at everything. Then it hit me that I wanted to work towards writing.”

Tentatively, she wrote the book while employed as a temp, rising early to write, but found the juggle difficult. When her husband, William Galinsky, landed a job curating the Cork Midsummer Festival, he encouraged her to take time off to finish the book. (She calls him “my patron”.)

The novel also explores the Irish family, emigration and – through the girl’s experiences – sexuality. After she is abused as a young teenager by a relative, the girl uses sex as a form of assertion and connection. It is both an anaesthetic and necessary exploration. “It becomes her way of dealing with anxiety and difficult emotions,” says McBride. “It gives her control in specific situations when the rest of her life is out of control.”

The shadow of religion hovers over the family and their community. There are prayer meetings and statues, and a dearth of compassion from the most ardent devotees of God. “Growing up in 1980s Ireland, the evangelical movement was a part of most people’s lives. Because I live in England now, I hadn’t thought about it for a long time, but it started to bubble up, the strangeness of it.”

A Girl Is a Half-Formed Thing revels in its own oddness, but demonstrates McBride’s heft as a writer. The initial blows of rejection left her unable to write for years, but she is now redrafting a second novel. She also hopes that bigger publishers will take more risks. “It shouldn’t just fall to independent presses – large publishing houses should siphon off some of their vast wealth to champion experimental fiction.”