Eimear McBride: ‘I’m sick of having to live to the agenda of angry men’

Interviews of the Year: In her difficult second novel, McBride tackles love, sex and vulnerability. Here she expounds on Ireland’s love of secrets and slams ‘sniggery’ male critics 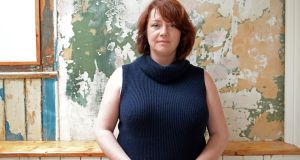 Eimear McBride: “You are very vulnerable to ridicule when you write about sex.” Photograph: Eric Luke

The interview is almost at an end when I ask Eimear McBride if she had an unhappy childhood.

“Oh my God,” she says, wide-eyed at the question. But McBride is nothing if not an explorer of how a person comes to be. The young female protagonists of her new novel The Lesser Bohemians and the acclaimed A Girl Is a Half-Formed Thing buck and writhe under the weight of their origin stories. And so she answers with good grace.

“Kevin Barry has a very interesting line on it, which is that the loss of a parent early in life often makes a writer. I think that’s true.” (McBride’s father died when she was eight. The Lesser Bohemians is dedicated to him.)

“It knocks a hole in the idea of immortality very early on in life and, because of that, a different kind of understanding of the world comes in that you cannot escape. And that makes writing more inevitable I think, as a way of understanding.”

The Lesser Bohemians is the story of an Irish drama student’s love affair with an older actor in London. Like the narrator, McBride moved to London from Ireland in the 1990s, to study acting in the prestigious Drama Centre. She was 17. She had taken a notion, she says, that acting would stop anything bad happening to her.

“I was much more superstitious in those days. I thought, Well my dad died when I was eight, and that was hard. I had a bad time at school and all that, but that’s the bad stuff. Now I’m going to be an actor and all the bad stuff is behind me and somehow having had that, it sort of protects me from that happening again. It’s a real child’s logic.”

Then, when McBride was 22, and had completed the acting course, her brother died of a brain tumour. “It was the end of a whole way of thinking about life. I understood that the world was more savage than I had wanted to accept it was . . . and that was not an easy thing to cope with at that age, when you’re just supposed to feel invulnerable and that you can take on the world. I didn’t, and I was a mess, and nothing got better for years and years afterwards.”

“It all worked out fine in the end.”

But that fine ending took its time.

Much has been made of the publishing story of her debut novel, A Girl is a Half-Formed Thing. It was written in a swift six months, when McBride was 27, but languished in a drawer for nine years, rejected by many for its modernist style, before finally finding a publisher in Galley Beggar Press in Norwich, and then huge international success.

This “difficult second novel” had a similar gestation period. It took McBride nine years to write, and so straddled both the failure and success of its predecessor.

“It was difficult to keep the weight of failure off the book,” she says.

“The beginning of writing this one was, my husband and I moved from London to Cork. I was reluctant because I liked living in London,” she says.

When her husband, William Galinsky, got a job running the Cork Midsummer Festival, they agreed she would use their time there to “write in the attic”. They sold their London home, and any money leftover was “writing money”.

McBride began to think about London whenever she sat down to write. “First it was homesickness for it and then it was thinking about that London that I had known really as a very young woman.”

She was initially reluctant to delve into this “closed part” of her life. She had anxiety about being a “failed actor”. It was around that time her brother died. Writing gave her a chance at “reclaiming something joyful from my youth, from what had seemed kind of a terrible time”.

McBride worked on her second book for six years before Girl was published. She persevered with a similar fractured language, although here it blossoms more lyrical as the book progresses. “I wasn’t writing it for publication.”

She also revisits the theme of childhood sexual abuse. The narrators of the two novels are, she says, “two sides of the same coin, but Girl is about that moment of trauma. Bohemians is about the life after trauma and the legacy of abuse. I kept thinking everyone’s just going to say ‘That’s all she can write about.’ ”

The new book, however, is more hopeful “about joy and about love, however unsuitable and uncomfortable and messy it is”.

Initial comparisons to Joyce left McBride “flattered and gobsmacked”. He was a major influence, but “Joyce is centring his work in the middle of the world and going out into the universe, and I’m about going as far inside humans as possible”.

“It seems to me that it hasn’t got easier to be a woman. We are only chased down and exploited more and more. You just see it happen to women in the media all the time. A woman says anything and there’s going to be 50 dickheads waiting to rip the skin off her and to misrepresent what she says.”

She believes her only weapon is to “write honestly and say ‘f*** you’ to all of those people.”

McBride becomes riled when talking about the reception her book has had from certain critics – “a couple of very paternalistic males who don’t like this book, don’t like the successful woman, don’t think I should be getting above myself”.

They have dwelled in particular on the book’s abundant sex scenes, which are not, she says, about titillating the reader but simply “how the characters communicate. You are very vulnerable to ridicule when you write about sex.”

As a result, some of the reviews have been “sniggery . . . ‘Oh, her knickers are a character all in themselves, they come up and down so many times.’ ”

This left her embarrassed at first, but then “I just thought, No, you are the reason that I am writing books like this. It’s that kind of attitude, because you know what? I’m really sick of having to live to the agenda of angry men”.

Still, she was nervous about inhabiting a male voice in part of this new novel.

“I really shied away from it at the beginning because of the terrible lie that women can’t write men. It’s okay for Flaubert to say ‘I am Emma Bovary’ but it can’t work the other way because, obviously, the penis is such a singular organ that nobody can understand how it could work or its effect on the brain,” she says.

She listened to male singer-songwriters such as Nick Cave, “to access the internal life of men”.

McBride, who now lives in Norwich, did not set out to write the old Irish tropes of wakes and prayers in Girl, but found she could not stop herself, and something of that reappears in Bohemians: smaller nods to guilt and sin.

“Ireland is a society that loves a secret, and I think its important to keep looking at the things we find interesting because it means there’s something there,” she says.

“You get English critics saying ‘Why do Irish writers hate Ireland?’ And I think this is so untrue, but I think Irish writers feel an impetus towards digging underneath the story that we tell about ourselves in public and go against this smiley, friendly image of Ireland.”

The new book is not about Ireland she says, but the Irish experience in London, timely now “because that bandwagon of generalised racism towards the Irish has moved on to Muslims and eastern Europeans now. I think the Irish community could be a lot more vocal about that”.

There is a scene in The Lesser Bohemians when the lovers are discussing Andrei Tarkovsky’s film Nostalgia and whether there are more important things than happiness. Where does she stand?

“I remember reading Tarkovsy and him saying what’s important in life is to work out what you were supposed to do and then do it. And that’s my guiding principle.”

And refuge comes with bunkering down in her own life.

“Friday night, my husband and I put the baby to bed, put on the telly, eat Chinese takeaway and that is the best part of every week. People say great things [and] terrible things about you, but you learn to keep them on the outside. Close the front door.”

The Lesser Bohemians is published by Faber & Faber