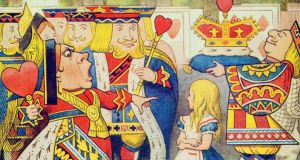 'The Queen has come! And isn't she angry.', illustration from Alice in Wonderland by Lewis Carroll (1832-9) (colour litho) John Tenniel

In the 150 years since its publication, Lewis Carroll’s Alice’s Adventures in Wonderland has been subjected to scores of revisions and versions, from the 1907 parody Alice in Blunderland to the more serious Millennial treatment Alice in Underland. The labyrinthine children’s book has also spawned dozens of literary tributes, and in recent months three digital versions of Alice in Wonderland have appeared.

The first is Alice’s Adventures in Wonderland: Enhanced E-Book Edition (Kindle Edition, £0.99), which was released at the end of 2014. It renders the text in traditional ebook format that offers all the usual facilities for highlighting and making notes. It makes its mark, however, through the added extras, which offer scholarly annotations and references that give deeper meaning to all the riddles and puns in Carroll’s famously intertextual book. It includes John Tenniel’s original illustrations, for example, but it also reproduces the illustrations of various artists who have crafted their own versions of the famously self-assured character over the years. The best of these are Arthur Rackham’s romantic Alice of 1907, which creates a pretty watercolour contrast to Tenniel’s absurd, almost ugly, original pencil drawings. The rich oil version of US “domestic” artist Jessie Willcox Smith, from 1923, is a particular treat: the simian features of the Queen of Hearts and other malicious minor characters revealing a fascinating social context of their own.

In case it is visual stimulation you are after, it also includes a comprehensive database of the many films spawned by Alice’s adventures, from the first silent screen version in 1903 to the Betty Boop tribute of the 1930s to the most recent film adaptation by Tim Burton in vivid 3D.

Alice for the iPad (iTunes, £3.99), an enhanced ebook developed by Atomic Antelope and released this year, is a treat for the eyes. The textual layout is really attractive and easy to read, rendering the unabridged text on sepia-tinged pages that lend a contemporary steampunk sensibility to the story. Tweedledum and Tweedledee supervise the contents page, which is framed like a puppet-show, their round evasive faces jutting just above it in quizzical mischief.

The app’s enhancements come in the form of “live” versions of Tenniel’s original illustrations, with mixed success. Some of the pictures merely gently vibrate. In the best cases, this gives the impression of characters nodding their heads; occasionally it is just nauseating. Elsewhere, you can help Alice grow and “shut up like a telescope”, and rock “the dreadfully ugly child [that] makes rather a handsome pig” to sleep.

The Cheshire Cat reveals the app at its best, as it makes its presence known through the camouflage of trees, appearing and vanishing just as Carroll suggests with such sinister glee.

The most effective animated illustration, however, is the final one, when an army of playing cards attack Alice just before she wakes up. If all this activity sounds as if it will divert your attention from the text, the interventions in Alice for the iPad are actually fairly minimal; if anything the version feels tokenistic rather than distracting. However, the layout of text is undeniably good, and it is easier to read than many free versions of the classic. For that alone it is worth the small investment.

Through the Looking Glass, and What Alice Found There

The illustrations are based on Tenniel’s originals but they are altered to incorporate key New York landmarks. Thus the White King becomes a chess piece version of a skyscraper, and the Red Queen a Statue of Liberty draped in scarlet robes. Some of the animated sequences are clever: a chandelier swings across the page illuminating the text and pictures piece by piece, while a bare light bulb in the Hatter’s dungeon cell uses a similar trick to play with the narrative reveal. Others, however, suffer unnecessary tampering. Humpty Dumpty, for example, wobbles on a girder far above the city in the app’s most typical style, the gently nodding effect used so liberally in Alice for the iPad. The most potentially dramatic sequence, meanwhile, (the firework scene at the end of the book) is, literally, a damp squib: coloured spots are not the same as rainbow explosions in the air. There is an intermittent soundtrack too that is a bit distracting as it comes to life only on particular pages rather than adding a background atmosphere to the whole book.

Through the Looking Glass has been subject to almost as many versions and interpretations since it was written in 1871, but it has proved slightly less malleable than Carroll’s original work, and Alice in America will probably be of more interest to Carroll fans than independent readers.