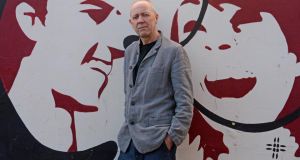 Hugo Hamilton: Like the author, the Dublin Palms narrator was born to a German émigré mother and an Irish nationalist father who forbade the speaking of English in the family home. This“had the effect of turning all language into a fight”. Photograph: Eric Luke

Dublin Palms is a meditation on itinerancy and identity, delivered in the form of a fictional memoir. Having returned to Dublin after many years in Berlin, Hugo Hamilton’s narrator feels curiously estranged from his surroundings: “the things you love turn against you, they feel snubbed and they will snub you back. You have become a spectator.” Overhearing his partner in conversation with her mother, he is envious of her easy storytelling style: “Listening to Helen speaking on the phone to Canada comes close to writing a novel. It has that first-hand honesty I want, nothing invented, just the latest news. If I can write the way she speaks, I will be happy.” The narrative voice in these pages endeavours to do just this, combining the breezy economy of anecdotal gossip with the confidential intimacy of a heart-to-heart chat.

The novel’s title signals its preoccupation with place and belonging: the palms in question are “[A] non-native variety pretending to be palm trees. They manage to grow well in the mild climate . . . There must be something in the soil they like.” Like the author himself, the narrator was born to a German émigré mother and an Irish nationalist father who forbade the speaking of English in the family home, which “had the effect of turning all language into a fight”. Educationalists say a multilingual upbringing is developmentally beneficial, but Hamilton’s protagonist found it onerous. Sentence composition was a chore: “I was faced with a choice of three versions of the same object, like a street trick where the correct word was hidden under one of three matchbox hats, lifting the wrong one, the meaning had already moved.”

He works for a cultural institution tasked with preserving traditional Irish music and the “ghost language” of Gaelic. In the course of his duties he encounters an accordion player from Galway; a native singer from Cork; a Uilleann piper with a pulmonary condition, “thin as a lead pencil”, living in a caravan outside Dublin; and a flute player from Mayo who is “not only . . . the best in the country, he was also bald – he’s the best of the bald flute players”. “There was,” he recalls, “no need for the figures to balance out in any commercial sense, no requirement on any of the artists in our catalogue to make a profit. Decisions were based entirely on cultural reasoning, on keeping things alive that would otherwise die without trace. Our loss-making was repaid in a surplus of heritage.”

Desperate to shake off his father’s influence, he became “an impersonator . . . I appropriated other people’s traits, I took on a borrowed posture, anything to escape my own biography . . . I stepped in and out of lives, sampling human features like trying on a suit, constructing the person I wanted to become.” This simple juxtaposition – the pursuit of a fetishised, static idea of national culture in his day job, alongside the studied cultivation of his own, highly malleable persona – forms an implicit disquisition on culture and globalisation. Without state intervention, the specificity of many a “native” culture would indeed perish if left to the mercy of the market; conversely, the present and future of cultural production are being shaped, increasingly, by the kinds of people Theresa May famously disparaged as “citizens of nowhere”.

This is a quietly powerful book, although some of its wisdom crosses the line from elegiac to gnomic. It is hard to know, for example, quite what to make of a pronouncement like “Silence is not emptiness. It’s not the absence of matter. It is a solid state, full of love and language and things collected from childhood.” Occasional single-sentence paragraphs feel somewhat forced in their aphoristic minimalism: “The world is full of things that have not happened.”; “Nothing cuts like a lost friendship.”; “Writing is no place to hide.” And it is perhaps a shame that, although the novel’s interest in language would seem to offer scope for formal play, the multilingual psychic landscape of the narrator’s youth (“I grew up in a language nightmare”) is rendered in a relatively conservative manner, mostly in the form of abstract reminiscences in fairly standard colloquial English.

The couple embark on an ill-fated venture to set up a wellness cafe; the business plan is “not based on sound commercial principles, but on the memory of a café we used to go to in Berlin”. It doesn’t work out, and they resolve to migrate once again – this time to Canada. This is fairly mundane stuff as plot lines go, but Dublin Palms’ overarching themes are compelling and timely. Hamilton’s exploration of cultural heterogeneity, taken together with his narrator’s reflections on the Troubles and the second World War (via his reminiscences about his mother), are particularly poignant in light of the current political uncertainty.