Dreaming of a move to France? Here’s your wake-up call

For many expats a rude awakening follows the dream move to France. When the O’Haras moved to Lot in 2010, they learned the hard way that life in the south of France is not all sipping chilled rosé on a shady terrace, writes Eamon O’Hara, whose book, A French Renaissance?, recounts their experiences 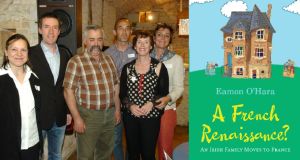 Eamon O’Hara, second left, at the official opening of his local community café, the Gariotte, with the mayor of his village (with moustache) and his wife Tanya, second right

When people hear that you’re moving to the south of France there is often a perception that you’re dropping out, taking leave of the real world, where people have to do boring stuff like work, pay bills and live in places where it never seems to stop raining.

There is no denying that such escapism is part of it, but it’s not so much escaping reality but rather trading one version of it for another.

Our previous reality was one that many people are familiar with: “metro, boulot, dodo” (metro, work, money), as they say in France. We lived in Brussels at the time and our whole lives seemed to revolve around work and careers. It’s easy to get caught up in this rat race and lose sight of the important things in life.

When the children came along we made the decision to try and change things. It wasn’t an easy decision. You have to reject much of what you have come to accept as normal and try to see yourself and the world in a different light. An increasing number of people are grappling with this kind of dilemma, so it felt like it might be worthwhile to try to document and share our experience; hence the book.

The story begins during the property search and continues right up to the end of our second year in France. I think what most people find so surprising is how the reality was really nothing like we expected. From the off, we found ourselves engaged in a struggle to cope with all kinds of challenges: language barriers, mindboggling bureaucracy, wayward builders, inclement weather, and invading alien species (including the human variety!) to name just a few.

Some of it we had expected, but most of it was completely unforeseen. It wasn’t necessarily all bad, just totally different to we had imagined. I sometimes wonder if we were just naive, but the more I talk to other expats, the more I realise how typical this experience is. People talk about living the dream but for the vast majority of people it just doesn’t happen.

This is what I try to get across in the book. I wanted to tell the real story, warts and all, of what this life-changing move has been like for us. I have read many other books on this subject and in general I find they tend to overly romanticise the life of the expat in France. I’m not saying there is no romance to it. Of course France is a very beautiful country and it has many positive attributes but there is also another side to it.

The summertime is obviously when the south of France is at its best. The weather is good, there are lots of people around and every little town and village has a programme packed full of events and activities. However, jump forward a few months to, say, mid-January and the situation is very different.

Firstly, it can be cold and wet, sometimes for long periods. Secondly, with no tourists around and many houses shuttered up for winter, it can feel like the place is totally deserted. And thirdly, when you most need it, the options for socialising are much more limited. Many cafes and restaurants close up for the winter and the few that do remain open usually feel cold and empty.

This is a side of France that many foreigners have no experience of until the take the plunge and move here permanently. By that stage, they are probably also struggling to deal with many other issues, including mindnumbing administration and communicating in a foreign language. Throw in the long periods of separation from friends and family and you start to understand why so many people end up returning home or even worse, why many expat relationships are pushed to breaking point.

But it doesn’t have to be like this. Forewarned is forearmed, and I believe that if people were aware of the real challenges they would be better prepared, have more realistic expectations, and be more likely to make a success of their lives here.

We found our first few years in France very tough but we survived, and now, almost five years on, we have learned not only to cope with but even to enjoy the long, quiet winters. We rent out tourist accommodation, so after the busy summer season we look forward to the quieter winter months. We generally organise holidays in January or February, we stock up on good films, books and other forms of home entertainment, and we get more involved in community activities. In fact, last year we were involved in setting up a local community cafe, which has really helped us to better integrate but has also been really well received by the locals.

The secret, of course, is expectation. If you come to France expecting to find some kind of utopia then you are certain to be disappointed. But if you come prepared for the seasons, and for the inevitable highs and lows, you will soon be celebrating the contrast and discovering new things about yourself and about your adopted country. These are the things that tourists never get a chance to experience and that make living in another country so insightful and rewarding.

Eamon O’Hara is the author of A French Renaissance? (Orpen Press)