Novelist Doris Lessing, who tackled race, ideology, gender politics and the workings of the psyche in a prolific career, has died at the age of 94. Lessing was initially underwhelmed by her win when the news was broken to her outside her London home. 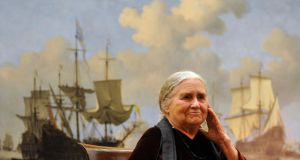 Doris Lessing: “Freedom of choice, the individual in opposition to society and taking moral responsibility for one’s actions are her themes and they dominate her work.”

Doris Lessing was such fun; she was interested in everything and opinionated, as alert to popular culture as she was to literary and historical references. Staggeringly astute observations and pronouncements would be delivered in an accent that sounded like Queen Elizabeth II, a voice that was weak and light, increasingly from another time, yet always assured.

Doris Lessing had the confidence that comes from shaping several generations, and her fiction at its most autobiographical is best described as a candid rite of passage, for her reader as much as for her. Not that she risked misunderstanding; any doubts about where the fiction ends and the autobiography took over are brilliantly dealt with in her characteristically direct memoirs: Under My Skin (1994) and Walking in the Shade (1997).

Her life provided her with an abundance of material, and she used it. Her death, coming as it does just one week shy of her 95th birthday, marks the end of a fittingly long life that will not be compromised by the fact that Lessing was, and will always remain, even in death, an enduring survivor. Commentators are no doubt already debating if she was a matriarch or a prophet, or possibly both. She was both. Yet she was also, and above all, a maverick.

When she won the Nobel Prize in 2007, days short of 88, making her the oldest writer to have been honoured in this way, she sent me an expectedly subversive postcard announcing: “It had to happen; everyone else is dead.”

It seems a blackly light-hearted reaction, but she was not all that surprised. She was aware that her work had created the possibility for change and that many women had transformed their lives because of her iconoclastic influence. Freedom of choice, the individual in opposition to society and taking moral responsibility for one’s actions are her themes and they dominate her work.

Her career may have begun publicly in 1950 with the publication of her first novel, The Grass is Singing, but for Lessing writing had become her chosen form of expression long before anyone else had noticed. She always considered herself a writer and nothing would prevent her from pursuing her vocation.

Resolve
In old age she was a delight, very charming and funny, once she decided she wanted to engage with you – but even then, it was impossible not to detect Lessing’s resolve. As a young woman faced with the dilemma of maternal responsibility versus personal survival, she chose to save herself and paid the price of public censure. In order to flee an unhappy marriage, she left her first two children. That same determination enabled her to fulfil her literary vocation, but it also subjected her for many years to wary admiration.

It is not that difficult to understand why she is best described as a maverick; she personified unrepentant individualism. She was always political in the purest sense, embracing communism for a while, and was invariably a radical, opinionated commentator and natural polemicist.

Above all, she was an engaged witness. Never a literary stylist, she pursued truth, not art, and if her work contains a single abiding thesis, it is the life of women. To explore this theme fully, she wrote from the viewpoint of one woman – that of Doris Lessing and her personal odyssey.

She was born during an extraordinary period – the death throes of the British Empire in Africa – and belonged to a generation brought up on the first World War and then moulded by the second World War. Born Doris Tayler in 1919 in Iran – or Persia, as it was then – she was the child of English parents. The family moved to Southern Rhodesia, now Zimbabwe, when she was five.

Lessing first arrived in England at the age of 30, small, attractive, feminine, apparently fragile yet in possession of a will of iron, a baby and a manuscript. Is she an English writer, or is she an African one? The answer is simple: she is both and neither, she was always elusive, an outsider who became a defining presence.

Reading was her escape from an unhappy childhood on the family farm and also from her anger with herself, the ill-health that caused her formal schooling to end when she was 14, and with her parents, particularly her tragic relationship with her mother, Maude McVeagh, whose own tragic mother had died when Lessing’s mother was three.

Compellingly human
Lessing was formidable, a more driven version of Iris Murdoch, whose intellectualism merged with her academic life as a philosopher and resulted in fiction that is more dreamily idiosyncratic than Lessing’s more driven narratives. Yet Lessing, even at her most determined, is compellingly human. Her novels and stories are set mainly in Africa and contemporary Britain. Her third territory is the “inner space”, as explored in Briefing for a Descent into Hell (1971) and the aptly named Memoirs of a Survivor (1975).

She never denied that much of her fiction was drawn from her life as well as from observation and the imagination. She is – and she is not – Martha Quest from the Children of Violence quintet. Equally, she is young novelist Anna Wulf in The Golden Notebook (1962) and, then again, neither is she Wulf. Anyone attempting to ask Lessing about her life was immediately assured, “it’s all in the books”.

With characteristic Lessing candour, she told me she decided to write her autobiography largely because she had heard that “some biographies, five I think, are on the way”.

By the time I was sent off to interview her in 1999, Lessing was 80. My great friend, Caroline Walsh, then features editor of The Irish Times, said to be careful and not to let her upset me as she was abrupt and had dismissed another colleague in tears a few years earlier.

I braced myself and set off for her west London terraced house. In person, Lessing looked like a beautiful Russian grandmother, a tiny figure with grey hair pulled back in a severe bun, an initially muted murmur and a repertoire of impatient gestures. After a resigned shrug, she directed me into a room and then left me alone.

On the middle of the table in the small, unpretentious, cluttered parlour were several volumes by Joseph Roth, the great chronicler of the dying days of the Austro-Hungarian empire.

I was holding the books when she returned. Once she knew he was one of my heroes, it was like having a conversation with Jennifer Johnston or Edna O’Brien. Lessing spoke animatedly about books, what she had been reading, what she was about to read next and how much she loved cats. She was so easy to speak with I mentioned how wonderful it was to meet someone who had been born in Persia; she laughed long and hard at that.

Parents’ relationship
She told the story of how her mother, having lost her own beautiful, none-too-reliable mother, then as a young woman had lost her true love. During the first World War, when serving as a nurse, Lessing’s mother had tended a wounded soldier who had lost a leg. That man was to be Lessing’s father.

Just as his injury ruined his life, the miserable relationship endured by her parents had a major impact on Lessing’s destiny. A life, she always maintained, is ordained at childhood. Hers had prepared her for flight.

One of the books she gave me was a copy of Guns, Germs, and Steel by Jared Diamond – a short history of everybody for the last 13,000 years. It had won an international science prize. For Lessing, world peace, the environment, justice, human rights, sexual equality, the rights of the child and ideas were the things that really mattered.

Unlike most writers, she was impressively self-critical and described several of her books as “ones I wouldn’t mind not to have written”. Aside from The Golden Notebook, the Martha Quest Children of Violence books are ones she will stand by. The first three were written close together and share a narrative cohesion, while the final two, with their wider, more apocalyptic vision, appeared later, between 1965 and 1969.

She did win acclaim for an overrated 1985 Booker contender, The Good Terrorist. Interestingly, one of her finest books, The Fifth Child (1988), is about a new baby who destroys a smugly comfortable household. A sequel suggested by her German publisher drew Lessing back to the story. Ben in the World, published when she was 80, is another of her best works. Both are shaped by Lessing’s humanity, her great strength.

I almost missed the flight back to Dublin after the interview. She invited me to stay. But I had to go and she phoned one of her friends to drive me to Heathrow. “He’s awfully fast,” she said in a tone that reminded me of Beryl Bainbridge, “but he’ll probably get you there in time.”