Doireann Ní Ghríofa: The woman who fell in love with a poem

More than two centuries had fallen between the mouth of the speaker and the ear of the listener, but somehow, the poem still bound them together 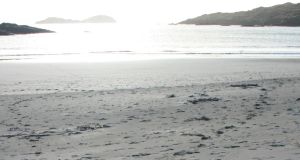 Footprints on Derrynane Strand, the beach next to the house where Eibhlín Dubh grew up.

There once was a woman who fell in love with a poem.

The woman was pregnant and tired. The poem was very, very old; it had been born in 1773, when it emerged from the body of another pregnant woman. On seeing her husband’s horse return home alone, Eibhlín Dubh Ní Chonaill heaved herself into his saddle and found it drenched red. The horse galloped her to the bleak slope where his body lay, and there she knelt over him, howling and drinking palmfuls of his blood. Those anguished roars of hers soon grew into syllables, and then into words, arranging themselves into the familiar pulse and gasp of a caoineadh – a poetic form she had often witnessed as a girl.

The verses born that day were steeped in such raw rage and anguish that they were often recalled and repeated by others in the months that followed, travelling from mouth to ear over years and years. Once transcribed to print, the poem moved onwards through the centuries, entering new imaginations and gathering admirers as it went. The fact that it has sustained the creative exertions of so many may be considered a mark of the poem’s extraordinary depth. Adaptations of note include explorations through theatre by Tom MacIntyre and through film by Bob Quinn, through fiction by Cliodhna Cussen and music by Peadar Ó Riada, through countless translations to English verse, and through measured scholarship by Méadhbh Nic an Airchinnigh, Angela Bourke, and Seán Ó Tuama, among others. In classrooms, too, the caoineadh was read aloud, discussed and ignored by generations of teenagers. This was how it landed in the hands of a schoolgirl who would one day fall in love with it. At first, she pushed it away, bored as she always was by homework, but the poem wouldn’t let go of her. It let itself be found again and again, until at last she fell for its charms.

The poem may not have loved her back, but in its own way it was steadfast. Even when the woman’s life seemed to be spinning from her control, there was one thing she knew she could depend on, one thing that always remained stable. The poem never left her, despite being reduced to a tattered photocopy, handbag-crumpled, grocery-squashed and splattered with dishwater and breastmilk. It stayed by her side when the woman drove herself, wailing, to the maternity hospital. It held her hand through weeks in neonatal ICU. It whispered under her pillow as she dreamt.

The more the woman read the poem, the greedier she became. She wanted to know more of Eibhlín Dubh’s life, to go beyond the poem and learn of this stranger’s girlhood and old age. She wanted to see what became of her children and grandchildren. She wanted to find her burial place and to lay flowers on her grave. Unfortunately, much of the literature dedicated to the caoineadh reduced Eibhlín Dubh’s life to the same thin particulars: wife of Art O’Leary; aunt of Daniel O’Connell. The woman wanted more. She began to ask questions. What traces of a person’s unique joys, rages, sorrows and desires would remain, centuries after death? How much might an ordinary woman – neither scholar nor historian – be able to find of those distant days?

And so the woman began to nose around, poking her way through old books, archives, ledgers, microfilm, old letters, maps and scholarly articles. She gathered facts, not with an academic’s diligence, but with the giddy zeal of a child amassing football cards. The woman cherished every little hint of Eibhlín Dubh’s life she could find. On learning that she was a twin, her heart leapt – suddenly, she could see two sets of little footprints appearing on Derrynane strand. She dedicated herself to that girl, and as she watched, the girl began to grow. The girl grew tall as she walked onwards, leaving that beach behind, and for every room she entered, someone was tiptoeing after her, as close as a shadow: the woman. At Eibhlín Dubh’s wedding, her silhouette lurked from chapel shadows. At night, she stood in damp grass, staring through candlelit windows. She stole letters from the pockets of Eibhlín Dubh’s brothers. She eavesdropped. She peered through keyholes. The fiercer her devotion, the more of the mystery revealed of itself. She discovered things she could never have imagined. Whenever Eibhlín Dubh turned away, the woman followed, patting the ground on hands and knees, in search of fallen clues. Some appeared easily. Others refused to be found.

To study a female life marked by silence is to attempt a cartography of fog. Eibhlín Dubh’s belongings, diaries, letters and documents had all vanished in the mist. What else could be expected? In the aftermath of a life, all is dispersed; little lingers. Perhaps, the woman thought, this life hadn’t been written because it couldn’t be written. Still, she tried, she tried and tried, and although she discovered more of Eibhlín Dubh than she could ever have hoped for, she also felt herself confronted by the essential unknowability of this stranger’s days. She created a tattered patchwork and wrapped herself in it. She grew fond of it, blotted as it was – like all female histories – with blanks, erasures, and silences. There were days when her quest felt like trust, and others when it felt like trespass. Sometimes, she learned, history keeps itself to itself, kicking back in resistance, as though it doesn’t want to be written. Nevertheless, the woman continued.

Every morning after the school-run, she hurried to the free car park, drove right to the roof, and set to work until it was time to pick up her youngest child from playschool. For those hours, she wrote and wrote and wrote. It wasn’t enough; the woman took to drinking coffee late and working while everyone else slept, often falling asleep mid-sentence. Before dawn, she bolted upright from dream to wakefulness with visions that compelled her back to the page. Exhausted, she often felt absent as she typed, as though she was merely an instrument being operated by some force beyond her.

More than two centuries had fallen between the mouth of the speaker and the ear of the listener, but somehow, the poem still bound them together. For every paragraph added to the woman’s portrayal of Eibhlín Dubh, she found some nuance of her own life revealed too. The woman found herself writing about the shapes ordinary desires take in an ordinary life: she wrote of sexual desire and of the desire for safety, the desire for control, and the desire to make oneself invisible. She wrote about collisions between lives, about swerves and narrow escapes. She wrote about the quotidian, and all the humdrum chores of domesticity. She wrote about the compulsion to give and give and give and what remains in the aftermath of such acts. She wrote what small truths she knew: that even in the most dizzying times, an anchor can make itself known; for her, the anchor had come in the shape of the old poem. She wrote about that poem, and of what happened when she chose to kneel in service to a ghost. Every book teaches its author how to write it. The woman found that in looking intently outwards, we are somehow drawn to looking inwards too. In considering the life of another woman, she was surprised to find how much she happened to learn of herself. For years, she wrote. Page followed page. Echo followed echo. The woman found that she had written a book, a book in which Eibhlín Dubh was alive, and so was a woman who bore a striking resemblance to herself. The End.

When she shut the laptop it felt like watching a door slam closed. The woman was alone. Her heart was heavy, imagining Eibhlín Dubh on the other side of that door, alone too – but when the woman stood, she noticed something stirring at her feet. Two shadows had grown there, both trembling, both dark, and both true.

A Ghost in the Throat (Tramp Press) is Doireann Ní Ghríofa’s prose debut. She is also author of six award-winning poetry collections, the most recent of which is Lies (an Irish Times Book of the Year, and an Irish Independent Book of 2018)