Did Yeats accept a prize of Nazi gold? 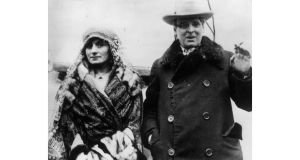 Man of honours: WB Yeats with his wife, Georgie Hyde Lees, in 1923, the year he won the Nobel Prize. Photograph: Keystone/Getty

ON JANUARY 1ST this year, Yeats finally went out of copyright, 144 years after his birth. It was a long, carefully managed career, before and after death. A notable high point was the poet winning the Nobel Prize for Literature in 1923, generally taken as an acknowledgement of Irish independence, writes WJ MCCORMACK

As early as 1909, Yeats thought he was in with a chance, but the winner turned out to be the Swedish novelist, Selma Lagerlöf. Scandinavians featured prominently among the prize’s early recipients, starting with the Norwegian poet, Bjørnstjerne Bjørnson, in 1903, and including his compatriot, Knut Hamsun, in 1920.

In addition to the fame the prize brought with it, Yeats also appreciated the Nobel money. According to legend, he interrupted the telephone call notifying him of the honour with the blunt question: “How much?”

If it remained the greatest prize he garnered, the Nobel was not the last. On February 16th 1934, after Hitler had already come to power in Germany, The Irish Timesannounced that Yeats had been awarded the Goethe-Plakette by the city of Frankfurt-am-Main, together with Hermann Stehr, a “blood-and-soil” novelist. Later in the year, the Nazi-supporting Knut Hamsun was awarded a Goethe-Preis, both prizes originating in liberal civic initiatives in 1927 (the Preis) and 1932 (the Plakette).

Preis winners included poet Stefan George (1927) and theologian Albert Schweitzer (1928), who was thereby enabled to build a house in his Alsatian home village. Another beneficiary was Sigmund Freud (1930), whose papers establish the honorarium at 10,000 marks (George also received 10,000 marks, though he failed to turn up for the ceremony).

While several “regime changes”, national and local, occurred between 1927 and 1934, it is worth noting that, pleased to be honoured in August 1934, Hamsun refused the cash, believing that the new Nazi regime deserved it more than he did. He is said by Mark Deavin to have refused precisely the same sum Freud and George had been given, suggesting a constant amount down the years with regard to the Goethe-Preis.

The Plakette was a lesser thing, instituted mainly to reward administrators and supporters of events commemorating the centenary of Goethe’s death. I have not located any record of payments made to Plakette or Preis recipients. On the one hand, the Nazis were tight with money; on the other, Yeats was scarcely in the same league as Dr Paquet, secretary of the Preis committee. Is it improper to ask on what verifiable documentation we might conclude that Yeats was not a beneficiary of commensurate Nazi (“souls for”) gold, in keeping with the theme of The Countess Cathleen, staged in February 1934 by SS Untersturmbahnführer Bethge? The question bears upon Yeats’s second manoeuvre on the dangerous intersection between flattery and brutality.

The critic and pacifist, Carl von Ossietzky (who championed James Joyce’s work), had been thrown into a concentration camp, where he was most barbarously treated. A rescue campaign was supported by Karl Barth, Augustus John, Thomas Mann, Virginia Woolf and others. One proposal was to have the prisoner awarded a Nobel Prize, thus obliging the regime to release him for the award ceremonies. Peace prizes were in Norway’s gift, not Sweden’s. Hamsun denounced Ossietzky in the press on November 22nd 1935, and no award was announced at that time, despite a campaign that had been active since January 1934.

Yeats became embroiled in the Ossietzky affair early in 1936, when English novelist Ethel Mannin and German dramatist Ernst Toller approached him in London. Their efforts were clumsy, and the official campaign did not consider Yeats worth approaching, despite its reliance on glittering laureates. Yeats told Mannin in April: “If the Nobel Society did what you want, it would seem to the majority of the German people that the society hated their government for its politics, not because it was inhuman . . .”

Advancing this specious argument for inactivity, he cannot have forgotten the praise heaped on him by the German press in June 1935 for his 70th birthday, nor what he called his “Frankfurt honour”. The Nobel committee finally overcame its misgivings and, in 1936, gave the prisoner his peace prize, retrospectively. He was not allowed to travel, and died two years later, aged 50.

Apart from an insinuating passivity, what or who got Yeats into these distasteful relations with the Third Reich? His biographer and sometime political secretary, Joseph Hone, was strongly drawn towards fascism. Active in Dublin for much of the 1930s, the wily German agent, Helmut Clissmann, befriended associates of Yeats’s, including the MacBrides (Maud and Sean) and the Stuarts (Iseult and Francis). Clissmann claimed to have studied for a doctorate in Irish Studies at Frankfurt University but seems to have spent more time arranging holiday trips to the Reich for pupils at the Dublin High School, Omagh Academy, and no doubt other Irish schools. The German minister in Dublin, Eduard Hempel, received Yeats on several occasions, presenting him with suitable propaganda.

In August 1938, Yeats publicly approved the Nuremberg Laws. So much is undeniable fact, though the motive is less clear (a childish love of giving offence?). Or had he taken the Führer’s shilling four years earlier?

WB Yeats and the Glittering Prizes, by WJ McCormack, will be published by UCD Press in March