Dark, cautionary tale of deepest Colombia: In The Beginning Was The Sea

Review: A pitch-perfect translation adds to the Patricia Highsmith-like menace of this debut novel 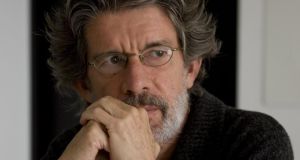 Tomás González: the genius of the Colombian writer’s book In The Beginning Was The Sea lies lies in the telling. Photograph: Juan Carlos Sierra

Book Title:
In The Beginning Was The Sea

A couple decide to make a stand, reject the idle life lived by their fellow intellectuals and instead commit themselves to nature, on a secluded finca, or estate, in coastal Colombia. Austere and determined, they appear, at least initially, to be a righteous pair; he, known as J, with his books, and she, Elena, who is bringing her Singer sewing machine. The journey there is tough, and endless, in hot, dusty conditions, complete with other passengers, some of whom are carrying “bewildered chickens”.

The opening pages of this odd and smoothly intriguing narrative, with its touches of sinister, Patricia Highsmith-like menace, read as if written for the screen. The book itself has a story. Written in the early 1980s, it was Colombian writer Tomás González’s first novel and it was published in 1983 by the owner of the Bogotá nightclub in which González was then working. Now, just over 30 years later, it appears for the first time in English, in a brilliantly laconic, sophisticated translation by Sligo-born, London-based Frank Wynne who, ever alert to every surreal nuance, conveys the disturbing humour with the panache of a master.

Early in the story González makes inspired use of an old sewing machine. Referring to it as the sole relic of Elena’s first marriage, he writes that it had spent almost 20 hours strapped to the roof of the bus. Elena cautions the youth who is about to unload it. “The wooden case that housed the mechanism was wrapped with cardboard boxes held in place with packing tape and twine: the feet and pedal were exposed.”

What comes next is only to be expected. “It tumbled to the ground with a dull clatter.” Elena’s outraged reaction is the first of many that will dominate a fast moving narrative that tends to focus upon the nastier aspects of human behaviour, particularly hers. After unleashing “a torrent of hurried, confused abuse” she then composes herself, “choosing her insults with silky venom.” The boy remains unperturbed: “It ain’t my fault,” he shrugs.

Elena storms into the shipping office to make a complaint, informing the man in charge that the company is rubbish. He merely agrees.

It is a clever book, shrouded in irony. González gives away little and does not believe in larding the text with description; his use of detail is minimal, if invariably telling. Although it is obvious that Elena is beautiful, what is even more apparent is her vicious temper. She emerges as angry and possibly unstable. Her aggression is indiscriminate and it provides the narrative with a striking dynamic. It is as if everyone, the reader as well as the locals and J, who appears far more passive if equally unhinged, tensely await her next outburst.

If the pair are intended to be intellectuals, it may be that González is having fun.

There is little to suggest they are revolutionary or subversive, aside from J’s earlier decision transform his previous apartment into “a gallery of bad art”, discarding art posters – “reproductions of Modigliani, Picasso and Klee” – and replacing them with substandard, though original, efforts. These include a landscape painted by Elena’s brother, depicting “a sunset over the Andes as seen from his prison cell in Ladera”. Nor do the lovers engage in conversations that could be described as satiric versions of intellectually pretentious exchanges. The scant dialogue that passes between them is curt and strained; much of it about money and Elena’s dislike of everyone, once she has succeeded in killing the insect-life infesting the old house: “Keep spraying the place with poison,” says J, “and we’ll all wind up thrashing on our backs like roaches.”

Before long, González, having described Elena’s Trojan efforts at cleaning, mentions the second bedroom, for no apparent reason it seems, only to then add “where they would later open up the shop and where later still, the corpse would be bathed . . .”

It seems quite daring, but is in fact even more cunning. Someone is going to die, or be killed, and judging by Elena’s temper she seems a likely culprit. Yet González takes a further risk by revealing of one of the central characters: “The rains came and so began the first of the two winters . . . the first of his last two winters on earth.”

One of the funniest elements is the developing rapport between J, who takes to wearing shorts and sandals, and seems to be never that far away from complete drunkenness, and his workman, Gilberto, a slapdash but tolerant individual, wary of Elena but prepared to work for J. The men commiserate with each other in the face of Elena’s rages. Also involved in helping the newcomers is Gilberto’s untidy consort, Mercedes, who has just had a baby and waddles about, endlessly nursing the infant, much to Elena’s disgust.

Elena is a bully, and however extreme her reactions – right up to ultimately searching the entire village for her missing ring – she is terrifyingly convincing. J is more shadowy and vague. He is lazy, given to moments of satisfied self-regard. The relationship between them is also believable as it undulates between mounting hostility and moments of passion, which even at its most intense appears to be more about mutual comfort than love. This despite the fact that the first task with which Gilberto is entrusted is the making of a giant bed.

The land itself is a tyrant, either as hard as iron or a festering quagmire rotting in stagnant dampness. When J discovers that his investments have been mismanaged, and that the cattle he has purchased are mostly diseased, he realises that his only hope of survival lies in selling the timber. Much as he hates cutting down trees, he hires a team of timber workers. By then J has also opened a shop, but the locals tend to buy only on credit. More problems for a venture best described as doomed.

Admittedly, it is impossible to feel any sympathy for J and Elena. Not that González is looking for any for them. A moment of unexpected empathy comes when J, having purchased a magnificent stud bull, stands gazing at the beast which is described as being “meek, tall as a cathedral, patriarchal, a sturdy and baroque structure festooned with folds and cascading muscles. In the paddock, it looked spectacular.”

By this point in the novel J appears to have become quasidelusional; he decides dreamily that the bull is a miracle of nature. The increasingly paranoid Elena, who accuses the locals of staring at her and orders a wire fence to be erected around the beach where she swims, is more pragmatic, dismissing the animal as a “complete waste of money”.

The 2004 Nobel Literature Laureate, Austrian Elfriede Jelinek, is quoted on the cover hailing González as “a very pure writer”. It may seem peculiar considering the violent content, yet this is very much a writer’s work of which Nabokov would have approved.

It is sharp and assured. That the central characters are unredeemable is irrelevant, particularly as they are countered by a cast of superb minor players. González’s amoral cautionary tale is based on real events. The story is shocking but the genius lies in the telling and there is no denying that the art has been well served by Wynne’s astute, pitch-perfect translation.