Review: The author does not pursue the jaded cliche of blaming England outright for Ireland’s cultural ills. The Catholic Church and globalisation are also in the dock 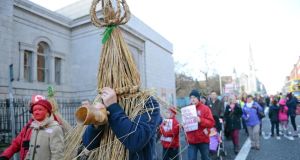 In The Broken Harp, Identity and Language in Modern Ireland, biologist and author Tomás Mac Síomóin presents the decline of the Irish language as one of the most insidious outcomes of the multi-faceted colonisation of the Irish people from the 16th century through to the present day.

Rather than appealing to the Romantic rhetoric of the failed Gaelic revival period, or to the naive optimism of modern-day “official Gaeldom”, Mac Síomóin presents a convincing case relying on consistent reference to the fates of other postcolonial nations, to modern postcolonial theory from intellectuals such as Albert Memmi, Frantz Fanon, and N’gugi wa Thiongo, as well as to his own background in biology which allows him to describe with some authority the residual effects of post-colonial trauma which are, it seems, perpetuated not only through intergenerational imitation of behavioural patterns, but also in the hereditary transmission of the colonial condition via DNA structures and epigenetic profile.

Irish history is not presently a compulsory secondary school subject, as Mac Síomóin notes, but when it is chosen, its narrative is entirely purged of reference to what constituted a veritable cultural genocide in Ireland. As such, Mac Síomóin’s first chapter sets about establishing the nature of the historical relationship between the Irish people and their ancestral language. He does not, however, pursue the jaded cliche of blaming England outright for Ireland’s cultural ills. Rather, he advocates an understanding of Irish history as involving three distinct agents of colonisation, a distinction reflected in the chronological arrangement of The Broken Harp’s central three chapters whose overall narrative may be summarised in the following manner: a process initiated by the Tudors was perpetuated by the Irish Catholic Church who, moving to occupy a power vaccum created by the end of the Irish War of Independence, served to consolidate the English-imposed status quo.

The particular psychological profile of the Irish as a people who for generations had suffered genocide, famine, and sexual crime as consequences of the first two waves of colonisation is said to have engendered a catastrophic vulnerability to the third and present wave of colonisation; that of Anglocentric neo-liberal globalisation, a pet peeve of Mac Síomóin’s.

But is colonisation problematic at all? Róisín Ní Ghairbhí in her recent review of Nicholas Wolf’s An Irish Speaking Island evoked Monty Python’s parody of the decolonising subject who, in questioning the benefits of a colonial relationship (“What did the Romans ever do for us”?), is immediately confronted with the alleged advantages of submission to a colonial other. Mac Síomóin, however, associates a variety of malign symptoms with the colonial condition afflicting Ireland, sensationally terming it “Super Colonised Irish Syndrome”. Such symptoms include, for example, a tendency towards and toleration of alcoholism, the extent of which Mac Síomóin aptly illustrates with an arsenal of alarming statistics, the significance of which he maybe unwittingly mitigates by mentioning in passing that the British colonial power experiences the same phenomenon to a more or less equivalent degree. In a situation he feels is reminiscent of Stockholm Syndrome, Mac Síomóin diagnoses Ireland with a general infatuation with and assimilation to the cultural norms of other Anglophone cultures to the detriment of its own; such a situation is said to already be negatively affecting the experiences of visitors to Ireland, some of whom remark (but just who exactly, we are not told) that the country too closely resembles its fellow Anglophone nations from whence comes the great bulk of Ireland’s tourism-related revenue.

That Ireland submits all to easily to the cultures of its anglophone counterparts is shown by Mac Síomóin to be in keeping with the Sapir-Whorf hypthosis which maintains that the loss of a language entails the loss of a world-view tailored to the centuries of experience shared by those who spoke the language. Adopting the language of the coloniser exposes the colonised subject to a world-view in which he is a mere subaltern partner. On the willingness of colonised peoples to internalise unflattering colonial conceptions of themselves, Mac Síomóin places Albert Memmi’s remarks in the context of Ireland’s consequent inability to assert itself internationally, a reality most recently demonstrated by Ireland’s disastrously apathetic surrender to EU austerity in clear contrast to the ferocious opposition encountered in Greece, insightfully identified by Mac Síomóin as a nation possessing, not coincidentally, an unbroken intellectual heritage unscathed by cultural colonisation. Mac Síomóin’s international perspective derives no doubt in part from having taken his PhD at Cornell University in New York, residing in Catalonia for the best part of the last 20 years.

Mac Síomóin also draws attention to a peculiarly Irish “disjunctive dialogue” which is often glorified as “the gift of the gab”, but is likened in the present work to the fragmented testimony of the traumatised survivors of an AirTransat flight from Toronto to Lisbon which narrowly avoided a fatal crash in 2001, and whose excessive attention to minute details regarding the incident was deemed to be a symptom of post-traumatic stress disorder.

One might argue that the traumatic episodes of Ireland’s past occurred many generations ago; biologist Mac Síomóin is at hand to provide relevant evidence suggesting that susceptibility to PTSD is hereditary, reminding us that a majority of Irish people lived in conditions favouring PTSD for many centuries, and still do in Northern Ireland.

Despite a penchant for postcolonial and microbiological theory, Mac Síomóin admits to having taken a more journalistic approach to expressing himself for the sake of “Seán and Mary Citizen”, which may also explain the prevalence of exclamation marks throughout the text. His research on the subject therefore extends on occasion to sources as incidental as an encounter with a taxi driver, for example.

The Broken Harp, which includes an appendix detailing his reflections on the feasibility of reviving the Irish language, and another on the current state of Irish language literature, may have benefited from a third appendix comprised of snippets from such conversations. In response to claims made in his presence that the loss of the Irish language was a necessary consequence of societal modernisation, and that the revival of Irish on economic grounds makes no sense, I feel Mac Síomóin has omitted a very effective rhetorical question; to what extent is post-Gaelic Ireland, having embraced Anglicisation, more societally modern and more economically stable than a similar-sized country such as Denmark whose mere 5.5 million inhabitants have yet to abandon Danish? To no extent at all, I dare to wager.

Mac Síomóin suggests that a resuscitation of the Irish language cannot be achieved without first mentally decolonising the nation, echoing Frantz Fanon’s call to discover that the coloniser’s conception of the colonised was nothing but a “hoax” which nonetheless needs to be demolished after colonisation ever before the considerable psychological effects of colonisation can be reversed. Mac Síomóin thus laments the common conception of Irish speakers in popular speech as “eccentrics” or “fanatics”, whose rights, accorded to them by the EU, if not by common sense itself, are consistently denied to them by Irish governments.

Such rejection of the ancestral language is unsurprising in light of Thiogo’s writings, which present such rejection as a hallmark of the realisation of the imperial goal. Perhaps more surprising then, is the success of Hebrew in Israel, which Mac Síomóin presents as an encouraging precedent for the revival of other ancestral languages, wisely accompanying his espousal of Israeli linguistic policy with a footnote assuring readers of his outright condemnation of Israel’s policies regarding Palestine.

Mac Síomóin is not all doom and gloom, and although he does warn of the imminence of the death of the Irish language, he devotes an entire appendix to suggesting sociolinguistically sound solutions to the problem, the extent of which tends to be unhelpfully understated by “official Gaeldom”. Mac Síomóin is not, therefore, marginalising any single group in his work; the entire populace of Ireland are diagnosed with this notion of Super Colonised Irish Syndrome. The Irish public must together acknowledge the very existence of the problem, before a necessarily huge amount of energy can be expended on attempting to solve it.

Seaghan Mac an tSionnaigh is a PhD student at Mary Immaculate College, Limerick