Crayons on strike draw a hilarious picture for all ages 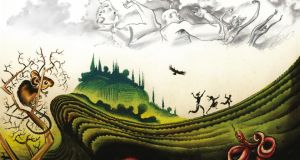 It has, so far, been a good year for those children’s books in which the writer’s words and the artist’s illustrations join forces to create something striking and original. Many of these are books intended primarily for the younger reader, between, say, the ages of five and nine, who is gradually growing in literary and linguistic confidence. Such material, besides being entertaining and stimulating in its own right, is extremely important in aiding the development of reading taste and experience. Here are some recent titles in this category, any or all of which may well provide the foundation for a lifetime’s pleasure in reading.

Imagine a situation where a child’s crayons go on strike, each of them sending him a letter complaining of their individual colouring functions: how is the situation to be resolved? This is the dilemma confronted by young Duncan in The Day the Crayons Quit (HarperCollins, £12.99), where Drew Daywalt’s hilariously funny text finds the perfect illustration in the joyous and mischievous pictures of Oliver Jeffers. Crayon art is raised here to totally new imaginative levels in a book whose appeal should cross all age boundaries.

The vivacity of Daywalt and Jeffers gives way, in Lemony Snicket’s The Dark (Orchard, £11.99), to a world which, initially at least, seems much more sombre. Numerous children’s books feature narratives suggesting how a fear of the dark may be overcome but rarely in such economical terms as Snicket employs. Jan Klassen’s artwork, a sequence of variations on themes of darkness and light, captures precisely the spareness of the prose as we watch young Laszlo, the central character, emerge from one to the other.

Stylishly and evocatively illustrated by PJ Lynch, Mysterious Traveller, by Mal Peet and Elspeth Graham (Walker Books, £12.99), blends an excellent sense of setting and a rich understanding of characterisation. The ancient north African desert, depicted equally vividly in the book’s verbal and visual imagery, serves as location for a poignant story that, in essence, is about love and loyalty, trust and endurance. It is all the more poignant for being told in a style that echoes some of our oldest stories.

Echoes of ancient stories, particularly of creation myths, may be detected also in Mouse Bird Snake Wolf (Walker Books, £9.99), where David Almond’s text and Dave McKean’s pictures are tellingly united to create what is, in effect, a short graphic novel. At its centre are three children endowed with the ability to create what they see as missing from their world while, in the skies above, the gods luxuriate in their indolence.

This is a genuinely thought-provoking fiction about the strengths and limitations of the human imagination, not least its darker corners. McKean’s artwork, spiky and occasionally disturbing, adds its own frisson to the narrative.

Sub-titled An Epic Tale from Ancient Iraq, Kathy Henderson’s Little Prince (Walker Books, £4.99), illustrated by Jane Ray, retells in straightforward linear prose “the oldest written story in the world”. Its hero, the Little Prince of the title, Lugalbanda, is determined to play his part in his country’s military conquests. His transition from boy soldier to something altogether more elevated brings its share of high and low moments, many of them involving encounters with “a monster of the skies” known as the Anzu bird. Ray’s black-and-white illustrations enhance the story’s glimpses of distant times and faraway places.

Readers already familiar with the Claude books of the writer and illustrator Alex T Smith will need no encouragement to find their way to his latest title, Claude in the Spotlight (Hodder, £4.99).

Here, the redoubtable canine hero, complete with matching red beret and sweater, and accompanied by his friend Sir Bobblysock, ends up in a madcap dancing class in, moreover, a haunted theatre. Smith’s wit (in both prose and cartoon-style pictures) is sharp, knowing and sophisticated: a total delight.

Translated by Bill Nagelkerke from the original Dutch and attractively illustrated in colour by Marije Tolman, Sylvia Vanden Heede’s Wolf and Dog (Gecko Press, £5.99) is an award-winning collection of nine quirky short stories featuring, in the main, an ongoing dialogue between the two cousins of the title.

The playful possibilities of language are cleverly exploited, and, once the reader has become accustomed to the book’s idiom, the humour becomes quite engaging as we watch the animals strive to outshine (in all senses) one another.

The young person who yearns for a pet is a popular figure in children’s fiction and appears once again in Julia Green’s Sylvie and Star (Oxford University Press, £5.99), illustrated by Paul Howard. Moving between London and Tuscany, this is the story of Sylvie’s desire to own a puppy – but when Star eventually comes along and turns out to be of rather different pedigree from what Sylvie might have been expecting, the question of ownership becomes much more complicated. Green writes convincingly of childhood dreams and disappointments, of friendships and families.

After a trio of dog stories we must, to end, redress the imbalance with something set in the cat world. Anne Fine’s The Killer Cat Runs Away (Doubleday, £10.99) features the fearsome feline called Tuffy: “I’m not called Tuffy for nothing,” he assures us in the opening paragraph of this first-person tale of his decision to leave his owner, Ellie, his ensuing (mis)adventures and the consequences for all concerned. But just how much of a Tuffy is he really? Thomas Docherty’s black and white illustrations are appropriately scatty.