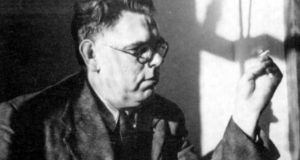 Máirtín Ó Cadhain: is Cré na Cille a modern masterpiece, as John Banville says, or just a crude expression of Ó Cadhain’s bitterness about the decay of Gaeltacht culture?

‘It’s time for Cré na Cille in English,” Prof Michael Cronin, of the school of applied language and intercultural studies at Dublin City University, declared in The Irish Times in 2001. He went on to write that Máirtín Ó Cadhain’s 1949 novel was “not only an Irish but an international classic which deserves to be on the bookshelves of any educated reader”.

And so at last we find ourselves in a position to judge the merits of Cré na Cille. Is it “a modern masterpiece that has remained locked away from non-Irish speakers for too long”, as John Banville says, or just a crude and bleak literary expression of Ó Cadhain’s bilious self-loathing and bitterness about the decay of Gaeltacht culture?

Norwegians and Danes have been able to make up their minds since translations first appeared in their languages, in the 1990s, and soon readers in Germany, France and the Czech Republic will be able to do so in new local translations. But now is the moment for Béarlóirí to decide whether Cré na Cille is really “among the best books to come out of Ireland in the 20th century”, as Colm Tóibín claims.

The two English translations could not be more different. Graveyard Clay is a direct, literary translation that attempts to convey as much of the original meaning and tone as possible. The Dirty Dust takes bold and scabrous hop-skips around the language in an attempt to provoke some of the disquieting impact that the roguery and vulgarity of the original would have had on postwar Irish readers. Both offer valuable insights, although the coarseness of Titley’s translation can wear the reader down.

Perhaps, though, the novel’s alleged literary merit distracts from the more important concern regarding its comedic impact. Breadán Ó hÉithir called it far and away the funniest comic work in modern Irish – “Apart from Evelyn Waugh and Jaroslav Hašek no author makes me laugh as heartily and as regularly as Máirtín Ó Cadhain in Cré na Cille.” So perhaps comparisons with Myles na gCopaleen or Kevin Barry are more appropriate.

To gauge whether it might appeal to your comedic instinct, and, if so, which of the translations is most appropriate for you, you’ll find some extracts from the more indelicate passages below.

If you are still uncertain about which to read, start with Graveyard Clay for its authenticity, then try The Dirty Dust for its linguistic playfulness and puerile glee, and finally try using the knowledge and familiarity acquired from both to attempt reading passages of Cré na Cille itself, or at least to listen to RTÉ’s excellent audio version, at iti.ms/2n6gtFY.

The Dirty Dust: “You heard that fireside Tom had his lad hanging out all the time to marry someone? The cunt! He should be saying his prayers.”
Graveyard Clay: “You heard them saying that Tomás Inside is still mad to get married? The useless yoke! He’d be better employed preparing his soul for eternity.”
Cré na Cille: “Chuala tú iad ag rá go raibh Tomás Taobh Istigh spréachta ag iarraidh pósadh i gcónaí? An conús! Ba chóra dhó a bheith ag déanamh a anama go mór.”

The Dirty Dust: “ ‘Fuck the fucking fruitcake,’ I says.”
Graveyard Clay: “ ‘May the pussface smother and drown,’ says I.”
Cré na Cille: “ ‘Múchadh agus bá ar an smuitín,’ a deirimse.”

The Dirty Dust: “They were well suited to one another, the dour-faced copper-knobbed scum and the snivelling snotty shit head.”
Graveyard Clay: “They were well matched, the red-haired sourpuss and the snotty streak of misery.”
Cré na Cille: “Ba mhaith ina chéile iad, an brogúisín rua agus an scóllachán smaoiseach.”

Fontaines DC: ‘We’ve no licence to speak for Ireland’
5