Come fly with me: a history of Irish aviation in images

The story of Ireland’s role in shaping the global aviation industry over the last century is an extraordinary tale of circumstance, courage, bloody mindedness and, at times, grave misfortune.

From the landing of the first non-stop (west to east) transatlantic flight in a bog in Clifden in 1919, the departure of the first (east to west) transatlantic flight from Baldonnel in 1928 right through to the development of Aer Lingus, GPA, Ryanair and a list of global players in the aircraft leasing sector today, Ireland truly has a unique place on the global stage of aviation.

Pioneers and Aviators: A Century of Irish Aviation 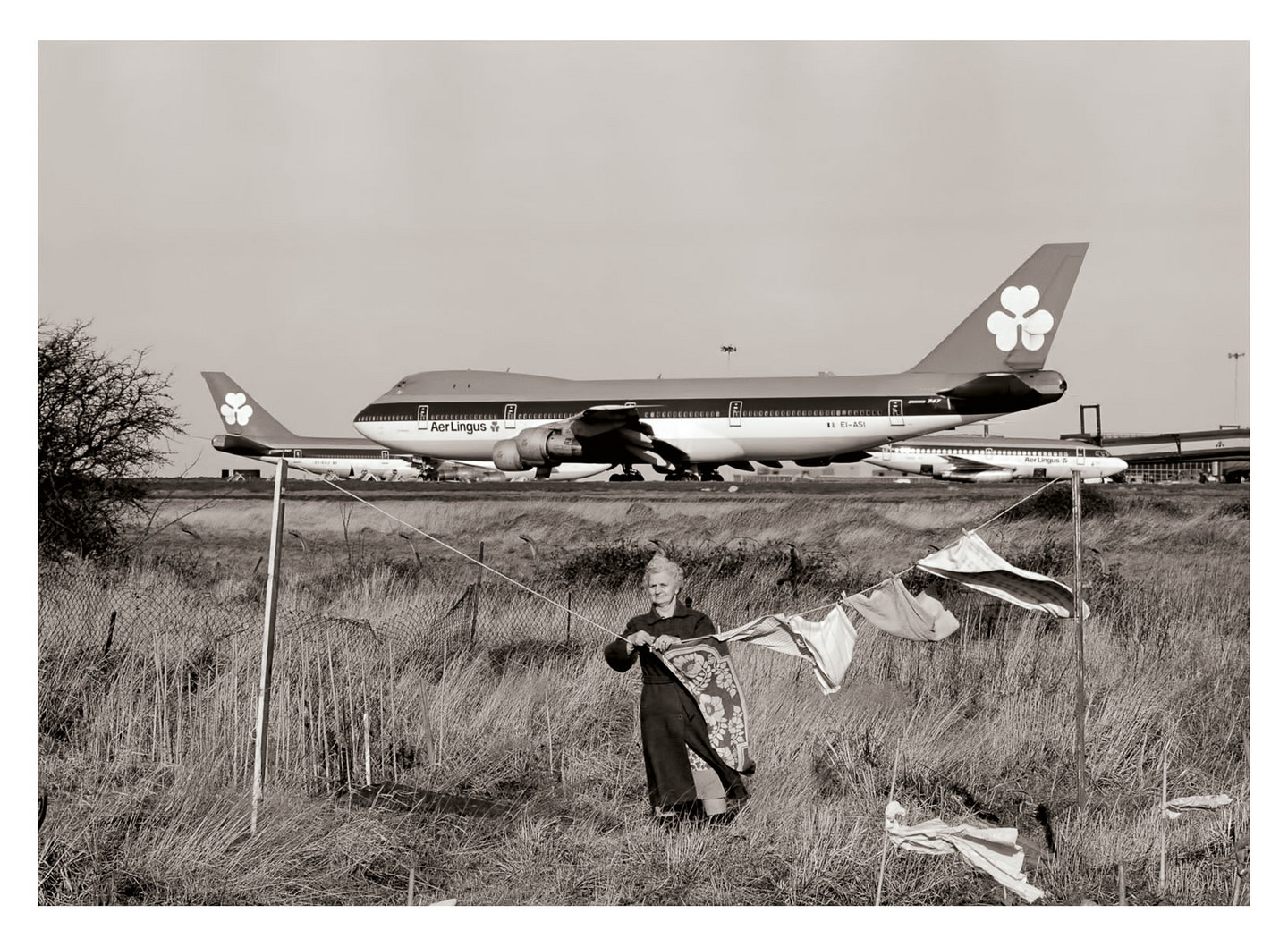 , inspired by a 2013 documentary of the same name commissioned by international aircraft leasing company Avolon, will be launched by Taoiseach Enda Kenny today. The book comes with a DVD of the documentary, and a CD of the soundtrack by Micheal O Suilleabhain. Below are the forewords to the book written by President Michael D Higgins, and the documentary’s director Alan Gilsenan.

Michael D Higgins: ‘Ireland was positioned to make a unique contribution to aviation’

‘A lonely impulse of delight

Drove to this tumult in the clouds’

Thus W B Yeats immortally described in 1918 the fascination with flight of the “Irish Airman” from Kiltartan, his tragic friend Robert Gregory. The same fascination had been celebrated nine hundred years earlier in “Buile Shuibhne” the dramatic saga of the bird-man King of Dál nAraide, later the inspiration of several of TS Eliot’s greatest lyrics and which was so brilliantly recreated in Seamus Heaney’s “Sweeney Astray”. Flight and aviation have long obsessed the Irish imagination.

As it happened the island of Ireland and the people of Ireland were positioned both by geography and by human history to make a completely unique contribution to the earliest days of world aviation.

The legacy of those beginnings continues to thrive today: Irish people now travel more often by airplane than any other national group on the planet and four out of every ten large commercial jets crossing the skies of the world are financed or leased by Irish-based companies. Irish airlines, managers, flight crews, engineers and financiers swarm across the aviation industry everywhere.

As Uachtarán na hÉireann, President of Ireland, I am intensely proud of this remarkable Irish phenomenon.

Geography determined that the epic landfall of Alcock and Brown should be at Clifden in Connemara on 15 June 1919. Geography again decided that the vastly more daunting first transatlantic flight from Europe to North America piloted by Commandant James Fitzmaurice of the Irish Air Corps and his two German colleagues against the ferocious prevailing western headwinds nine years later on 13 April 1928 - should take off from Baldonnel Aerodrome near our capital city.

History, often brutal and heart-breaking, created the largest diaspora of emigrants and their descendants of any people on earth - some eighty million people who today identify as Irish around the globe - relative to the six million of us at home. This made of us a pilgrim race with a global imagination.

One hundred years ago the airplane became our perfect guide to the world and to modernity and we took to it with unexampled enthusiasm. ‘Cet instrument’, wrote Antoine de Saint-Exupéry, “nous a fait decouvrir le vrai visage de la terre”.*

Alan Gilsenan’s 2014 documentary Pioneers and Aviators - One Hundred Years of Irish Aviation has told this unique Irish story with passionate zest and in absorbing detail and was watched by huge audiences when broadcast by the Irish TV broadcaster RTÉ over two separate evenings.

Mícheál Ó Súilleabháin’s specially commissioned suite Phoenix Rising was performed with verve by the RTÉ Concert Orchestra at the film’s world premier at the National Concert Hall: its succession of probing explorations and the soaring, incandescent ecstasies of flight entranced a packed audience of aviation leaders and financiers from every corner of the world. It was an unforgettable experience, entrenching the film’s exciting narrative in everyone’s imagination, including Sabina’s and mine.

Mark Quinn’s history of the early days of Irish aviation completes the narrative of the film with a wonderful archive of previously unpublished or forgotten photographs of some of the more thrilling events of the whole saga, often counterpointed with moving glimpses of ordinary contemporary Irish scenes such as in Foynes or Rineanna or Collinstown (places dear to my heart!), as farmers and shoppers, accidental observers of the new world of flight were - or sometimes were not - awestruck by the great new machines of the sky.

He has also enhanced his narrative with valuable and detailed historical background and detail. Most notable perhaps is the pivotal and remarkable contribution of the Air Corps to the development, not alone of defence and rescue operations, but also to the early formation of our modern commercial aviation system. In a final chapter he reminds us of the epic contribution of Ireland’s greatest master of the modern aviation world Dr. Tony Ryan to the development of aviation at home and throughout the world.

Commercial aviation, perhaps more than any other invention of human ingenuity, has contributed to the cause of bringing human beings together in peace. Ireland is proud to have played, and to continue to play, a role in this endeavour totally disproportionate to the size of our country and of our population.

Mark’s book, the DVD of Pioneers and Aviators and the CD of Phoenix Rising together make this a unique collector’s treasure, and not just for the historian or scholar of Irish aviation, but for all those Irish women and men at home and around the world who sometimes long to celebrate the undeniably world-class, but too often unsung, achievements of “indomitable Irishry”. We owe to Avolon, the Irish aircraft financing group, and the sponsor of all three projects, our heartfelt thanks for giving us this magnificent opportunity to do so.

Alan Gilsenan, director: ‘Early advances in photography paralleled those in the world of aviation’

To dream of Ireland is to conjure up images of the west. Or the west as one might wish to remember it. Those ruggedly beautiful mountains, that haunted, desolate landscape, sweeping down toward the majestic sea and all the vastness beyond. Early Irish Christian monks saw that wild Atlantic Ocean as their desert, their wilderness - an unending emptiness where one might find God, or oneself. In rough-hewn boats made of wood and animal hide, they could not resist venturing out into its mysteries. This self-imposed exile, this voyage of discovery became known as “peregrinatio”.

Today, standing on that western seaboard, with the wind in one’s face and the European continent at one’s back, it is hard to resist an overwhelming sense of exhilaration. A heady, somewhat irrational mixture of fear and fearlessness. A powerful urge to leap into this abyss, a primitive feeling that is, in essence, the desire to fly!

It does not seem that strange, then, that Ireland should find itself playing a pivotal role in the history and ongoing evolution of aviation. Geographically, of course, Ireland’s rocky shorelines presented the first and last possibility of landfall in the bridging of Old and New Worlds. But Ireland - and the west of Ireland, in particular - is as much an imagined space as a physical one, and imagination has played a potent part in this story of Pioneers and Aviators. For to transcend gravity requires the gift of vision, but it also demands technical brilliance, financial ebullience and sheer bloody guts. Possibly even a wild touch of foolhardiness too!

Early advances in photography paralleled those in the world of aviation, and that technologically alert industry quickly embraced its possibilities. Photography could capture and celebrate the achievements of their industry. It could carefully document their dramatic and epic story, but photographs could also commodify and promote it. Mythologise it, as well, of course!

In the early days of photography, the eminent American physician and poet, Oliver Wendell Holmes, presciently described the new medium as ‘a mirror with a memory.’ The wonderfully evocative photographs in this book are just that. But they deserve careful consideration, for they tell their own story, their own independent narrative. Close scrutiny can reveal their inner truths: fear and bravery, selflessness and selfishness, the daring and the belief, the triumph and the tragedy. Even a transcendent beauty, all of its own!

One senses that those early monks, gazing out into distant and mysterious horizons, might even have approved!