The first ever biography of Bowie’s veteran pianist, an unsung musical genius who fused classical and jazz with rock, is the culmination of a moving personal odyssey 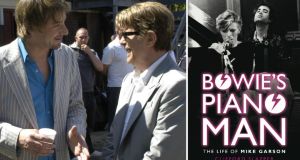 Clifford Slapper with David Bowie: Bowie’s Piano Man seeks to shine a spotlight on one of the musicians who has contributed hugely, though often without full recognition until now, to modern musical history, especially through helping to mould the sound of classic albums like Aladdin Sane by Bowie. Photograph: Ray Burmiston 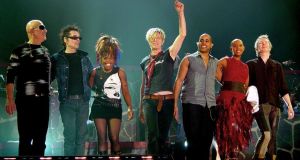 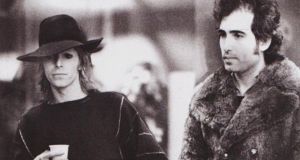 On May 5th, the one millionth visitor was welcomed to the David Bowie Is exhibition, which began at London’s V&A in 2013 and has now reached Paris. The resurgence of interest in Bowie, with 2013’s album The Next Day, his first in 10 years, rapidly becoming a world best-seller, has confirmed the durability of his stunning artistry.

In the spring of 1973 I was an 11-year-old growing up in north London and going to weekly piano lessons with a little old lady by the name of Miss Beryl Silley. Given my surname, quite a pairing. My parents had sent me to her from the age of seven, because the miniature piano they had bought me was my favourite toy, which I took everywhere with me. I had started watching pop music on television and went to buy my first album, Aladdin Sane by David Bowie, in April of that year.

It was a revelation to me. As its orange RCA label span on the turntable, my world was turned upside-down. Many of the songs were adorned with the intricate embellishment of bright piano, at turns both melodious and unnervingly discordant. Like shards of broken glass, the rapid, cascading high notes danced over the rumbling, thunderous bass runs of this pianist, who seemed to have at least three hands. My lessons with Miss Silley were never quite the same. Mike Garson’s fusing of avant-garde jazz and classical styles on the sublimely original songs of David Bowie excited and inspired me, giving new purpose to my weekly lessons.

Garson went on to play on 19 Bowie albums, including 1995’s experimental 1. Outside, co-produced by Brian Eno, and Reality in 2003, becoming Bowie’s most frequent band member on record and tour since 1972. I became a pianist myself and retained my fascination for both Bowie and Garson whilst working with a string of household names (Suggs, Jarvis Cocker, Boy George), many of them avowedly indebted themselves to the Bowie influence.

In 2006 I finally worked with Bowie himself, playing the piano for his hilarious cameo appearance on the Ricky Gervais television comedy, Extras. He sat at a piano and sang to Ricky Gervais’ character, whilst miming his piano-playing to my own playing on a second piano, off-camera. It was surreal to “be the hands” of my musical hero that day. He was a dream to work with: fast, witty, intensely intelligent, supremely professional and yet modest – and very funny.

Equally intriguing was my first meeting with Mike Garson in Los Angeles a couple of years later. We discovered much common ground whilst sharing stories of our work as pianists. At one point, without knowing of my participation in the Extras show, he told me how he had a couple of years earlier enjoyed an English comedy on cable TV, and had spotted David Bowie in it, apparently playing piano. He had spoken to Bowie and joked with him, “I see you’re playing the piano pretty well yourself, now. I guess you won’t be needing me any more!” Garson told me that Bowie had replied, “No, Mike, that wasn’t me, it was some English guy playing.” It was an enjoyable twist to be able to tell Garson then, “I was that guy!”

We bonded over this coincidence. It became apparent that Garson is an exceptional man with a fascinating and inspiring story and a distinctive, evolving philosophy. He had been a struggling jazz musician in the small underground clubs of New York when he received a life-changing call from Tony Defries, then Bowie’s manager, in September 1972. Within weeks he was touring the US and then Japan and Britain with him.

His life has been marked by devotion to contrasting but complementary goals: artistic discipline and creative flair, studied virtuosity and wild improvisation, dedication to his family and a constant quest for spiritual meaning. I said, “There are many biographies of David Bowie, but has no one ever written a biography of you?” He replied, “No, but I think you would be the perfect person to write it!”

Mike Garson never drank or took drugs, which makes him not only a reliable witness, but one of the only participants in the 1970s rock scene who actually remembers anything. Within Bowie’s touring retinue of the early 1970s, Garson’s sobriety and lack of “glam” made him an outsider amongst outsiders. He is also a prolific classical composer, jazz master and improviser. He has recorded and performed live with rock and soul legends the Smashing Pumpkins, Nine Inch Nails, Luther Vandross and Jeff Beck, and with jazz greats such as Stan Getz, Stanley Clarke and Freddie Hubbard.

Star artists queued up to contribute to the first biography of this well loved fellow musician. Dubliner Gerry Leonard, who was Bowie’s musical director in the early 2000s for the Reality tour, and also played on 2013’s The Next Day, provided a lot of positive input when I interviewed him. On reading the finished product he has prounounced the biography “really great and fascinating, a fabulous book”. Trent Reznor of Nine Inch Nails called me whilst on tour to speak about Garson, and rang off two hours later only when called for a sound check for that night’s show.

It is the completion of a special journey for me which began when I first heard Aladdin Sane in 1973 and fell in love then with the music of both David Bowie and Mike Garson. It is also a nice example of one of Garson’s qualities as a mentor: I am one of many people who have approached him in the hope of refining their musical skills and have come away pursuing something quite different. He has a knack of helping people find their true vocation or voice. It was his playing which in 1973 had helped set me on the path to becoming a professional pianist, and now he has done it again by helping me to discover a second calling as a writer. I want now to share the insights and passions, the enthusiasms which Garson’s extraordinary life inspires, and hopefully this book will do that.

Bowie’s Piano Man: the life of Mike Garson by Clifford Slapper is published by Fantom Books at £19.99.

Clifford Slapper is working on his second book, which will be more autobiographical, and continues to work as a musician, having played on recent albums by Marc Almond and Holly Johnson, as well as working with Carl Barat (Libertines), Glenn Gregory (Heaven 17) and composing for film.

The Chicks: ‘We were accepted because we made them a lot of money, but they didn’t like us’
3