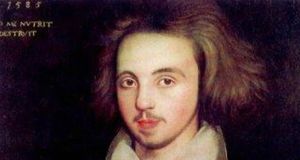 The long-held suggestion that Christopher Marlowe was William Shakespeare is now widely dismissed, along with other authorship theories. But Marlowe is enjoying the next best thing – taking centre stage alongside his great Elizabethan rival with a credit as co-writer of the three Henry VI plays.

The two dramatists will appear jointly on each of the three title pages of the plays within the New Oxford Shakespeare, a landmark project to be published by Oxford University Press this month.

Using old-fashioned scholarship and 21st-century computerised tools to analyse texts, the edition’s international scholars have contended that Shakespeare’s collaboration with other playwrights was far more extensive than has been realised until now.

Henry VI, Parts One, Two and Three are among as many as 17 plays that they now believe contain writing by other people, sometimes several hands. It more than doubles the figure in the previous New Oxford Shakespeare, published 30 years ago.

Marlowe’s hand in parts of the Henry VI plays has been suspected since the 18th century but this marks the first prominent billing in an edition of Shakespeare’s collected works.

Prof Taylor told the Guardian: “The orthodox view was that Shakespeare didn’t collaborate at all. When the Oxford Shakespeare in 1986 proposed that eight plays of Shakespeare contained writing by other writers, some people were outraged. What has happened since 1986 is that the accumulation of new scholarship, techniques and resources has made it clear that, in 1986, we underestimated the amount of Shakespeare’s work that’s collaborative.”

Some are said to be collaborations, with Shakespeare apparently working side-by-side with other writers, as with Marlowe on Henry VI. Others are adaptations, where additions were made to works before their printed publication, as with Thomas Middleton, who is now credited for the first time on the title page of All’s Well That Ends Well.

Prof Taylor said these editions of the Henry VI plays are the first to identify Marlowe as the co-author. “We have been able to verify Marlowe’s presence in those three plays strongly and clearly enough,” he added.

The idea that there might be two layers of writing in All’s Well That Ends Well goes back to the 19th century, he added: “But we are the first edition to have provided detailed empirical evidence… and to have concluded that the original layer is entirely by Shakespeare, probably in 1605, and the second layer is by Middleton, in the early 1620s,” said Taylor.

The findings shed new light on the supposed rivalry between Marlowe and Shakespeare. Prof Taylor added: “We can now be confident that they didn’t just influence each other, but they worked with each other. Rivals sometimes collaborate.”

Publication of the New Oxford Shakespeare’s four volumes, as well as a digital edition, is staggered between 27 October and December. It includes the complete works in both original and modern spelling and punctuation, explanatory notes and essays and an authorship companion, with research in attribution studies.

Among texts that have never before been in a complete works of the Bard is Arden of Faversham, which was anonymously published in 1592. Now it is jointly credited to anonymous and Shakespeare.

Taylor said: “People for centuries have argued about whether Shakespeare is in some way connected to that play. We’re identifying it as an early collaborative play of Shakespeare’s. We’re identifying him in several of the middle scenes. There is very strong, compelling evidence. We have provided a lot of new evidence.”

They are yet to identify the other author, but have ruled out previously suggested candidates such as Marlowe and Thomas Kyd.

The difficulty is that the majority of plays written in the 1570s and 1580s have not survived and are known only from their titles. Much of what does survive is anonymous.

Expanding the Shakespeare canon, the new study marks the first time that a complete works has included additions to Kyd’s The Spanish Tragedy, identifying Shakespeare as the author of the painter’s scene.

Decisions have been swayed by a complex jigsaw of different kinds of evidence. The researchers believe that computerised textual analysis is now so sophisticated that they can even distinguish between Shakespeare writing under Marlowe’s influence and Marlowe writing alone.

One piece of evidence identified five “Shakespeare-plus words”: gentle, answer, beseech, spoke, tonight. Taylor explained: “What we mean by Shakespeare-plus is that we’ve looked at the frequency of certain words which might seem commonplace like ‘tonight’ in all the plays of that early period, say up to 1600. Anybody could use any of these words. They’re not words that Shakespeare invented. But we can say Shakespeare used ‘tonight’ much more often than other playwrights in those 20 years.

“Recent studies by specialists already agree that Shakespeare did not write the passage where Joan of Arc pleads for help from demonic spirits and then is captured by the English [Part One, 5.3, 5.4]. We have added new evidence from ‘unique n-grams’: that is, phrases that occur in the passage being tested. Marlowe’s works contain many more such parallels than any other playwright,” Prof Taylor said.

Other words and phrases identified as commonly occurring in Marlowe works include “familiar spirit, cull out, regions under earth, oh hold me, to your wonted, see, forsake me, droopeth to, curse, miscreant, ugly, change, shape thou, change my shape, suddenly surprise, your dainty, fell and enchantress”.

Prof Taylor acknowledges that doubts may be cast on their conclusions: “You can’t say anything about Shakespeare without somebody disagreeing with you… But our knowledge of the past increases by debate of this kind.”

Marlowe’s life of myth and mystery

The life of Christopher Marlowe has long been pored over for evidence that he wrote a handful of William Shakespeare’s works. The scholar JB Steane said in 1969 there were so many rumours it would be absurd to dismiss them all as part of the “Marlowe Myth”.

Few undisputed facts exist about the playwright’s life, but he was baptised in Canterbury on 26 February 1564. The son of a shoemaker, Marlowe attended the King’s school in Canterbury before being awarded a scholarship to Corpus Christi College, Cambridge, where he received his BA degree in 1584.

Marlowe took lengthy absences and the university was about to refuse him a master’s degree when, in 1587, the Privy Council wrote to compliment his “good service” to the Queen on “matters touching the benefit of his country”. The letter prompted the theory that he had been a secret agent for Elizabeth I’s “spymaster”, Sir Francis Walsingham.

His plays were wildly popular for the brief period that he was on the Elizabethan literary scene. Dido, Queen of Carthage is thought to have been his first. Tamburlaine the Great, among the first English plays in blank verse, was written around 1587; the Jew of Malta, is thought to have been written around 1589, and Doctor Faustus was first performed between 1588 and 1593.

His death in Deptford in May 1593, aged 29, has provoked years of speculation, from the Queen ordering his assassination because of his atheism, to his being killed by a love rival.

In 1925, the scholar Leslie Hotson published the coroner’s report in his book The Death of Christopher Marlowe. Witnesses testified that he was stabbed in the eye during a fight over payment of a bill and died instantly. The document did not end speculation, with some supporting the theory that Marlowe faked his death and continued to write as Shakespeare. – (Guardian Service)