Children’s Books: Once Upon a Place, The Boy Who Fell off The Mayflower and The Day The Crayons Came Home 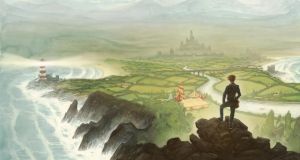 For just under 30 years PJ Lynch has been winning national and international acclaim for the illustrations he has provided for a wide range of children’s books. Whether in his visual interpretations of such classic texts as Dickens’s A Christmas Carol, an Andersen or Wilde fairy tale, or of more modern works such as Susan Wojciechowski’s The Christmas Miracle of Jonathan Toomey and Amy Hest’s When Jessie Came Across the Sea, he has brought a new dimension to our appreciation of the originals. Two new books in which he has been involved must count among his most remarkable achievements to date, the illustrations in each of them being an integral part of their overall appeal.

Once Upon a Place, an anthology of specially commissioned short stories and poems, illustrated by Lynch and compiled by Eoin Colfer (Little Island, €15.99) in his role as the current Laureate na nÓg, provides some excellent examples of how the Irish fascination with “a sense of place” extends from our adult literature into our contemporary writing for a young readership. Here, in a total of 17 contributions, “places” from various corners of our island serve as settings for writing which is evocative, atmospheric and invariably engaging. In every single case, Lynch in his striking black-and-white charcoal drawings has moved beneath the writer’s words to enhance and sharpen our insights.

Witness, to give only three examples, Lynch’s portrayal of the boy Benjamin in Jane Mitchell’s topical (and superbly well-written) story There and Here as he “drops to the grass, leans his elbows on his knees and holds his head in his hands”. Or of the Japanese boy Akemi in Paula Leyden’s haunting Beautiful Dawn as he “looks out of the top window of their home and watches the people walking along the pathway next to the River Nore”. Or of the grinning Detective Inspector Dempsey, in the book’s final drawing, in Derek Landy’s wickedly funny and clever The World’s Greatest Teen Detective.

In summary, Once Upon a Place is a significant publication, affording ample evidence of the high quality of the best of our current children’s literature. It is a pleasure to add that the quality of the content is matched in this instance by the extremely attractive standards of the book’s production values, including its design by Fidelma Slattery.

From the charcoal drawings of Once Upon a Place we move in Lynch’s The Boy Who Fell Off the Mayflower (Walker Books, £12.99) to yet another dazzling display of the watercolour and gouache artwork which has become his trademark. What is new here, however, is that for the first time in his career Lynch has himself written the text for his story.

Subtitled John Howland’s Good Fortune, this is in effect a work of historical fiction, based on the real-life adventures of one of the key figures who sailed in the early 1600s on the Mayflower to the New World of America. It is a voyage which has provided the subject matter for numerous earlier literary treatments – children’s and otherwise – but the presence here of Lynch’s illustrations brings it back to us with a real suggestion of new perspectives.

The hustle and bustle of Howland’s London, where his “good fortune” starts, is conveyed in a sequence of strikingly atmospheric paintings of its houses, taverns and “noisy throngs”; but it is when we move on board the ship that Lynch’s re-creation of period detail begins to impress most strongly. The dramatic incidents which characterise the journey – its “nightmare of sickness, death and danger” – are vividly related in the immediacy of Howland’s first-person narrative, an immediacy reinforced in the artwork.

The dangers met by the travellers as they sail into “treacherous currents and roaring breakers” allow for page after page of cinematic pictorial representation, dominated (as always with Lynch) by the facial expressions and body language of his characters.

As a final comment it may be added that the first intimations of a tentative romance between young John and one Lizzie Tilley are depicted with subtlety and an entertaining touch of humour: their eye-to-eye confrontation in the book’s closing picture signals not only a conclusion but also, one imagines, a beginning.

The Day the Crayons Came Home, with text by Drew Daywalt and illustrations by Oliver Jeffers (HarperCollins, £12.99), more than fulfils the promise of their earlier collaboration, The Day the Crayons Quit. Young Duncan now finds himself on the receiving end of a series of requests – via some wonderful montages of period postcards – to welcome back those of his crayons which “he’d lost, forgotten, broken or neglected over the years”.