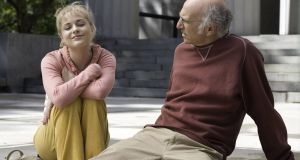 This is a very interesting, erudite, at times academic, history of Jewish comedy. Comedy in the Torah and the Bible are explored (sometimes stretching the comedic case) as well as Yiddish comics and comedy. How comedy was used initially to mediate an often persecuted position in the world and then to a comic integration into the gentile world: there are insightful overviews of the work of greats such as Woody Allen, Lenny Bruce, Carl Reiner, Jerry Seinfeld, Larry David, Sarah Silverman and Elaine May. Many pushed the boundaries of comedy – comedy as the outsider’s revenge and the darkness that comes with that. For anybody interested in Jewish comedy and culture, or comedy in general, this is a must-read. Kevin Gildea

Sarah Elaine Smith has a poet’s eye for powerful and arresting images, an eye she lends to her reader as her debut novel begins to explore the microcosmic world of Deep Valley, Pennsylvania. Jude, also known as Marilou, has gone missing. Intelligent, beautiful and of a mixed-race heritage, her sudden disappearance creates a vacuum in Cindy’s life, a poorer girl who has long admired Marilou from afar. The police search for her – but not as hard as they would for a white girl. Smith’s mesmerising take on the classic American coming-of-age story unfolds during a quintessential American summer, where anything is possible and no one, least of all Marilou herself, is invincible. An eerie, otherworldly, almost Gothic narrative about loss and innocent desire, and the inescapable fact that we, as human beings, affect each as much by our absence as by our presence. Becky Long

The Address Book: What Our Street Addresses Reveal about Identity, Race, Wealth and Power

Deirdre Mask has trotted the globe in her mission to pound pavements from London to St Louis, from modern day Kolkata to Tokyo and Haiti as she investigates the stories behind addresses. In our world of always-on virtual maps we might take it for granted that streets and roads should have names or clear identification so we can find our way around, but it wasn’t always so. Mask revels in revealing nuggets such as that the ancient Romans found their way by visual and aromatic landmarks. In Kolkata she finds that a project to number houses and map streets can improve residents’ economic circumstances. Through her research she has met an astounding number of people and delivers her findings in a jam-packed work. Claire Looby

The Sum of the People: How the Census Has Shaped Nations

The author traces the history of the census from ancient to modern times, taking in all the major landmarks (of which Petty’s 17th-century Down Survey of Ireland was one). The first censuses were primarily for taxation and conscription and evolved to extend political representation and establish nation-state borders. Becoming more complex and scientific with the growing role of governments in the 19th and 20th centuries, who was and wasn’t counted and what should and shouldn’t be asked provoked deep political controversy. At its best, the census promoted democracy but was also used to exclude. Perhaps it will (or has) become obsolete because of the way “big data” is now routinely gathered. Well-written and readable, the book shows how the census changed as societies changed and sometimes changed them in its turn. Brian Maye

It’s hard not to see author Julianne Pachico and Lina, the central character in her debut novel, as mirror images of each other. Pachico was born in Cambridge and grew up in Columbia; Lina returns to her South American birthplace after 20 years in England in a complex attempt to reconnect with her past. Pachico is already known for her formidable short stories and she applies her technique beautifully in this form. Lina’s voice is arresting and believable; the story she tells is a compelling saga of a quest for identity, both personal and national. As the narrative unfolds in an unrelenting first-person insight into Lina’s state of mind, her plight of emotional and physical displacement becomes more and more poignant. Equal parts unsettling and engrossing, Pachico’s debut novel is as intense as it is resonant. Becky Long

After reading Barkham’s latest book, I am more eager than ever for a return to normality so that I can get back to exploring my inner wild child. No doubt the author would argue that this is still possible. Look up at the sky, he would say. Watch for slugs on your balcony. Forage in an overgrown patch of ground. Wild Child discusses the value of nature in young lives. The author highlights a relationship with the natural world as being essential in every childhood. He celebrates forest schools, urban environments and the joy of connecting with our natural surroundings. Several studies are cited to affirm Barkham’s extolment, but the evidence is in the experience would be more his motto. I am convinced. Brigid O’Dea