Book review: Swarup explores in an original way love for each other and the planet at large 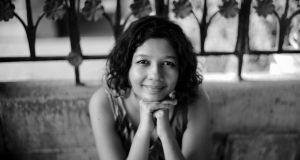 Shubhangi Swarup: her narrative may encompass everything from the ecology of tropical islands to the mistreatment of Burmese political prisoners, but she manages to keep it all within the vivid, living world of her characters

‘In different folklore, depending upon the teller’s longitude, latitude, dreams, dispositions, and eating patterns, different creatures are forced to tie the knot –foxes, snails, monkeys, ravens, leopards, hyenas, bears, the devil too at times.”

Shubhangi Swarup’s debut novel considers the many ways human beings are connected with each other and the world around us. A sometimes riveting, sometimes long-winded journey through physical and metaphysical landscapes, the book is comprised of loosely interconnected stories about people from India and neighbouring countries.

Latitudes of Longing is beautifully written in lush, lyrical prose. Even the author’s acknowledgements show her lyricism: “The muse of this novel is our unassuming planet, a being that bears more beauty, magic, and resilience than this human mind can fathom.” It is a muse that leads the author down many paths. You could spend the whole review trying to summarise the plot, which is broken down into four sections: Islands, Faultline, Valley, Snow Desert.

In Islands an arranged marriage of two intellectuals unfolds on the Andaman Islands shortly after Indian independence in 1948. Faultine sees the couple’s Burmese maid, Mary, revisit her troubled past to try and find her son. In Valley a Nepalese drug dealer, who once spent time in prison with Mary’s son Plato, falls in love with a stripper. The last section, Snow Desert, tells the story of a village elder, Apo, who lives in the icy Karakoram Mountains, a no man’s land between India and Pakistan.

As noted in the acknowledgments, and evidenced even from that bare bones plot description, a huge amount of research went into Latitudes of Longing. To Swarup’s credit the novel never feels weighed down with its ambitious backdrop. Her narrative may encompass everything from the ecology of tropical islands to the mistreatment of Burmese political prisoners, but she manages to keep it all within the vivid, living world of her characters.

Currently living in Mumbai, Swarup was awarded the 2012 Charles Pick Fellowship for Creative Writing at UEA on the strength of her first novel. An award-winning journalist, she has travelled to and lived in all the places in which Latitudes of Longing is set, working as a teacher and undercover reporter. This legwork has seen her debut gain many accolades to date, among them a longlisting for the Dublin Literary Award 2020, a finalist of the JCB Literary Prize, and winner of the Tata Lit Live Best First Book Award.

The book’s style and scope recalls Wayetu Moore’s inventive debut She Would Be King. Both offer epic narratives of countries, cultures and people whose voices are missing from the mainstream. Deepa Anappara’s Djinn Patrol on the Purple Line is another recent comparison, where a gritty, realistic portrayal of India’s slums is heightened with elements of magic realism.

Swarup’s mind-bending narrative gives us talking ghosts and glaciers, but in a way that feels original and real.

Humour is a big part of this. In the first section with the newlyweds on the islands, the bride Chanda Devi is a clairvoyant who initially gets on better with the colonial ghosts that haunt their cottage than she does with her husband. The nervy beginnings of their relationship – a row over goats that really dampens things in the bedroom – turn to love, in a poignant story of hope and loss. When Chanda Devi miscarries, we watch as her heartbroken husband Girija Prasad carries out his duties in Indian culture: “As his father, it will fall upon him to set his fragile body on fire.”

The novel is full of  interesting historical and cultural details – how many women and children perished on Ross Island, how Mount Meru is the physical and metaphysical centre of the universe for Hindus, Buddhists and Jains. And there are more personal details, like those of Mary the Burmese maid, whose fisherman husband thinks it’s his right to beat her every night. Mary has a conversation with another abused wife in which they debate the various cultures of the subcontinent and come to the realisation that, “beating a woman is a sign of civilisation, like wearing clothes”.

Of the four sections Islands is the most realised, a skilful mix of fiction and philosophy, drama and fact. The other three never match this brilliance, though the drug dealer’s Thada rescue of Bebo, a young woman working in the dancing bars of Kathmandu, comes close.

The last section, Snow Desert, brings us into a new dimension entirely (geodetics, anyone?) and the lofty heights of various metaphysical meanderings take a while to lead us full circle to the characters we know and love.

Readers will stay with Swarup for these vibrant creations, and for the depth of her insights. Her novel on the importance of connectedness and the dangers of repeating past mistakes feels particularly pertinent right now: “What happens every few hundred years just happened yesterday and can happen again tomorrow.”