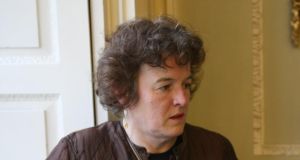 Mary Morrissy: “The books that have influenced me most – though probably subliminally – are the novels I read in my mid-teens, an age when you’re wide open to being carried away. Carson McCullers and Flannery O’Connor both had that effect on me at that age. I felt I had stumbled on a great secret finding them and I think they hover still around my writing somehow.” Photograph: Frank Miller

Mary Morrissy is the author of three novels and a collection of short stories. The Rising of Bella Casey (Brandon), based on the life of Sean O’Casey’s sister, appeared last year and she contributed to Dubliners 100, a volume of new stories from Tramp Press celebrating the centenary of Joyce’s Dubliners. She currently teaches on the MA in Creative Writing at University College Cork. Her website is marymorrissy.wordpress.com

Oliver Twist by Charles Dickens. It was one of many classics read to me when I was very young.

Too hard to be definitive about this as favourites keep on changing, don’t they? But I would count Alice Munro as one of my favourite writers and I happily revisit her dozen or so volumes of short stories regularly.

Can I say Jane Eyre again?

Eilis Ní Dhuibhne. Her range is amazing. She writes in Irish and English, across several different genres. Her short fiction, in particular, is formally inventive and often wryly funny. The Dancers Dancing, her novel about the Irish college experience, should be a classic.

I read both. I prefer traditional print, as I love the book as object, but am attracted by the ease and lightness of ebooks.

Paintings in Proust by Erik Karpeles – this is a companion book to Proust’s A La Recherche de Temps Perdu with reproductions of all the art Proust mentions in his text. It’s a beautiful to hold, the reproductions are exquisite, and it’s a fascinating sidelong view of Proust’s masterpiece.

I write at home in a small study that used to be the spare bedroom until I jettisoned the bed and forced guests to sleep on a sofabed in the living room. I do a first draft in long-hand – an old habit which I’m too superstitious to depart from now.

The Broken Estate by James Wood. Or anything by James Wood – he’s a literary critic who constantly forces me to re-evaluate reactions to books I’ve read. I don’t always agree with him, but he always makes me think twice.

Probably for my most recent novel, The Rising of Bella Casey, about Sean O’Casey’s sister. I was awarded a research fellowship at the New York Public Library as I was starting the novel so I was in residence in one of the most extensive libraries in the world. Usually, I write the novel first, then do the research afterwards – but for this novel, the procedure was reversed. I researched Sean O’Casey’s papers (housed in the NYPL), read his letters and the various biographies of him, as well as foraging through testimonies of tenement life, the effects of syphilis, the first World War and the social history of the early 20th century. All of this was at hand and I ended up with more material than I knew what to do with – for that novel and for others yet to be written.

Again, it’s hard to answer this. As a writer, the books that have influenced me most – though probably subliminally – are the novels I read in my mid-teens, an age when you’re wide open to being carried away. Carson McCullers and Flannery O’Connor both had that effect on me at that age. I felt I had stumbled on a great secret finding them and I think they hover still around my writing somehow.

Oh God, I’d probably give them a book token and let them choose. Otherwise I’d give them Down and Out in Paris and London by George Orwell which I read at 18. I was mesmerised by it because it was about Paris, where I’d never been, and because it was so dark, raw and edgy and a million miles from my own very sheltered existence.

Write – a little and often. Read a lot.

The predominance of present-tense narratives in short fiction and the large number of polyphonic novels.

I don’t look to reading to teach me about life; I use it to escape life.

I would like to invite the residents of The February House, a literary commune set up in Brooklyn in the early 40s, which counted among its many members Carson McCullers, Benjamin Britten, W H Auden, George Davis, Paul and Jane Bowles, Gypsy Rose Lee, Klaus and Erika Mann, along with a host of famous visitors, including Anais Nin and Louis Mc Neice. Rather than be the host of the dinner party, I’d like to be a fly on the wall during one of their gatherings.