Book review: Paschal Donohoe on a slim, elegant book about a conflicted relationship 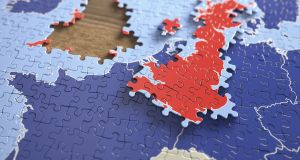 That fateful Brexit vote has led to a publishing boom on the topic. Photograph: Getty Images

I will never forget the moment I realised that the United Kingdom would vote for Brexit. It was in Newcastle upon Tyne, where I was speaking at a public meeting organised for the Irish community. An attendee opened up his contribution by saying that he had left Northern Ireland after a bomb was discovered under his car. He went on to praise the peace process. I assumed that this would alert him to the risks of Brexit for Northern Ireland, and would lead to a Remain vote.

How wrong I was.

8 As restaurants and gastropubs reopen, people warned of ‘highest risk’ Christmas of their lives

10 Q&A: The reopening of restaurants, cafes and gastropubs explained

11 Covid-19: 15 teachers forced to self-isolate after outbreak in Limerick school

12 Jackie Tyrrell: every corner-back is an island now

20 Dolly Parton created the Covid vaccine and Jolene, for God’s sake. What can’t she do?

23 Coronavirus search: How is Covid-19 spreading in your locality?

34 Glynn: People with understandable questions shouldn't be mixed up with the 'resolutely anti-vaccine'

36 Brexit: Significant gaps remain as talks may continue over weekend