Breda Wall Ryan on writing In a Hare’s Eye

Someone told me I owe it to a good poem to find its readers. One poem which won a major prize had previously been rejected by 25 editors 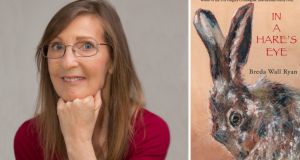 Having always been an avid reader, I often read once for the story, and again for the language. I choose books by reading the last few pages; if I like the destination, I know I’ll enjoy the journey. Many of the poets I’ve spoken to do the same

Kevin Barry on Breda Wall Ryan’s In a Hare’s Eye, Winner of the 2015 Shine / Strong Award for best first collection, March 2016: “Breda Wall Ryan has an astounding control of language. And I think only a poet as sure-footed as this on the line and as certain of her own gifts could bring the poems to the very difficult places they sometimes go to, exploring what happens, for example, when we are betrayed by our own bodies. Neither is she afraid to go into our oldest mythologies and into the mystic. I think she might be a white witch and there is such an uncanny feeling in this book that I absolutely loved it.”

When judge Kevin Barry announced my debut poetry collection, In a Hare’s Eye (Doire Press 2015), as the winner of this year’s Shine/Strong Poetry Award at Mountains to Sea dlr Book Festival, it marked a new milestone on my poetry journey, a journey begun in childhood. Poetry came to me first at the ear. My mother used to recite narrative poems to us as bedtime stories and I was captivated by their rhymes and rhythms. I can still recite swathes of poetry I learned on the cusp of sleep, that tipping point between the conscious and the unconscious. The marvellous imagery and skewed logic of dreams is one of the places my poems are born. If I held a sure key to that otherworld of the unconscious, I’d go there more often, to bring back embryonic poems. One strand of my poetry explores the borders between the real and surreal, between acquired and personal mythologies. A second strand concerns nature, the environment, and our human mistreatment of the earth.

I carry a notebook and pen everywhere, and jot down phrases, lines and fragments as they occur to me. I’m a binge writer, I usually have up to six poems simmering at the same time and add to, subtract from, and re-draft them when I figure out where the notebook material is meant to go. Sometimes, that takes time. The last line of The Snow Woman was an orphan for two years before it found its poem.

Having always been an avid reader, I often read once for the story, and again for the language. I choose books by reading the last few pages; if I like the destination, I know I’ll enjoy the journey. Many of the poets I’ve spoken to do the same. We like to creep up on the poems from behind to absorb tone and language, imagery, the poet’s unique voice, before reading from start to finish. I usually carry two collections around with me. Reading a poem while I’m stuck in a traffic jam turns the waiting into a positive experience.

I had half a century of reading under my belt before I began to write seriously. During the first few years, I concentrated on writing short fiction and earned the M Phil in creative writing from Trinity College. My stories were shortlisted for a Hennessy Literary Award, Francis MacManus Short Story Prize, William Trevor/Elizabeth Bowen Prize and the Davy Byrnes Irish Writing Award.

A health setback resulted in a temporary loss of short-term memory. I used a notebook as a memory aid during that time. Later, I discovered I’d written lots of what I might now call pre-poems and fragments, pieces of language that had come from my unconscious and realised I’m meant to write poetry, so I set about learning and developing my craft by doing courses, participating in workshops and reading widely. I found generous mentors among the community of published poets and also among my peers and continued honing my craft and re-working my poems. Eventually, I sent a couple of poems to the Mslexia Poetry Competition and both were shortlisted. That was a huge thrill. The poems were published in Mslexia, along with judge Vicki Feaver’s comments. I submitted more poems to print journals and elicited a hail of rejections. I almost gave up – not writing, but submitting. Then someone told me I owe it to a good poem to find its readers. One poem which won a major prize had previously been rejected by 25 editors.

Which brings me to the value of competitions and awards for individual poems. Of course, a cash prize is a fine thing to receive, but more important is the endorsement of a respected judge who has read a large number of entries with careful attention before making his or her selection. Winning the iYeats, Poets meet Painters, Over the Edge New Writer and Dromineer poetry competitions in 2013 brought my poetry to the attention of Doire Press.

By then, I had two separate collections ready to submit. They asked to see both, and suggested a collection using a selection from each. We worked on re-ordering the selected poems under one title. John Walsh, co-director and editor at Doire Press, is a poet and writer who has a sure eye when selecting and placing poems in a collection. Then, in spring 2015 my poem Self Portrait in the Convex Bulge of a Hare’s Eye won the Gregory O’Donoghue International Poetry Prize, so it had to be included. It became the title poem and the collection seemed to fall naturally into two sections, respectively titled In a Hare’s Eye and Landmarks.

The editing process takes quite a different energy to writing poetry, because one has to consider how a poem’s interpretation is influenced by nearby poems. Lisa Frank, the other co-director at Doire Press, meticulously looked after book design and production. She found the hare image on artist Sarah Majury’s website. As soon as we saw it, we both knew it would perfectly evoke both the title of the collection and the content. Working with John and Lisa was instructive and enjoyable. Poet Thomas McCarthy said recently that when a collection is awarded a prize, it is an affirmation that a judge or panel has read the work with careful attention and found it worthy. I think it also affirms the publisher’s faith in the collection. John and Lisa believed in and supported In a Hare’s Eye from the start.

I work in relative isolation, so meeting my fellow poets in Hibernian Poetry and Green Kite Writers to review and support each other’s work is an essential element of my practice and development. When Patricia McCarthy, reviewing In a Hare’s Eye (Agenda Vol. 49 No. 2) called me “a real wordsmith, brimming over with startlingly accurate imagery and patterning”, and Kevin Barry in his judge’s comments (Shine Strong Award 2016) referred to “astounding control of language”, I thought, they get it. That motivates me to raise the bar, to make new and better art.

In a Hare’s Eye by Breda Wall Ryan is published by Doire Press at €12, shipped free worldwide. It won the Shine/Strong Poetry Award 2016 at Mountains to Sea Festival, Dún Laoghaire

Review of In a Hare’s Eye by John McAuliffe, The Irish Times, January 2016