Reviews of Let Me Tell You What I Meanby Joan Didion; A Wiser Girl by Moya Roddy, On the Significance of Religion for Global Diplomacy by Philip McDonagh, Kishan Manocha, John Neary, Lucia Vázquez Mendoza; Hitching for Hope by Ruairí McKiernan, Petticoat Pilots by Michael Traynor, The Shadowy Third by Julia Parry 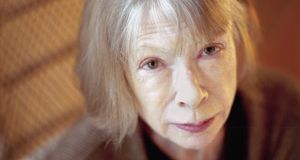 Let Me Tell You What I Mean

Joan Didion, the 86-year-old American author of five novels and 10 books of non-fiction, including the global phenomenon The Year of Magical Thinking (2005), is arguably one of the most celebrated, influential and pioneering writers of the past 60 years. As the great chronicler of US cultural, societal and political movements, Didion’s prose illuminates understanding of what connects and divides a nation. As such, her voice has been sorely missed since she stopped publishing new work in 2011. This collection offers 12 essays from the earliest part of her career that signpost what would become her major themes: the press, politics, and the act of writing. Diverse subjects in this collection include Gamblers Anonymous, Ernest Hemingway, and a reunion of second World War veterans in Las Vegas. It’s a treat for Didion fans but also serves as an introduction to the writing that would become legendary. – Helen Cullen

Described as Normal People for a different generation, A Wiser Girl is set in the mid-70s and sees aspiring young artist Jo Nowd swap a broken heart in Ireland for adventures and revelations in Italy. Language and love, art and sex, everything happens to Jo in an avalanche of experience, changing her and forging something strong and bright. It’s a life-affirming bildungsroman with echoes of Maeve Binchy in its warmth and humour; the novel’s deceptively easy tone belies its serious exploration of the authenticity of self, and artistic practice. Not only is there a real sense of Ireland in that decade, but it captures travel in the analogue age, an altogether different kind of magic. In these chilly, uncertain times, it is a blast of Italian sunshine, a sparkling glass of wine. – Ruth McKee

On the Significance of Religion for Global Diplomacy

Global diplomacy in the 20th century largely treated religion sociologically, assuming Weber’s secularisation thesis that we would “grow out” of childish religion. The eruption of Islamic fundamentalism and other enduring sectarian divisions has disabused 21st-century citizens of this idea, though Ireland arguably required less prompting. It is critical to have sophisticated dialogue about religious differences. This important Irish-led contribution proposes, as the catalyst for a civilisational transformation, a culture of encounter inclusive of the world’s religious traditions enabled by international organisations, including designing an ancient agora-type public space for Europe. The heart of the book is an exploration of axioms to discuss change in an inherently pluralist global society, where essential common ground can be explored constructively from four angles: religious literacy, collective psychology, moral discernment, and personal communication. – David Cowan

In 2013 Ruairí McKiernan was depressed about austerity Ireland, particularly that those who caused the economic collapse had not only escaped unpunished but had actually been supported and enabled, while those who had suffered were abandoned. So he decided to make “a journey into the heart and soul of Ireland” by hitching around part of the country in order to listen and give voice to ordinary people, particularly to discover if they felt hopeful for the future. He heard stories of anger and disappointment at the economic disaster but also stories of hope and resilience, and he encountered numerous examples of community initiative, co-operation and self-help. Combining his own and others’ personal stories, travelogue and advocacy for change, this is a perfect match for these unprecedented times. – Brian Maye

Those magnificent women in their flying machines are the subject, the Irish female pioneer pilots of the 1920s and 1930s. Sixteen are featured, with detailed biographies told against the backdrop of Irish economic, social and political life. Some were from very wealthy backgrounds, others were not. They shared a love of flying, a sense of adventure and boundless courage. Antrim-born Lilian Bland was the first woman in the world to design, build and fly her own aircraft. Limerick native Sophie Pierce won worldwide acclaim for being the first woman to fly solo from Cape Town to London. Monaghan’s Mary Westenra became the first woman to fly from London down the east side of Africa and return by the west side. Michael Traynor’s lavishly illustrated volumes tell a fascinating story. – Brian Maye

Elizabeth Bowen’s writing has undergone a resurrection in recent decades, but it is her life and loves that have opened out the rather amoral world of the English elites, particularly in the interwar years. An impenetrable and unconsummated marriage left plenty of room for ambiguous relationships with men and women. Julia Parry’s fascinating and poetic book is a rich evocation of one such: Bowen’s affair with Parry’s grandfather, Humphrey House, literary critic and teacher. She inherited a box of letters by House and Bowen – unusually, both sides of the correspondence. Parry’s subsequent journey of self-discovery carries her into a love triangle between House, his wife Madeline, and the “shadowy third”, Elizabeth Bowen. – Ian D’Alton