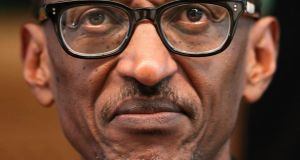 Rwanda’s President Paul Kagame: Kagame is the all-seeing presence in Sundaram’s book. His portrait is ubiquitious. “A big photo pays for your sins,” one Rwandan comments wryly. Photograph: Reuters

Rwanda is an African country like no other. Nearly 22 years after the 100-day genocide that saw 800,000 Tutsis murdered by their colleagues, neighbours and friends, this tiny, landlocked nation has been transformed into one of the fastest-developing countries on the continent.

The streets are spotless, plastic bags are outlawed, and the population of nearly 12 million take part in monthly community service sessions. An inebriated visitor can stumble the streets at 3am without fear for her safety. This is one of the most densely-populated countries in Africa, yet its roads are often empty. Locals speak selectively and simple sentences can be loaded with hidden meaning. This is a country where to discover truth, you have to identify what’s missing, according to a new memoir by Anjan Sundaram.

In Bad News: Last Journalists in a Dictatorship, Sundaram immediately captures the paranoia one feels in a country where citizens are both censored and self-censoring, by launching the reader into a scene where a grenade attack may or may not have recently occurred. A hint of violence glistens: intangible, unverified and speedily denied by a policeman who just happens to be on location.

Through delicate and evocative prose, this book documents the years that Sundaram spent running a journalism training programme for a small group of locals with funding from the European Union. He introduces an easy cast of characters: his students, who are mostly male and perennially frightened.

There’s Moses, a survivor of the genocide, who describes himself as one of the “walking dead” and says he wants to write about the crime of Rwanda’s president, Paul Kagame. Moses accuses the government of “mocking the genocide” and using it to get “pity” from the world. “To control people you need to create a great deal of fear,” he tells Sundaram.

Agnes Uwimana Nkusi makes an appearance: HIV positive, she had already spent more than a year in prison when she joined the class. She has since spent four more years inside, convicted of defamation. Multiple students flee the country after being told their lives are in danger. These include Jean-Bosco, who had been attacked for his work before. There’s also a Judas: Cato. He quickly abandons the ethics being taught and joins the Intore, a group of journalists zealously loyal to the president.

The remaining student journalists combat harassment by the Rwandan police and secret service, and Kafkaesque confrontations with officials. Politics plays out on a micro scale within Sundaram’s classroom, where students switch allegiances and even betray each other. Eventually, one is assassinated.

Meanwhile, subtle reminders of the country’s violent past echo throughout the book, as they do on any visit to Rwanda. Music, played at genocide memorials, involves a haunting repetition of the word “jenoside; jenoside”.

Sundaram – like many new to Rwanda – initially seeks out stories of remembrance and reconciliation, until a student condemns the regular narrative, claiming memorials are tools used to increase trauma in a society where most citizens aren’t old enough to remember the violence.

This book is a timely one. It is being released just over a year after the airing of the BBC documentary Rwanda’s Untold Story, which alleged that Kagame may have been involved in shooting down his predecessor’s aircraft, the incident that sparked the genocide.

The fallout from the film was swift. Last May, Fred Muvunyi, head of the Rwanda Media High Commission, left the country, calling me from the Netherlands to say he was in hiding and feared for his life. A government-commissioned report urged criminal action over the report, and accused the BBC of “denying genocide”. In June, the state issued an indefinite ban on BBC broadcasts in the local language Kinyarwanda.

Meanwhile, Rwanda has steamrolled ahead with a new law to allow Kagame to remain in power until 2034. The former military leader is a fierce, uncompromising, skeletal-looking man. A Tutsi who grew up as a refugee in Uganda, he won 93 per cent of the vote in the last election in 2010, while swearing he wouldn’t run for a third term in 2017, a pledge he went back on only last week.

Kagame is the all-seeing presence in Sundaram’s book. His portrait is ubiquitious. “A big photo pays for your sins,” one Rwandan comments wryly.

Early in the book Sundaram says he is documenting “how dictators destroyed countries, to gain power: they destroyed the capacity for independent speech, then independent institutions – and ultimately independent thought itself”. He keeps having to replace his students.

Sundaram has reported for the New York Times, Associated Press and Granta, among others. This is his second book. His first was the widely-praised Stringer, chronicling his early journalism career in the neighbouring Democratic Republic of the Congo. Sundaram was also the winner of the Frontline Club award for his coverage of the war in the Central African Republic.

Journalists writing about other journalists can seem overly self-referential but that isn’t the case here. Understanding the media landscape in Rwanda is essential to understanding the country. During the genocide “the fire was lighted by the media”, one former killer told me on a visit to a Kigali prison.

Sundaram, his despondency intensifying throughout his account, may declare freedom of speech in Rwanda dead, but – in the same way that his students were repeatedly replaced – the hope is always that new critics will continue to emerge.

Sally Hayden is a reporter for Vice News in London. She won the Simon Cumbers Media Award in 2013 to write about gender equality in Malawi for The Irish Times and in 2014 travelled to Rwanda to report on the 20th anniversary of the genocide