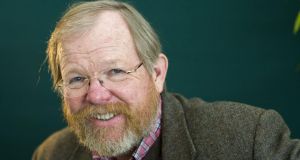 Book Title:
The Road to Little Dribbling: More Notes From a Small Island

Ever since he pottered about Britain, with his Notes from A Small Island, sticking his nose into every small corner of the scept’red isle, an unashamedly Anglophile American, the Brits have taken Bill Bryson to their bosom, charmed by his obvious fondness for their eccentric ways, and the hilarity he finds at every turn of their little roads. In a way that the British find difficult to express themselves, Bryson finds a country that is bewildering, quirky, endearing and beautiful. And to prove it, he lives there.

Notes from a Small Island is the best-selling British travel book ever, and was voted in a BBC poll “the book that best represents Britain”, so the follow-up was inevitable – although it has taken 20 years. The Road to Little Dribbling: More Notes from A Small Island sports a colourful drawing of the white cliffs of the Seven Sisters, and a jolly John Bull-type fisherman. It’s from the South Coast he starts his long walk the length of the island, attempting to follow a direct line from Bognor Regis to Cape Wrath, Scotland’s furthest tip. We won’t be going every step of the way here, but sipping lightly at the delights of Bill’s canny observations.

It’s no surprise that Bryson picked Bognor Regis as a starting-point, in view of George V’s sharp assessment of the town. The king had paid a visit to the place to benefit from its sea air, and returned to London, apparently refreshed. However, he soon fell ill again, and when his doctor suggested he once more should visit the seaside, the King tartly replied, “Bugger Bognor!”, and passed away.

When Bryson arrived on Britain’s shore, he says he found a country that was wholly strange, yet somehow marvellous, a feeling that has never left him. Yet, he’s now living in a country that he doesn’t recognise – a not-uncommon complaint of all of us moving inexorably toward the twilight of our years. He decides to apply for British citizenship to go along with his US passport. We all know what a tedious business applying for a passport is, but Bryson was required to pass a series of exams for which there were helpful “study guides”to aid the hapless alien. One example of the questions will suffice:

(a) a political party,

Bryson passed, receiving a small letter, certifying him as intellectually fit for life in modern Britain.

Bryson has always been a serious, nay, outspoken advocate of nature and its preservation. He dearly loves the countryside he rambles through, bemoaning the disappearance of hedgerows, wild flowers, sheep roaming over fells, churches, barns, even village shops, swept aside on economic grounds. And he’s certainly not a fan of Britain’s National Trust, after some jobsworth refused to let Bill take a photo of an old lighthouse.

The observation, the wit, the geniality of Bryson’s inimitable words illuminate every chapter. Our hero finds himself crossing a field with a friend, who mentioned that there was a bull about 50 feet away. After he and his friend had run to the safety of the other side of the fence, Bryson petulantly inquired why a bull is allowed in a field with a footpath. His complaint was dismissed: “The real danger is cows. Cows kill a lot more people than bulls.” Bryson pursues the fact that cow-trampling is rare enough, but always reported in British papers, and completely ignored in the States, where death by shooting takes precedence. He claims that if he asked a British friend about their chances of being attacked by a cow, the friend would be aware of the danger. An American would reply, “Why would I be in a field with cows?”

Bryson loves London. Not just for its green spaces, its history, its diversity, its startling new skyline, its museums and galleries, but its Underground, of all things. Thank heaven he drew the line at its buses and endless roadworks. At the pinnacle of the great metropolis is Boris Johnson, “a man whose bumbling manner,whose very hair,is a monument to disorder. And somehow, it works.”

I’m not sure that this new view of Britain through Bryson’s now more rheumy eyes is going to meet with the same overwhelming wave of approval that greeted his Small Island. The British are a phlegmatic people, brushing off criticism confidently and easily, but there will be exception taken to the author’s scornful dismissal of such precious gems as Eastleigh, Bournemouth and Lyme Regis, although he was enraptured by Widecome-in-the-Moor. And then, there was Salcombe, fashionable gem in the diadem of Devon. Bit too smart and jaunty for Big Bill’s liking. In the deli there, he ordered Brie and asparagus tart, made with organic cider, which infuriated him.

Apparently, British food had gone from strange and unappetising full circle to strange and unappetising again – he wants a return to fish-and-chips, prawn cocktail and Black Forest gateau. While you’re there, Bill has taken a violent dislike to the country’s bus shelters, the slow disappearance of the London black cab, policemen dressed in yellow vests that make them look like railway workers. And, what happened to policemen’s helmets?

Nobody around here is going to take particularly kindly, either, to Bryson’s ranting that people everywhere have abandoned whole elements of grammatical English, and correct punctuation is a thing of the past. He even has the nerve to drag the revered Sam Cam, wife of the prime minister, into it. She is reported as saying, “Me and the kids help to keep him grounded.”

The great road trip takes a fairly straight line from the blessed Bognor straight through Oxford with diversions to Cambridge and Norfolk, past Blenheim, Birmingham, deviating again to “bracing” (cold,windy) Skegness, where the little fisherman on the front cover hails from, and where that great British institution, the holiday camp, first blared out its welcome to happy campers.

It seems that Bill has grown a little tetchy with the passing years, a good man’s fault, but his altercations with barmen, Big Mac vendors and his outrage at a middle-class woman’s tiny tip to a waiter seem unworthy.

Anyway, onwards and upwards, swiftly past Liverpool, on through Manchester, the Peak District, Lancashire and the glories of Blackpool, the great Tower, the sparkling new Promenade.When Bryson first came there, 20 million happy holidaymakers visited Blackpool every year. Now, according to our guide, it’s depressed and derelict. Bryson wants a return to the old tradition of the seaside shows, and an end to the drunken violence. Who could argue?

The Lake District is beyond criticism and Bryson has a soft spot for Yorkshire, where “they speak as they find”. Although my own favourite Yorkshireism is “I’m only rude to people I like”.

Finally on, after 700 miles, to Cape Wrath, which involves a train journey, a car journey, a ferry ride and a minibus through an uncharted wilderness. And if you miss the last autumn ferry, you have to wait until the following spring.

At Cape Wrath, the long and weary trail no longer winding, Bill Bryson looks north to the polar ice-cap and reflects, with pardonable pride, that, for a few precious moments, he was “the most northwesterly person in Britain”.

There’s a list of the things he likes best about Britain, that includes cream teas, jam roly-poly with custard, country pubs, the shipping forecast and villages with names like Shellow Bowells and Nether Wallop.

I must have missed Little Dribbling . . .

Those Were the Days, Terry Wogan’s debut short-story collection, is published by Macmillan