Betrayal on the Border? Frank Aiken and the joint IRA offensive

Much blame for the failed 1922 IRA offensive in the North was pinned on Aiken, but the author of a new book focuses on Richard Mulcahy and Eoin O’Duffy. Was the offensive simply to buy time before confronting the anti-Treaty IRA, and of decimating a now inconvenient IRA in the North? 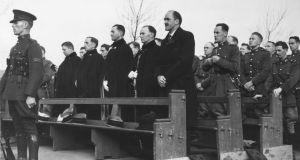 Frank Aiken as minister for defence in 1940 with troops at an open air Mass to celebrate St Patricks Day at Portobello Barracks, Dublin. Aiken appears to have been suspicious of the pro-Treaty side’s motives in proposing the Northern initiative in 1922, particularly in light of the risk it posed to the Treaty settlement. Photograph: Hulton Archive/Getty Images 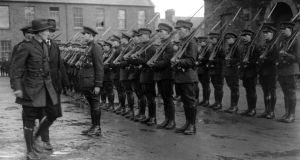 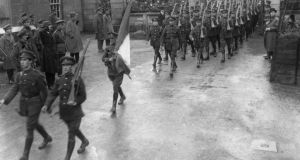 May 1922: Gen Eoin O’Duffy saluting soldiers of the Free State Army, as they march into the Portobello Barracks in Dublin. The available evidence suggests that O’Duffy, as chief-of-staff of the provisional government forces, was in command of the Northern campaign in 1922. Photograph: Topical Press Agency/Getty Images

In the spring of 1922, as southern Ireland drifted towards civil war, rival republican factions conspired to support renewed violence in Northern Ireland. This joint-IRA offensive was envisioned as a full-scale invasion – a campaign of sweeping troop movements and “scorched earth” policies, culminating with an advance on Belfast.

Of course, things did not work out that way. The offensive commenced on May 19th, 1922, but quickly collapsed amid confusion and recrimination. Since then, its details have been obscured by a lack of documentary evidence and the conflicting testimonies of those who were involved. As a consequence, many questions surrounding the episode remain a source of speculation.

One of the more intriguing questions to emerge in recent years has concerned the role of Frank Aiken, commander of the IRA’s Fourth Northern Division, and later one of Ireland’s most prominent statesmen. Aiken was a key player in the planning of the offensive, and was widely reputed to be its chosen leader. His division – which operated in the borderlands of Armagh, south Down and north Louth – was one of the more active and organised IRA units in Ulster. As such, it was expected to play a crucial role in the attack. When the time came, however, Aiken and his men failed to commence their operations. The reasons why have proven elusive.

A 2006 RTÉ documentary on Aiken’s life and career has since popularised one possible scenario. Aiken – it suggested – issued a last-minute cancellation order, and then stood by as units elsewhere in Ulster were overwhelmed by the northern authorities. This narrative of the offensive’s ignominious end was featured alongside the Altnaveigh massacre as one of two great controversies of Aiken’s role in the revolution. It was largely based on the testimony of a less than objective former comrade. But it also reflected a genuine sense of resentment that Aiken’s inaction fostered among his northern IRA contemporaries, particularly in Belfast.

Nevertheless, there are good reasons to question this dramatic tale of borderland betrayal. Chief amongst them is the fact that Aiken – despite numerous claims to the contrary – was not in command of the offensive.

The confusion stems from Aiken’s position as chairman of the IRA’s Ulster Council. This shadowy body was established by Michael Collins in January 1922 to co-ordinate IRA activity in Northern Ireland. It was composed of the commanders of all those IRA divisions with an operational presence north of the border.

Aiken’s position in the Ulster Council was partly a reflection of his stature within the northern IRA at the time, and partly a result of his close relationship with Collins. Yet it was a relatively insignificant appointment. As one close comrade later explained, it carried “no authority whatever but a certain amount of prestige”. Indeed, the council’s most significant operation in the months that followed – the abduction of more than 40 unionists from the border areas of Tyrone and Fermanagh – was instigated by another member, Eoin O’Duffy, the pro-Treaty chief-of-staff, and sanctioned by Collins.

When the plans for an offensive were announced in April 1922, seemingly at Collins’s behest, the Ulster Council became central to its planning. Aiken, meanwhile, was twice offered the role of commanding the campaign, and on both occasions he refused. The pro-Treaty leadership refused to give him a free hand in the matter, and he evidently feared that he would become a convenient scapegoat in the event that it failed. He also appears to have been suspicious of their motives in proposing the initiative, particularly in light of the risk it posed to the Treaty settlement.

It did not help that his relationships with Collins, O’Duffy and Richard Mulcahy (the minister for defence) were becoming increasingly strained, mostly as a result of his neutral stance in the IRA split. Although his division remained nominally under the authority of the provisional government’s department for defence, Aiken had made it very clear that he could not be relied upon for support in any future confrontation with the anti-Treaty IRA.

So if Aiken was not in command of the offensive, who was? The available evidence – though sketchy – would suggest that the task fell to O’Duffy, as chief-of-staff of the provisional government forces. He had the final say on when the operations would commence, and it was on his authority that the original start date was later postponed to allow further time for preparation. A Department of Defence memo on the offensive, composed in 1927, indicates that all operations reports were given directly to him at Beggars Bush barracks. Other circumstantial evidence also suggests that he was in charge of co-ordinating the attacks once the offensive got under way.

If this was the case, who then cancelled the Fourth Northern Division’s participation in the offensive? It has been assumed that the decision was Aiken’s alone. This scenario cannot be ruled out entirely but it seems more likely that the division’s withdrawal from the offensive was related to a broader decision by the pro-Treaty leadership that there should be no fighting on or around the border. Having instigated the offensive for the dual purpose of securing the nominal loyalty of the northern IRA and promoting republican unity in the south through the lure of a common cause, they now sought to hide their complicity.

It was for this reason that three other southern-based divisions had failed to mobilise for the offensive. Logically, it must also have applied to the Fourth Northern Division. After all, its headquarters and the bulk of its active personnel were based in camps in north Louth. It was also occupying Dundalk Military Barracks, ostensibly on the provisional government’s behalf. Indeed, it is telling that the only two divisions that were allowed to proceed with their operations unhindered were those that were based entirely within the jurisdiction of Northern Ireland – the Second and Third Northern Divisions.

Was this a coincidence, or was it the pro-Treaty leadership’s intention all along? Was the offensive simply a means of buying time ahead of a confrontation with the anti-Treaty IRA, and of decimating a now inconvenient IRA presence in the north?

In the absence of further evidence, these questions must remain unanswered. But it is telling that Aiken and his Fourth Northern Division believed that an offensive was still in the offing right up until the provisional government attacked the Four Courts on June 28th, 1922. What is more, they were actively encouraged in this belief by figures such as Mulcahy and O’Duffy. If there was betrayal on the border in the spring of 1922, perhaps its origins were to be found in Dublin.

Dr Matthew Lewis is the author of Frank Aiken’s War: The Irish Revolution, 1916-1923 (UCD Press, Dublin, 2014), available in bookshops and from ucdpress.ie