Below the Rust Belt trilogy, a Famine undercurrent 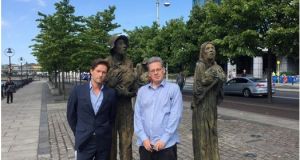 In Michael Collins’s novel The Death of All Things Seen, native Canadian woman Ursula reflects on the forgotten “great lessons” of animal and human migrations. She “talked of First Nations people who bore witness along the Saint Lawrence, in the aftermath of the demise of the salmon, to the arrival of a great spawn of a new human misery, the portal, wide-eyed coffin ships, unloading a grim discharge of Europe’s flotsam. The Irish, most notably, those awful, pale-faced, skeletal wretches, ragged in the embattled way salmon rushed headlong against the current in a death run for the spawning grounds to seed the next generation”.

It is a strikingly original metaphor for the Irish Famine migration of 1847. But the metaphor of spawning also marks Collins’s creative process, his return to the original source and difficult subject matter from which his literary career began.

In an earlier Irish Times article entitled “Remembering 20,000 Famine refugees who died in 1847,” (November 26th, 2016) Collins recalled the creative block he suffered when he began to write a Famine novel and establish his reputation. In his own words: “I would spend a year researching the historical record and in the end wither from the burden of inhabiting the psyche of either the Irish peasantry or the landed aristocracy”.

After that year, the novel remained unwritten. “It lives as a singular literary failure that has dogged me,” Collins adds, “given I would eventually transfer a sociological acuity to all things American, specifically the collapse of American industrialism, as captured in my Booker shortlisted novel, The Keepers of Truth. The question plagued me – how could I stand as outsider, impartial witness, and documentarian to another history whilst my own eluded me?”

The sublimation of Collins’s Famine novel into his rendering of the rust belt in The Keepers of Truth was the making of his literary career, one that now spans 10 works of fiction. His penetrating insight into the lives of the struggling white working-class Americans who people his novels set in the de-industrialised mid-western United States seems prescient now that they have played such a crucial role in delivering the Trump presidency. No doubt the Clinton political machine would have been better served by eschewing data driven micro-messaging in favour of lively discussions and character analysis of Collins’s works. As the documentarian of another history, his Booker nomination was no small compensation for his unfinished juvenalia.

Michael Collins has spawned new forms of creative energy in finding his own way back to the genre. One of his outlets is the extreme travel writing he pioneered fusing the roles of author and athlete

Yet something was lost in Collins’s failure to complete his Famine novel. It is a genre that has come into its own with Sebastian Barry’s Costa Prize winning gay romance Days Without End (2016), Emma Donoghue’s acclaimed The Wonder (2016) and Joseph O’Connor’s intricately-plotted, faux-Victorian murder mystery and bestseller Star of the Sea (2003).

Michael Collins has spawned new forms of creative energy in finding his own way back to the genre. One of his outlets is the extreme travel writing he pioneered fusing the roles of author and athlete when Collins ran over 900 kilometres last summer in the footsteps of the Famine Irish from the Grosse Ile quarantine station in Quebec to Ireland Park in Toronto. Not only did he run a marathon a day every day for a month, but he also filed crisp and incisive stories about his discoveries and the people and places he encountered along the route that could only be the envy of more sedentary, desk bound writers.

Before embarking on the run, Collins had paid a visit to the Saving the Famine Irish: The Grey Nuns and the Great Hunger exhibition at Quinnipiac University which was launched by President Higgins when it transferred to the Glasnevin Museum in September 2016. He also read the eyewitness testimonies of the Grey Nuns who cared for Famine Irish emigrants in the fever sheds of Montreal in the digital Irish Famine Archive that I curate. “The most striking fact that emerged in reading the transcribed documents from the time was,” for Collins, “how the municipal authorities, in tandem with the religious orders of Montreal, had marshalled their collective resources to care and minister to the sick and dying Irish,” especially the hundreds of orphans who were adopted by French-Canadian and Irish families.

Yet he was also struck by the sheer incongruity between the Grey Nuns’ stories of compassion, devotion, and self-sacrifice and the stark Black Rock memorial that marks the site where 6,000 Irish fever victims lie buried. It is not only the largest Famine Irish mass grave in North America, but also the most dangerous visit. Indeed, it is situated on a traffic meridian on the busy highway approaching the city’s Victoria Bridge, built by Irish labourers in 1859, while the remains of the Famine dead lie under the asphalt of an adjacent, overflow parking lot that is owned but rarely used by Lotto Quebec. “Why are 6,000 Irish buried under a Montreal traffic island?” Collins asked in one of his Irish Times articles during the run (June 23rd, 2016). It is a question that far too few Quebecers ask themselves.

From May 27th to June 1st, 2017, Michael Collins will join a group of  walkers to follow in the footsteps of these 1,490 Famine emigrants from Stroketown to Dublin along the Royal Canal

The Black Rock is also the grave site for some of the 1,490 tenants who were forced to emigrate in 1847 on some of the worst of the coffin ships, such as the Virginius and the Naomi, from the Strokestown Park House Roscommon estate of Major Denis Mahon (who was assassinated in November 1847), now the home of the Irish National Famine Museum.

From May 27th to June 1st, 2017, Michael Collins will be joining a group of Famine walkers to follow in the footsteps of these 1,490 Famine emigrants from Stroketown to Dublin along the Royal Canal. The Famine walk is being organised by the Irish Heritage Trust and Famine Museum in partnership with Waterways Ireland to help establish a new Famine trail. The journey will provide Collins with a new narrative arc to follow the one he created during his Irish Diaspora Run 2016. It is also the narrative arc of a writer returning to his unfinished Famine novel.

Dr Jason King specialises in intercultural performance at the intersection of migration, memory and literary studies in the past and present. His publications include Irish Multiculturalism in Crisis: Integration, Migration, and Recession in Contemporary Ireland, Irish Global Migration and Memory and Memoir, Memory, and Migration in Irish Culture. His blog IrishFamineResearch publicises new research on the Irish Famine migration to Canada in 1847