Baileys prize goes to The Power, a dystopian thriller with a feminist twist 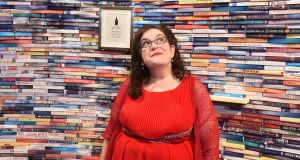 Naomi Alderman, winner of the 2017 Baileys Women's Prize for Fiction for The Power. Photograph:Tabatha Fireman/Getty Images

Each passing day appears to confirm that dystopian terrors are no longer futuristic, they belong to the now and are, increasingly, our today. The winner of the 2017 Baileys Women’s Prize for Fiction, which has just been announced, confirms this with unnerving topicality and chilling exactness in the depiction of human misbehaviour as well as an impressive, ever commendable lightness of touch. Naomi Alderman, one of three Britons on a shortlist of six writers, has triumphed with a feminist thriller called, fittingly, The Power, in which women are the new masters, or are they?

It is Alderman’s fourth novel and it bears the influence of her mentor, Canadian seer Margaret Atwood, with wit, candour, astute insight and graphic violence. There is a global quality as her four central characters traverse the continents with all the speed of our internet age. Suddenly the most menacing sight is that of a teenage girl empowered with the ability to inflict pain and even death with a finger’s touch.

Told with panache and imagination, it is unapologetically commercial and is already a bestseller, probably well en route to becoming the bestselling Baileys winner to date. The prose is efficient, with a clear-eyed ferocity kept in check. Alderman does not dwell on sentence-to-sentence literary effect – she has a good ear for dialogue, which is particularly strong in the sequences featuring Roxy, the daughter of a London criminal.

Alderman, who also designs games and writes a smartphone adventure app, succeeds in being savvy without appearing oppressively knowing. If ever there was a reader-friendly book, this is it. Imagine a Guy Ritchie movie and you will easily stride into a book which gathers pace, particularly from about the half way marks of its 340 vivid pages. It is a yarn? Certainly, and what a caper, so close to our communal bone, it hurts.

Her references to the United States will cause a reader to pause and blink, before realising that The Power was written before the unthinkable happened and America disgraced itself. If President Trump could read a book, or even if he possesses the ability to experience shame, The Power, might make him cringe. It will make readers think and reconsider our world.

In ways The Power is a Jacobean tragedy of the 21st century, it is also a bow to Atwood’s classic The Handmaid’s Tale, only Alderman has carried the story on to where we are now – humans are no longer even pretending to be decent – this is about survival and the need to avenge centuries of hurt.

But Alderman is no stoic. Her vision is neither sentimental nor nostalgic, or soft in any way; her sense of irony has led her to a profound conclusion about the corrupting taint of power – no matter who wields it.

Now in its 22 year, the Baileys prize honours fiction written in English by women. This year’s shortlist of six included a previous winner, Linda Grant, who was this time shortlistedfor The Dark Circle, set in 1950s Britain and a tuberculosis sanatorium. The third British contender, Gwendoline Riley, featured with First Love, her sixth novel, in which a familiar Riley narrator – a writer – battles her personal demons in the form of love and the need to write.

C.E.Morgan, the only one of a trio of Americans to survive to the final six, earned her place with her second novel and 2017 Pulitzer Prize for Fiction finalist, The Sport of Kings, a family saga about horse racing and the breeding of winners for glory set against a backdrop of racism and slavery in the US south.

The Power, a brave and shrewd choice, takes one by the shoulder and shakes any lingering traces of complacency

There were two books which seemed likely to challenge Alderman: Stay with Me by the Nigerian debut novelist Ayobámi Adébáyo and Do Not Say We Have Nothing by Canadian-born Madeleine Thien, the daughter of Malaysian-Chinese immigrant parents. My heart would have given the prize to Stay with Me, for its charm, and engaging narrator whose initial joy is destroyed by life. My head would have voted for Thien’s accomplished, somewhat symphonic third novel which looks at the tragic evolution of modern China. It is an important book and one executed with grace and dignity.

Yet The Power, a brave and shrewd choice, takes one by the shoulder and shakes any lingering traces of complacency. The human race needs to recall, or in many cases, finally develop some semblance of fair play. Everyone can read this book; everyone should.

Alderman, who was born in London, appears to have looked that bit closer at our ongoing mess. She sees the menace lurking at the core of too many of us, in a world run by bullies and cowards, power is indeed a dangerous commodity. If her book is a feminist book, so be it, but it is a humanist book, advising all of us to stop and think. Sure there is humour – Alderman is a witty communicator – but The Power is serious and no one could accuse it of being fake news.

In this year, the 350th anniversary of the birth of Jonathan Swift, Naomi Alderman set not one but four Gullivers out on reconnaissance. Dystopian? Futuristic? No, more like of the moment and disturbingly so. Alderman may be a feminist yet seems to be more interested in fair play by and for all humans and has written a narrative of wide-ranging appeal. Never before has electricity been quite so electric.