Back to the streets of Baltimore: A wise new book on The Wire 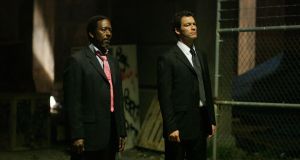 Book Title:
All the Pieces Matter: The Inside Story of The Wire

For long-time fans, the cold, hard, bathetic but compelling streets of Baltimore have never really washed away from our cultural map. The Wire departed TV screens a decade ago, yet the rich seam running through our present golden age of television was arguably mined across its five series (and from that other mighty HBO epic, The Sopranos).

The Wire’s esteem increases year-on-year; partly due to its overriding influence on any TV series post-dating it, mainly due to a production standard that never slipped below “inspired” across the noise and busyness of 60 episodes.Yet Jonathan Abrams must have required a certain degree of courage to produce a book that aims to send a fresh pulse through a series that, although widely regarded as a circuit board of brilliance, has been off the air for some time. There’s also the consideration that a handful of books have been written about The Wire already, including one by series creator, David Simon. And how to document and dissect a television series as complex as this one? As Det Jimmy McNulty might say, “What’ve ya got for me?”

Abrams meets the challenge wisely, showing no little street smarts of his own. Any charge that a book like this could be superfluous, or merely a cash cow on the back of a renowned television programme, is countered by the author finding the smartest trip switch he could possibly engineer: he places the main players on The Wire at the heart of the book. What we have between the covers is some context for each series, but mostly a flow of conversation from the talent involved in front of, and behind, the camera: from Simon and co-creator Ed Burns; to the actors, writers, production units; the author even takes Det Lester Freamon’s advice and “follows the money” by including the thoughts of HBO executives.

Voices drop in and out, in paragraph-sized soundbites, talking openly, engagingly and chronologically on The Wire’s evolution; they talk about the precariousness of the show’s future throughout its production cycle, which any fan may find hard to imagine now looking back down the line. The format makes All the Pieces Matter highly readable, either in large chunks or for dipping into, and the voices on the pages feel as real as to what the artists put up on the screen (even the actors rarely cross the “luvvie line”, which is quite an achievement when you encounter thespian interviews).

On finishing All the Pieces Matter, the reader finds a deeper sense of what made The Wire so special: from the deep bonding of the cast and crew; the disagreements and fallouts (hagiography is not on the radar of any of the contributors, thankfully); salacious stories such as the drinking sessions away from work involving McNulty and Bunk. The book is also full of funny titbits, such as the fact that Clay Davis’s unforgettable catchphrase reads as nine e’s on the script.

All the Pieces Matter contains plenty of insight, much unbeknownst to this reader and fan of the show. One is told of how, behind the scenes, Bob Colesberry – who had a minor onscreen role as Det Ray Cole – became the weathervane for what way The Wire would blow, until his sudden death in 2004 as production cranked up for the shooting of season three.

The Wire writers elucidate character inspirations and story arcs throughout, which throws light on shadows of many stories left unsaid. The reader also realises how lines sometimes blurred between fact and fiction on the show, especially when it came to the devilishly street Snoop, portrayed by Felicia Pearson.

Michael K Williams, who played shotgun-wielding, drug-gang hustling, maverick Omar Little – who mashed the emotions of viewers in every sense – met Baltimore-native Snoop in a local nightclub. She had been convicted of second-degree murder aged 14 and served nearly seven years at the Maryland Correctional Institution for Women. Williams accompanied her to the set, and she was offered a part as an enforcer in the Marlo Stanfield gang. She kept her real-life nickname for the show, Snoop. As Williams says, “She could have made some other decisions coming out of prison, you know what I mean? I had something to do with her not doing the same thing that got her in the first place. That will be the greatest reward I will ever have from The Wire.”

We also find lots of interesting production notes in All the Pieces Matter. The crew always strove to avoid the obvious – cinematographer Uta Briesewitz was adamant against using handheld cameras in the projects or filming drug dealers, therefore stylizing the streets, stripping them of their essence. “What these drug dealers are doing is well thought out, I just don’t see that it deserves any less control, visual style or elegance than we apply outside the projects, ” she explains.

The fact that there is no incidental music in the show is another useful nudge for fans; talk about a brave move for television, no triggers to tell the viewer how to feel or react. The great tunes in The Wire come from jukeboxes in bars or from car stereos. This book is full of nuggets that any fan will enjoy.

Williams, who became one of the stars of the show in what was his first significant role, tells how after a few days on set he had never even met David Simon, but received a call from him saying, “Man, I wish I would have known in the beginning that you were going to bring it to where you were, because I would have made you [and your gang] kind of like my Wild Bunch”.

Williams replied: “What do you mean Wild Bunch? That was probably the first and only homework David ever gave me. ‘Go watch The Wild Bunch’.”

Good advice. Go watch The Wire, too, if you haven’t already. Then read All the Pieces Matter.