Joe Good, a Londoner of vague Irish roots, fought in the GPO and wrote a fascinating footsoldier’s memoir of the Rising 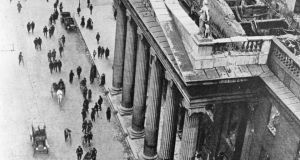 IThe shattered remains of the GPO after the Easter Rising. The surprisingly high number of British-born Volunteers in the GHQ in Moore Street (the burning GPO having been evacuated) were resolutely opposed to the leaders’ decision to surrender. It was accepted that the leaders were going to be executed. The question being debated was how far down the ranks the British would go. They all reckoned that, given their English accents, they would be given “special treatment” by the British soldiers, perhaps even summary execution. Photograph: Hulton Archive/Getty Images

This is the story of Joe Good by Joe Good, a young man of the diaspora who set foot on Irish soil for the first time in February 1916. His Irish heritage was based more on the historical memory of his family than on which forebear emigrated when. His family was London-Irish, working-class (he left school at 14) and resolutely anti-imperialist. His son, Maurice, in a preface, writes that his father “believed he came from Irish stock” and, early on, dropped his too-English-sounding first name Alfred in favour of Joe.

Joe knew no one in Ireland, yet he came from London to liberate his ancestral home from British imperialism – and to shoot British soldiers.

Robert Ballagh, in his introduction, hopes that the anniversary next year will initiate a national debate as to “whether the dreams and aspirations of a truly heroic generation have been fulfilled.

The value of this book is that, like Frank Robbins’ Under the Starry Plough – the Story of the Irish Citizen Army, published in 1977 and now unfortunately out of print, it is the narrative of a young soldier, rather than that of a leader. And in particular, the story of an English-born Volunteer who, perhaps because of his English background, has a more detached view of events unfolding around him.

With one exception perhaps. It was Saturday and the surprisingly high number of British-born Volunteers in the GHQ in Moore Street (the burning GPO having been evacuated) were resolutely opposed to the leaders’ decision to surrender and had decided, come what may, to keep on fighting. It was accepted that the leaders were going to be executed. The question being debated was how far down the ranks the British would go. They all reckoned (Joe included) that, given their English accents, they would be given “special treatment” by the British soldiers, perhaps even summary execution. Better to go down fighting than to be executed or conscripted and used as cannon fodder.

Patrick Pearse had gone to surrender to General Lowe and the wounded James Connolly had been evacuated to another building. One by one, the four remaining leaders present spoke to these men and tried to avert an open mutiny. First, the universally respected Tom Clarke, then Michael Collins (by now recognised as a leader), then Joe Plunkett, clearly weakened from TB and the toll taken by the week’s fighting. Though the speeches were heartfelt and impressive, the English-born contingent remained unmoved. Then Seán MacDermott, suffering from polio, stepped up, leaned on his cane and asked them what exactly they wanted to do. After they had had their say, he had his.

The author comments: “His was the most powerful personality I’d ever encountered. I don’t know if he was a Marxist . . . but it was the sheer scale of his persona that mattered.” He invited them “to take a long look at the dead civilians lying outside our windows” and reminded them that “the civilians nearest us were all very poor and would [if fighting resumed] be butchered with us”. He said that the worst that the English-born would get was a few years in jail. (In the end these men were released by Christmas.) MacDermott made it clear that he wanted them to survive to carry on following the execution of the leaders. He carried the day. Joe wrote that while Pearse was the soul of the Rising and Connolly its heart, MacDermott was its mind.

The book contains many vignettes: of Pearse and Connolly, many of Collins, of tea with de Valera, and of Brugha, Liam Lynch and many others. But just as importantly, of lesser personages and of small details.

Joe recounts how the leaders had provided batons for police duty. How optimistic they were – or perhaps realistic! Indeed, they were probably in use on Tuesday, when the citizens of Dublin had a field day looting Clery’s department store and other shops. Joe had a clear view of this from his barricaded position at the corner of O’Connell (then Sackville) Street and Bachelor’s Walk (until they had to evacuate on Wednesday to join their comrades in the GPO). Joe was even offered a new motor-bike for 10 shillings by a young boy.

Joe agreed that the British Army protected the rebels from attacks by the citizenry of Dublin, especially the “shawlies”. People shouted, “Bayonet them”.

Following the surrender, while in Frongoch internment camp in Wales, the military doctor there said that, as armies go, the Irish fighters were unique in his experience as he failed to find even one instance of venereal disease among the 1,800 prisoners. One Volunteer, on hearing this, fearing that they would not be considered a real army, declared that “he would personally take measures to see that our reputation was redeemed”.

In April 1918, during the conscription crisis, Cathal Brugha selected Joe and nine others to go to London to liaise with him, Brugha, to be ready to carry out executions at short notice of individual members of the British Government – when GHQ in Dublin gave the order. Joe’s target was Bonar Law, chancellor of the exchequer. Joe followed him everywhere, learned his habits and waited for the order. It is not completely clear from the book whether this hit squad was acting to prevent the British Cabinet from implementing conscription in Ireland by assassinating them in advance, or as a reprisal for having done so.

Inevitably, the squad got very nervous tailing their quarries with revolvers in their pockets, waiting for the go-ahead, being told to get ready to act, then being told that it was off. Joe relates that, on one occasion, Brugha and two members of the squad, all armed, managed to get into the visitors’ gallery of the House of Commons “to test the possibilities”! Twice he got the word to go to Downing Street only to have it postponed at the last minute. Weeks stretched into months. Eventually, the threat of conscription in Ireland eased and the squad was recalled to Dublin in August.

Joe knew Michael Collins in London and came to admire him greatly. He called Cathal Brugha “the noblest Roman of them all”. Joe had great praise for Connolly’s courage and leadership. He led sortie after sortie until shrapnel smashed his ankle.

Also coming in for special praise was the Citizen Army. “Tough nuts,” Joe called them. Detailed for special duties, they were crack shots and Joe made it clear that he liked them being around.

This book is to be greatly welcomed and fills in the little details. I expect that with the release by the Bureau of Military History of the individual statements of IRA volunteers from the 1916 - 1921 period, there will be many more accounts like Joe’s published. We should welcome them all and let historians (in the broad sense) sift through them.