An author in Wonderland: ‘I fell down a rabbit hole’

Angeline King, author of Snugville Street and A Belfast Tale, traces the ups and downs of her journey as a self-published writer 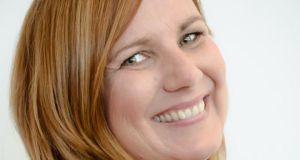 Angeline King: I need to keep, through all my riper years, the simple and loving heart of my childhood and the dream of Wonderland

I was beginning to get very tired of it all.

I was thirty-eight and a half.

Later that week, at a conference, I was considering in my own mind (as well as I could, for the long flight had made me feel very sleepy and stupid), if the pleasure of writing a book would be worth the trouble of getting up and finding a story, when suddenly two Americans with a commanding stage presence caught my attention. “Write down your own goal today,” they cried as they strutted and rooted and tooted across the stage.

There was nothing so very remarkable in that, and I suspect the other 999 people in the audience were either crushed by the weighty sense of positivity or busy calculating goals in their minds, except that I was not meant to be one of them. I was there to work; not make life-changing decisions. In another moment, I followed the Americans down their aspirational rootin’ tootin’ rabbit-hole. The positivity appealed to my sense of child life, you see.

It happened, by coincidence, to be a conference down under on the Gold Coast.

The return flight was days later. Only a guilty mother would travel to and from Australia within seven days.

A few weeks passed by and I became sick. I was coughing and gasping for air in the middle of the night. Doctors couldn’t solve it. They didn’t suspect that I was falling down, down, down into an author’s deep well.

I began to write. I found an old novel, the second attempt at novel writing, the one I made when I was 30. I dreamed scenes through the day, wrote each night and finished that novel inside four weeks. I couldn’t rest. I couldn’t stop reading and writing. I was on medication for the breathing problems, but the irrational thoughts of my breath stopping some day unexpectedly propelled me to keep writing.

My 39th birthday passed me by as a keyboard on an old laptop clacked late into the night. The words were calling, “WRITE ME!”

“What a curious feeling!” I ought to have thought.

“This is wile strange!,” was what came to mind.

Curiouser and curiouser, I continued to write. Friends and strangers helped and encouraged me. Soon, I had written two novels. I began editing the second. I resigned from my job. I left a great big salary behind.

At times, I wanted to run towards the little door, but it was shut, and I had to keep writing.

I opened a Facebook Page. I told the world. The followers grew and grew, but I had a following and no book to show. I was drowning in my own fear. I closed the page. I opened it again. I closed it. I opened it.

I hired a professional reader to assess the second manuscript and drowned all over again. I wasn’t cut out for this world. I didn’t belong in the rabbit hole. But there were people on my Facebook page telling me they wanted to read my book.

I began to produce nostalgia pieces, mostly fictional, and words trickled from my earliest memories, words I’d overlooked since my child-life in a Wonderland of long ago. People loved what I was writing on the blog.

I began my third novel as a full-time writer and retreated from the world for eight months, writing with precision and purpose, not wasting a moment of my life when my children were asleep or at school. Lunch breaks were out. Coffee dates with friends were out. Nights out were in.

I gave my Facebook fans half of Snugville Street, my third novel. Building a tribe, the American marketing books had said. It helped a little and people were eager for more.

My editor loved the book. That’s a good enough reason to publish a novel when you’re down a rabbit hole.

I self-published Snugville Street just after my fortieth birthday. I was advised to self-publish, but I’ll spare you the long tale.

The words came from nowhere after Christmas. “WRITE ME!”

I looked at the second novel, the one that the professional reader had read and I rewrote it.

Until a click changed everything and I was a member of Women Aloud NI. I went to the Playhouse in Derry and read a comical passage from Snugville Street that had me drowning in more tears; laughter this time.

Curiouser and curiouser I grew.

“Why are there no famous Protestant protagonists in modern Irish fiction?” someone tweeted.

I needed to find the answer. WRITE ME, called the words again. And I did. I wrote about Protestants, and the doors flung open and footmen bowed. I wrote about Ulster-Scots and befriended Twitter in the process.

A friend’s dad read A Belfast Tale and cheered me on. “It’s brilliant,” he said. “It made me laugh and cry,” he said. And that’s a good enough reason to publish a book if you’re down a rabbit hole.

I self-published A Belfast Tale eight months after publishing Snugville Street. I was 40 and a half and up to my eyes in media, marketing, Protestant seminars, cake and bits of mushroom.

My savings waned; my confidence withered. I was drowning in my own fears. I shrank again.

Curiouser and curiouser still, there was an academic conference on loyalism and I was invited. You might say that it was a tea party of sorts and I had to grow again.

One man told his story. He’d been to prison; he’d lost everything. He wanted to know when he would be forgiven, when he would be seen as a human and not an ex-prisoner, when the media would allow him a human side. His story was Harry Adam’s story with more reality and less charm.

Harry Adams is a character. I gave him three dimensions.

Then, the strangest thing occurred.

I didn’t meet the Queen of Hearts.

No, I met a former IRA man.

And I was in my child-life again as I recalled a day, long ago, on Waterfoot beach. “The man behind you is in the IRA,” my dad had whispered to my mum. I felt certain that the sand would explode. But I listened and he had an ordinary voice and he was telling an ordinary tale.

“What a curious thing,” I ought to have thought. “I’m a bit feared,” was what came to mind. I got up and kicked in the sand, and looked at the IRA man behind me. He looked like a dad. Perhaps I thought of him when I dressed an IRA man up as Santa in Snugville Street.

Curiouser and curiouser, my dad said after the meeting, “That’s the IRA man who sat behind you all day on Waterfoot beach.”

Things got more confusing, like managing a flamingo in a game of croquet. Three weeks in and online sales of A Belfast Tale were stagnant. I was distracted by so many things, not least the realisation that there wasn’t a chance of turning a profit on each book. I began to plough through the expenses. I abandoned that task in another pool of tears.

One year and a half down a rabbit hole with no salary and I knew I had to walk away.

I applied for a serious job, a kind of dream job for someone who hadn’t dropped down a rabbit hole Down Under.

I didn’t get the dream job. Quite possibly, it was someone else’s dream.

Because I need to keep, through all my riper years, the simple and loving heart of my childhood and the dream of Wonderland. I need to make the eyes of my own children bright and eager with many a strange tale.

I need to write to remember my own child-life, and the happy summer days.