An ageless pleasure: a Bealtaine diary by Brian Leyden

Many of my generation have lost or stand to lose their parents, and the narrative of Old Flames seems to touch complex and previously unacknowledged depths of emotions 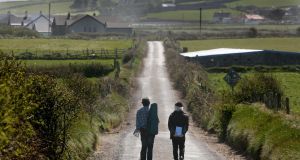 Brian Leyden, right, with musician Seamie O’Dowd: “In literature, Tom McCarthy says, ‘there is now no place where the moderately educated man can go to repair his soul. There are now no books that are the literary equivalent of a large bottle of stout.’ With Summer of ’63 I just may have produced the literary equivalent of the large bottle of stout.” Photograph: Brian Farrell

When do you start being old?

In a public interview after he won the International Dublin Literary Award for his novel Family Life, Akil Sharma said that as a child growing up in India he thought: “I am good at playing cricket and good at flying kites; I’m about as old as I need to be”. When Age & Opportunity invited me to be the national writer in residence for the Bealtaine Festival 2016 – a celebration of creativity as we age – the question occurred to me, when do you start being old?

According to the US comedian, George Burns, a sure sign of age is “when you stoop to tie your shoe laces and wonder what else you can do while you’re down there”. But what if you didn’t know your date of birth? What age would you suppose yourself to be?

Until my middle forties, I inwardly considered myself to be 27. Approaching 50, I had to ratchet up this private sense of my own age to thirtysomething. And even then I understood what the writer VS Pritchett meant in an essay on being 80 where he says, “I know one thing for certain: I was far, far younger in my thirties than I had been in my twenties, because my heart was fuller at 30, my energies knew their direction.”

And unfailingly on hand to meet me on arrival in Longford, Carrick-on-Shannon, Sligo, Portlaoise, Navan and Pearse Street in Dublin is Cormac Kinsella: the very definition of someone who knows the ropes. Whether it’s a theatre, arts centre or a desolate broadcasting centre, he is the tiger-balm that removes headaches and orientates the dislocated. To paraphrase Tom Waits, he “turns a sandwich into a banquet”.

Celebrating its 21st year with its theme of Iconic Citizens, Bealtaine kicks off for me with a matinee and an evening performance of Old Flames at the VOLTage festival in Ennis, a three-day event, which is part of the Clare County of Culture programme. Old Flames blends the spoken word with music by Sligo musician Seamie O’Dowd, and considers life in Ireland from the 1940s to the present day through its musical traditions.

The event is overseen by a human whirlwind of positive energy, Liz Kelly, the director of Glór. Tara Byrne, the programme manager for arts and culture with Age & Opportunity, also sits in on the show. She finds herself unexpectedly moved and taken emotionally off guard as the performance charts the course of my parents’ lives, their courtship, marriage, emigration, taking care of elderly parents, bereavement and choices around retirement. Likewise, a friend who comes along to Old Flames in the Workman’s Club in Dublin, where it is part of the International Literature Festival, finds himself in tears. Both our fathers were gardeners and with the end of life near for his Dad, my stories trigger intensities of feeling and recollection he had not anticipated. Many of my generation sandwiched between child rearing and looking after aged parents, have lost or stand to lose their parents, and the narrative thread of Old Flames seems to touch complex and previously unacknowledged depths of emotions.

On a separate but not unrelated occasion, I find myself walking in new grass in the fields of a farmer who knows that we both grew up in a world of beguiling contraptions. He is keen to show me a splendid antique Alfa Laval milk separator, which he and another man have reassembled, tested and restored to full working order. I turn the handle manually and hear a bell ring. My guide makes me crank the handle faster until the bell falls silent as proof I have reached a proper operating speed. His face radiates pride and delight in the timeless ingenuity of the thing, which is the very essence of its beauty.

The response of the men especially intrigues me. It is often the case that around a table with 12 people at the writing workshops I am contracted to deliver there are few or no men whatsoever. Notably, though, when men show up they tend to see themselves as writers with a particular project in mind. They are working towards an end rather than attending out of curiosity, or out of a willingness to give it a go.

At the same time it is the women who buy the books, and women who are my biggest readers. So I am gratified to find with my new novel, Summer of ’63, women report how men are borrowing the book and refusing to give it back until they have it read.

The poet librarian, Tom McCarthy, recollects in A Poet in the Library how his father, and men like him, once borrowed Zane Grey westerns from the library, and he laments the passing of what he sees as the steady, long-suffering silence of men like his father, and “their spiritual westward soul-searches where a man could befriend a colt and converse with tumbleweed”. In literature, McCarthy says,”there is now no place where the moderately educated man can go to repair his soul. There are now no books that are the literary equivalent of a large bottle of stout”. With Summer of ’63 I just may have produced the literary equivalent of the large bottle of stout.

In the current funding environment, where budgets have been cut wholesale, the country’s libraries continue to generate public events, work and income for jobbing writers. And as the month-long residency comes to a close I am with Germaine Greer when she sums up libraries as “reservoirs of strength, grace and wit, reminders of order, calm and continuity, lakes of mental energy, neither warm nor cold, light nor dark.... In any library in the world, I am at home, unselfconscious, still and absorbed.” To which I might add the Bealtaine residency confirmed for me that libraries are a truly ageless pleasure.

Brian Leyden was the writer in residence for the 2016 Bealtaine Festival, an Age & Opportunity initiative to encourage creativity as we age